You are here: Home / Travel & Finance / Down to 3 Euros on an Irish Island 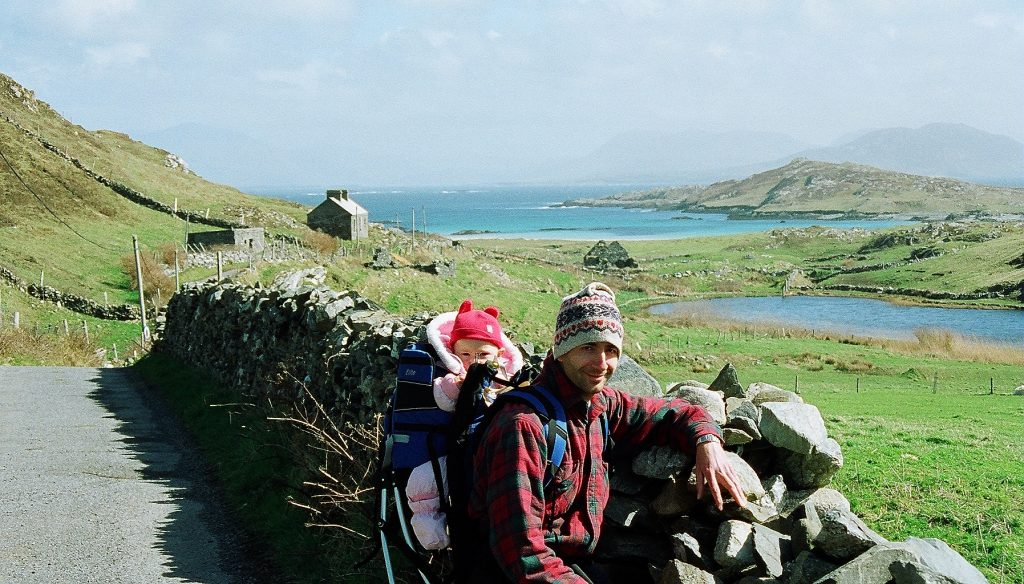 We were down to 3 Euros. A 1 Euro and a 2 Euro coin. We had plenty more vacation-reserved money in the bank, but we were a sea away from an ATM. We were on Inishbofin – a small lightly-inhabited island off the west coast of Ireland.

Not that there was much to buy, anyway. As far as I could tell, there was one commercial establishment on the whole island: The pub/grocery/outfitter/gift shop that we encountered at the end of the ferry dock. Nora, not feeling well, had raced inside.

I wasn’t far behind. In the cash-only shop, my eyes lit on a hiking map of the island. Two and a half Euros. Leaving us with not much, except a couple granola bars and a bag full of baby supplies.

Buy the map or wait for Nora? I was scared she might want to blow the cash on an Irish pepto-bismol, leaving us to aimlessly wander a couple roads, then recline in front of the pub’s peat fire. Something we could have done at the mainland B&B.

Might be one of those “better to beg forgiveness than ask permission” times. We both liked to hike, so I was feeling pretty confident. 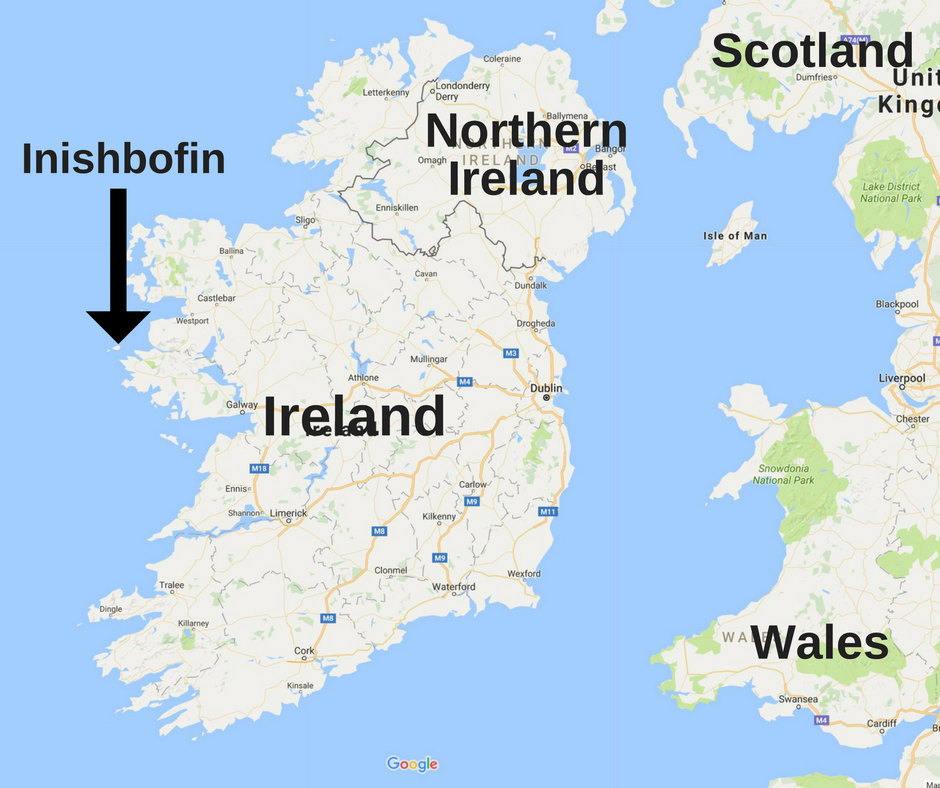 For a proper retelling, I need to back up. If you know Nora, you know she loves to travel. (We lived the first five years of our married life in a tiny Baltimore studio condominium, where the monthly utility bill exceeded the mortgage, just so we could travel.)

Then Pippa came along. Still, we were determined to see the world.

Then Nora was pregnant with Grey. Can you still travel internationally with a toddler and a baby? Without breaking the bank? Without squeezing every ounce of fun out of it? We weren’t sure, so we planned this last hurrah trip to Ireland, just in case.

To be deliberate about activities that would appeal to both of us, we’d each get half the vacation to plan. For one of my days, we’d take the ferry to a rugged, romantic sea-swept island. An ardent consumer of romance novels, Nora would be so thrilled with our novel-sprung-to-life that she’d forget that she didn’t plan it herself.

Up at the break of dawn, Nora, Pippa, and I made our way to the dock in Cleggan, where the ferry launched. Pippa was 14-months old, but hadn’t shown any interest in walking yet; she was more than happy to be toted everywhere. I was the toter.

Nora was 5 months pregnant. Past the nauseating morning-sickness stage, but not yet to the walk-like-I’m-carrying-a-heavy-bowling-ball stage.

For a small island destination, we were impressed with the size and sleekness of the docked ferry that was scheduled to take us there. But a 9:00 AM departure became 9:15, then 9:30, then cancelled. If we still wanted to go, we would have to hitch a ride on the island’s small grimy supply boat.

We were game. The choice was to fight for an indoor seat or to hang outside, leaning on a pile of mail, concrete blocks, or cartons of dried milk. Or wedge in on the half seat by the motor, which reeked of diesel.

Nora subtly pulled her maternity shirt tight against her belly, so it was obvious she was either pregnant, or the unfortunate victim of a distended gastrointestinal system. Either perception was good. Her belly as staff, the other tourists and island residents parted like the Red Sea, giving us direct passage to the indoor seating.

Did I mention it was windy? It was windy. Not a problem in the protected cove, but when we turned for the open sea, our little boat was tossed like a dead fly in a toddler’s bathtub. Nora told me later that she kept her breakfast intact by concentrating on the horizon, with only occasional snatches to appreciate the bulging guns of the captain – no doubt earned honestly by wrestling with the boat’s wheel on a twice-daily basis.

Pippa was not so serene. When it became obvious that I would be insufficient to protect her from the boat’s wild gyrations, she climbed me like a ladder (looking for dry land?), then wailed inconsolably for an extended period. Then as quickly as it started, it stopped; she passed out in her mother’s arms, totally spent.

Eventually, we made it to shore. Nora, her equilibrium thrown off by the sudden transition to stable ground, passed off the still-unconscious Pippa and raced for the toilet. I wasn’t feeling great, either, but good enough to shop. 🙂

Fast forward to me informing Nora that I’d spent the last Euros on a trail map. Her countenance went from a look of general malaise, to disgust. “Once we hit the trail, you’ll feel better,” I tried to assure her…and me.

She did feel better, and we walked and walked. Then came a tricky section of trail. You had to navigate down a short vertical rock face, utilizing toe holds and a hanging rope. At the bottom, Nora exploded. “That’s it! I’m pregnant, I don’t feel well, Pippa’s antsy, and you go right on with what you want to do!”

When I turned around, it hit me like a Conor McGregor punch. Just past Nora’s moist eyes, I could clearly see the absurdity of the terrain that I had just forced her to scale down. What was I thinking? 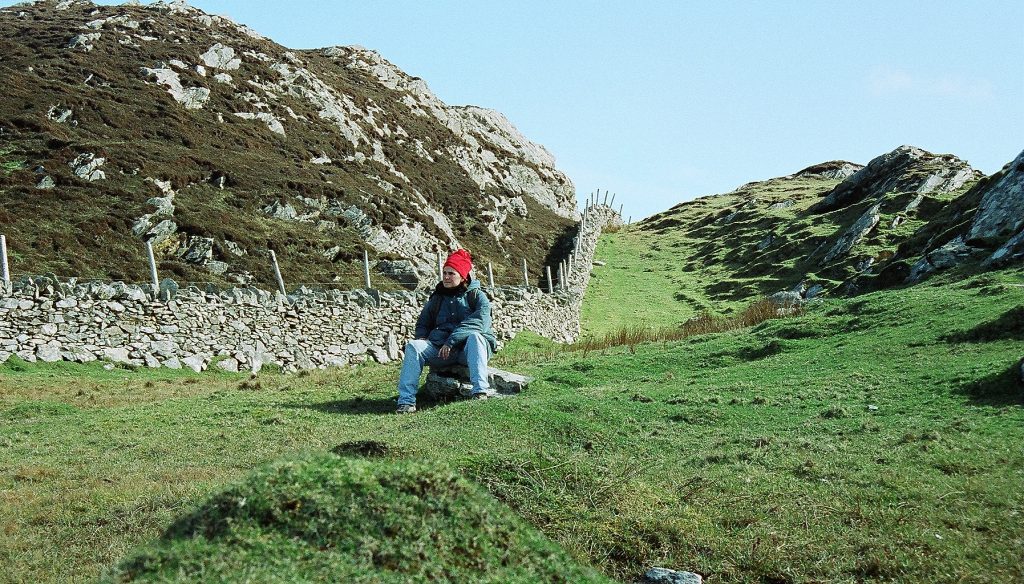 In the bible, there is a lot of focus today on the description of gender roles that often seems to be counter-culture: Husband as head of household and Wife as submissive to him. A better focal point for husbands, I think, is Ephesians 5:28–30: “Even so husbands should love their wives as their own bodies. He who loves his wife loves himself. For no man ever hates his own flesh but nourishes and cherishes it.”

In other words, how I treat Nora is how I treat myself, since we are one. Sobering stuff when I think back to how I was so self-focused on that day on Inishbofin.

Picking up near the end of verse 29, Paul says the husband nourishes and cherishes his wife, “… as Christ does the church, because we are members of his body.”

Christ submitted himself to the church in a way that cost him his life. I would never have the capacity to be so sacrificial, but I could try harder.

Back at the island dock, we had the option to take the supply boat back or pay to take a rival company’s ferry. No discussion or eye contact even; I whipped out my credit card. Modest transportation still, but it felt like a luxury ocean liner.