You are here: Home / Kids & Finance / 8 Lessons from Two Sweaty Years of Being a Badminton Dad 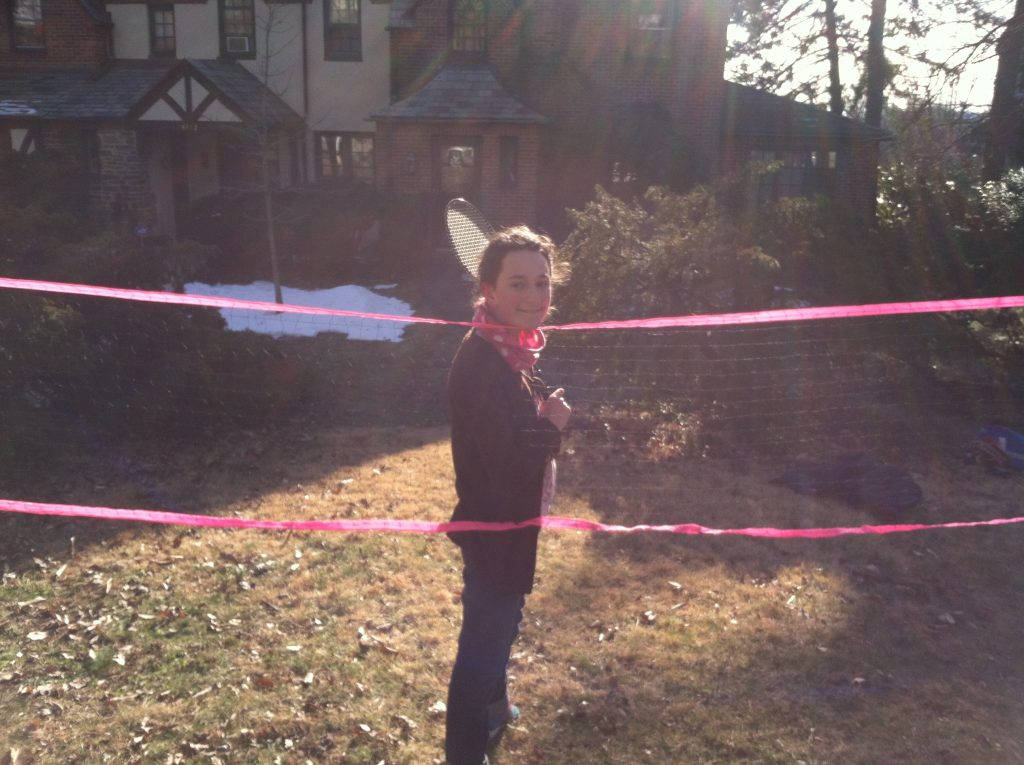 I tell people I’m the Richard Williams of the badminton world, with a few little 🙂 differences:

In the Baltimore private/parochial school world, the badminton championships concluded a week ago today. This season-ending tournament is played between six schools in Pippa’s school’s conference. There are two first-place trophies awarded: Singles and Doubles. Each team enters up to 3 singles competitors and 4 doubles teams.

As with most things in my life, I’ve learned a lot from badminton. So scratch the coach thing, and cram me into one of those little student desks instead.

Here’s what I’ve learned from 2 years of being a Badminton Dad, along with wider applications:

1. Sometimes you need to push your kids a little

I know this because I received a major shove when I entered high school. My mom secretly signed me up for fall cross country without asking me. At first, I was pissed – I gotta run how far? – then resigned, then having fun, then grateful. Sometimes mom does know best. (Just don’t ask me about the secret dog obedience school present I received one year during my teen years – gone was the joy and innocence of Christmas gift opening after that!)

A generation later, I didn’t want to risk the blowback from a clandestine sport registration, so we took the soft approach with Pippa – visiting the badminton table at the high school Open House, setting up a cheap-o net in the yard, and talking regularly about the possibility of playing on a team.

Wider application: Pippa and I (and Nora and Grey) have derived so much joy from badminton, but that would be lost if Pippa never got started. You need to get started. The best time to start planting trees/reading your bible/investing? Five years ago. The second best time? Today.

2. Nothing worth having comes quick or easy

On day 1, Pippa sucked. She couldn’t connect birdie and racquet and I wondered what we were getting into. Would it be like my ice hockey adventure in my 20s, where I never felt comfortable and was always the worst player on the team? Here is one of Pippa’s first matches in her freshman year, where she is so weak that she only utilizes the front third of her opponent’s court:

Wider application: You have to endure the lean years to enjoy – and fully appreciate – the fat ones. I think I had about 8 readers the first month of this blog, and 5 were related to me. Eight months later, I’m receiving daily emails and comments and twitter likes and retweets. Don’t give up – you could be on the verge of great success.

When it became clear that badminton was going to stick, we played in the yard – a lot. The ‘court’ got so much use that it turned into a mud pit. Nora got annoyed, claiming we were tracking dirt into the house.

It was worth it, I told her during Spring Break. “Remember that girl from Bel Air that Pippa lost to earlier this year? I bet she’s sitting on her butt all break, and Pippa will beat her next time.” And the second time they met (you play everyone twice, home and away), that happened. I was trying to be dramatic – I didn’t expect to actually be right!

Wider application: In the book “Outliers,” Malcolm Gladwell posits that it takes 10,000 hours to become an expert at something. Give or take a few thousand hours, that sounds about right.

4. You have to make an investment

I told you already about our investment in time and energy. It didn’t stop there. I cut down a tree(!) to make room for a regulation-size court. I installed boundary lines. We mulched over the mud. Then we made an investment in professional Yonex racquets – not the flimsy ones you get at Dick’s.

Wider application: As I covered previously, even super frugal people make strategic investments of time and money because we think they will pay off in the long run. Personally, I can’t think of a better or safer investment than me and my family.

5. Size and power are overrated

You look at Serena Williams and you think, “That woman is going to tear the cover off a tennis ball.” And she does. Power trumps all in tennis.

In baseball, the home run hitters – like the Orioles’ Mark Trumbo – often get big contracts, but they never enter the ‘Greatest’ conversation unless they demonstrate proficiency in all five tools (hitting for power & average, baserunning, fielding, and throwing). In golf, the cliche is ‘Drive for show, putt for dough.’

Similarly, power is just one element of badminton.

Granted, you can’t be the best in the conference without a power game, as demonstrated by Pippa here:

But mobility and pinpoint accuracy is just as important, as she shows here:

Wider application: You can’t tell how good a badminton player is by looking at her – they come in all shapes and sizes. So it goes with life. Competing with someone for a job, or a contract? Don’t underestimate them based on what they look like. And don’t overestimate your own prospects based on excellence in a single area. Advanced well-roundedness usually wins the day.

6. A little cockiness is a good thing

In her natural habitat, Pippa is a creature of love and empathy. This season, when one of her overwhelmed opponents started to cry, Pippa felt terrible. “In my head, I apologized before every serve,” she told me.

From the perspective of demonstrating Christian love, she’s right on target. But from a badminton perspective, it’s a competitive killer.

How do you stoke the competitive fires without causing an out-of-control conflagration?

It started with simple, (mostly) harmless trash-talking on the home court. I’d dish it out, and she’d get really good at slinging it right back. Eventually, she developed a ‘raging armadillo’ persona (don’t ask) for when she really needed to turn it up a notch. Check out her cocky shoulder shrug at the end of this point:

In matches, it has meant that Pippa is a lot better at closing out opponents. Before, she would get ahead, then feel bad and let her right back into it. Now, not so much.

Wider application: Practice Christian love and charity at the soup kitchen and homeless shelter, not on the badminton court or at the school debate lectern. And keep the inflated head and cockiness to a minimum – no one likes a blowhard.

7. You have to maintain forward focus

During last week’s end-of-season tournament, Pippa had an unlucky draw. After winning her first round match, she was paired up against the #1 player in the conference – the girl who had won the previous year’s tournament and who hadn’t lost a match all year.

The match started as you might imagine – Pippa quickly fell behind by double digits. Then, something shifted, I’m not sure what, but it started with this point:

You can see in the video that she was down 11-3 at the start of that point, with game point at 21. Somehow, Pippa was able to rally in that first game, eventually beating her opponent 25-23 (must win by two). In a best of three games format, she lost the second game, but took the decisive game three. This despite a clever momentum-busting unofficial timeout from her opponent to redo her hair.

I asked Pippa later how she was able to not panic and come back from such a huge deficit in that first game. “I didn’t even think about the score,” she said. And I think that was the key – she was so forward focused that she didn’t have mental space for the dismal score.

Wider application: Be like Pippa and banish past deficits and losses from your brain. Take lessons from failures but don’t dwell on them. A nasty history of indebtedness or sin doesn’t have to rule your future.

8. High school sports with no respect or scholarship potential are worth doing

Badminton, like cross country in my day, gets no respect. The stands are mostly bare, the Baltimore Sun prints no match scores (despite pages devoted to prep lacrosse).

At Pippa’s school, basketball is king. They bested their main rival and gave everyone a day off of classes to celebrate!

Combine that with a complete lack of college athletic scholarships for badminton (back to that lack of audience again).

Wider application: High school sports are important, even the unsung ones, assuming they are kept in perspective. Nora is particularly good at applying that perspective:

Nora on Thursday night: “We should have pasta or some other high-carb food tonight.”
Pippa: “Don’t do anything special, it will just put more pressure on me to do well in my matches.”
Nora: “I’m not talking about badminton, I’m talking about for your AP U.S. History test tomorrow.”
Pippa: “Oh yeah…that.”

What has participating in sports – or supporting them – meant in your life?