You are here: Home / Saving Money / We Brake for Free Firewood and Other Frugal Heating Adventures

For men, they say that you marry a younger version of your mom. That may be true, but in one way, my wife Nora is very similar to my dad.

I told you before about how Dad is not afraid to lay down a 4-wheel skid (in the days before ABS anyway) if he sees really cheap gas. One other thing that will elicit the same reaction: firewood spotted by the side of the road.

I’m not talking about neat stacks of firewood in someone’s yard. As Mr. Rogers might say: “That’s called stealing, children.” No, I’m talking about the stray sticks at the edge of a woods, or perhaps yard waste logs that have been put out for the garbage man.

Faster than you could say “This is really embarrassing,” Dad would lurch to the side of the road, pop the trunk, jump out, and spirit the wood into the back of his land boat. If necessary, he’d deputize one of us kids to help.

Nora didn’t grow up in my family (obvi), but she is remarkably similar when it comes to firewood sightings. During the summer, she saw this sign by the side of a Baltimore road: 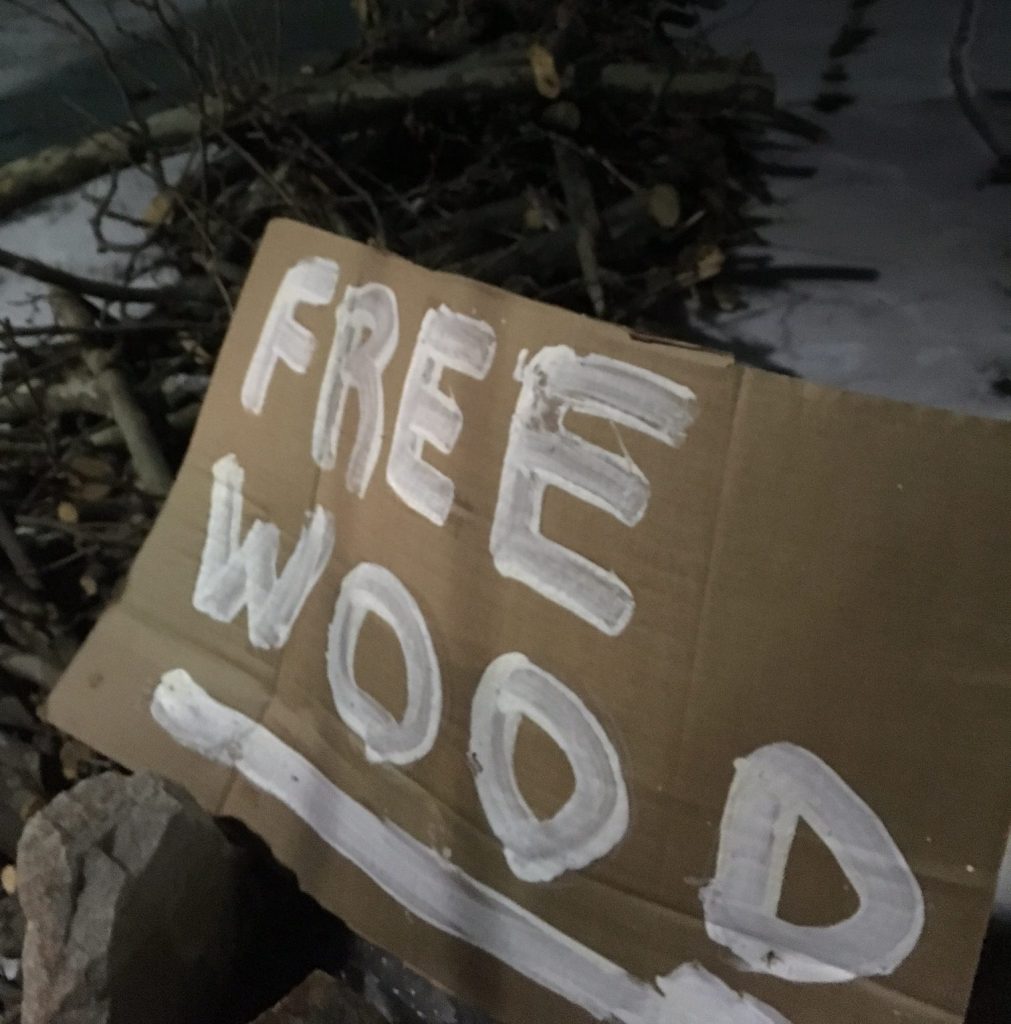 Nora slammed the brakes, causing my head to bobble like a stadium giveaway. “What the…?”

“It’s dark…and there’s no place to pull off the road,” I complained. “And it’s hot outside – how can you even think about firewood?”

She didn’t hear me, she already had the flashers on and the PT Cruiser hatch open (yes, the same PT Cruiser from this adventure), and was transferring small pieces into the back.

After taking a couple pics to document the insanity, I fell back into my childhood role and started to help. Thank goodness we have a relatively small car, I tell myself, as I mindlessly stack.

That wasn’t a one-time deal. A month later I came home to a pile of tree limb carcasses that Nora had recruited Grey to carry/drag home with her:

It’s not like we rely on our fireplace to heat the house. We generally only have about a dozen fires a winter. When we do, it’s partially because it’s frigid and we want to regain feeling in our extremities (without, you know, boosting the thermostat), but just as much about:

My brother Grant, on the other hand, is a legit firewood user. He lives in the country in Harford County on a 9-acre wooded property, and primarily heats his home with a wood stove.

Eight years ago he purchased a Vermont Castings Encore Wood Burning Stove with a catalytic converter for reduced pollution.

It cost about $2,500 for the stove plus $600 to re-line his existing chimney with stainless pipe.

Grant always has a handful of dying trees on his property, so he doesn’t have any firewood purchasing expense, although he does sink a load of time into cutting and hauling firewood.

In terms of ‘global commons’ expense (environmental degradation borne by everyone), wood burning is essentially carbon neutral. Wood releases the same amount of carbon into the environment whether it’s burned or if it rots slowly; the process is just accelerated.

Grant estimates he spends 30 hours per year spread out over six months to cut down trees, cut up and split logs, and transport and stack wood outside the house. Each year, he consumes about 3-4 cords of wood.

During the burning season, he spends about 15 minutes per day to maintain the fire and stove. Figuring four months of winter weather, that’s 15 minutes X 119 days = 29.75 hours.

It’s been a while since he started using the stove, but Grant estimates he saves $1,000-1,500 per year in electric bills. (His other home heating is a heat pump.)

Not bad, considering the side benefits.

Talking to Grant, he gets more excited about these non-monetary benefits that he listed for me:

As an occasional visitor, I can vouch for that last one. Yet another reason to do as mom always said: Dress in layers.