You are here: Home / Misc Finance / How My Brother Gained & Lost a Small Fortune in a Weekend 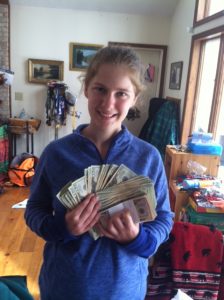 My brother Grant was driving his son to soccer practice when he saw a beige canvas bag in the middle of the road. It looked like a large plain purse or a small overnight bag.

It was a country road so he did a quick 180, no problem, and doubled back. Car still running, door hanging open, he darted out, grabbed the bag, and was back in the car and on the way to soccer in just a few seconds.

It was a few more minutes until he stopped at a red light and had a minute to zip the bag open. What he saw made his breath catch and his pulse quicken – it was filled with neatly stacked and bundled $10, $20, and $50 bills.

Not wanting to alarm or distract his 6-year-old, Hunter, Grant played it cool and dropped him off like normal, than raced back home. Despite a real effort to think about other things, his mind (and eyes) always darted back to the bag and the wads of cash inside.

At home, he raked the money out onto his kitchen table and counted it – exactly $4,000!

What’s the first thing you do after you find a bag full of $4,000? That is, after pretending you are in a rap video by throwing the cash in the air and having it rain down around you? You call your mother, of course.

“Mom, guess what I found in the road?”

Nine times out of 10 the right answer would be an animal, since Grant is an amateur wild animal expert. Playing the odds and always game, she replies, “A rare Northern Saw-Whet Owl?”

“Mom, everyone knows they are mostly found in Garrett County. And they are nocturnal.” It was the first time his mind drifted off the money for more than a couple seconds. But it didn’t last. “No, 4,000 cold, hard buckeroos!”

I remember the call well. “Barn, guess what?”

I hate wide open greetings like that. I know it’s a generic way to start a conversation, but I feel the need to come up with something. “You’re calling to tell me you wired me the $10 you owe me?”

“What? No…dude, you’re ruining this.”

“Whatever. No, I found 4,000…[I hear a shuffling in the background]…Georges. Does anyone say that?”

Nora was in the same room with me and I quickly filled her in. A gaping hole where her lips normally are, then this: “This is the moment in the movie where the bad guys show up with guns and a bad attitude,” she says. Nora is a major cinephile.

I summarized our conversation for Grant: “We think it’s a test. Nora thinks it’s a test of your physical prowess – your ability to fend off Harley-riding, sawed-off-shotgun-toting, double-crossing miscreants. I think it’s more elemental – do you use the money for good or evil?”

“Do you have to be so lame and over-dramatic?” said Grant as he hung up.

Then we didn’t hear anything more, and I forgot about it until we went a week later to Grant and his wife Krista’s house for a cookout.

“Grant, what ever happened to your windfall? A Bentley? Private island in the Caribbean? Early retirement? What?”

“No, it turns out I had to quit my One-Percenter Club membership,” Grant said with a straight face. “When I was fondling the cash for the fifteenth time, a Bank of America deposit slip fell out. So I swung by the bank and made the deposit.”

“It was a lot harder to do than you’d think,” Grant continued. “The bank was all suspicious and they had to call the manager out, but they took it eventually.”

“I also looked up the business named on the deposit slip and called them, so they wouldn’t stress out. They didn’t say, but I’m guessing one of their managers left the money bag on the roof of the car and forgot about it. All I know is I could barely hear in the background ‘Thank you, Jesus’ repeated over and over and over again.”

“You know, I’ll never forget that. And frankly, I hear that Bentleys are a pain in the ass to maintain anyway.”