You are here: Home / Faith & Finance / My Cousin Cole and His Fling with Prosperity Theology 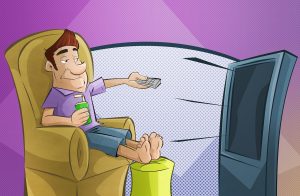 I stopped by Cole’s house on my way home from work. Cole’s my cousin and he lives nearby, so I pop in occasionally.

I never tell him I’m coming, I just show up. Some people might be annoyed by the invasion of privacy or the unpredictability of it, but not Cole – he always seems happy to see me. Or maybe he’s just happy to be seen.

Cole has the TV on like normal, but he seems to actually be watching it. “Hey Barnaby, you ever watch this guy?”

I’m sure I haven’t because I don’t ever seem to watch what Cole watches. He likes reality-style shows, but not the silly relationship-based ones. The ones with adventure or competition. (Yes, I know Bachelor is a competition, but relationship drama outweighs the game. I’m also hoping he’s turned off by the groom-to-be groping and french kissing multiple women in a day’s time, but I’m not sure about that one.)

The Amazing Race. Bear Grylls. Naked and Afraid. Wipeout before it went off the air. And the reincarnation of Wipeout for serious athletes: American Ninja Warrior. I’m not too proud to admit that I’ve been known to sit with him until the bitter end of each of these programs at least once. For research for this blog, of course.

Anyway, this was a talking head, but not a news anchor or infomercial peddler. It was Creflo Dollar. I’d never heard of him, but it soon became clear he was a televangelist.

I’m a suspicious person in general, but my suspicion meter red lines it when I see a televangelist. I know how TV works – you have to be entertaining or compelling enough to attract a mass audience. Subjects like helping the poor and God’s judgment haven’t tended to attract big crowds since Jesus walked the earth. And, let’s face it, Jesus’ big-crowd ability was partly due to his healing superpower. The cool glow that enveloped his body probably didn’t hurt. I’d opt for that over a cape any day.

On top of my foundational suspicion, pile on an obvious stage name like Creflo Dollar. With a name like that, this guy must preach prosperity theology, I’m thinking. The popular belief that with enough faith, you will be blessed with health and material riches. It’s an attractive message that’s been pushed by many prominent and wildly-successful preachers like Oral Roberts and Joel Osteen.

On the surface of it, it’s a message that is well-grounded in scripture:

John 14:14 — “You may ask me for anything in my name, and I will do it.”
James 4:2 — “You do not have because you do not ask God.”
Malachi 3:10 — “Bring the whole tithe into the storehouse . . . and see if I will not throw open the floodgates of heaven and pour out so much blessing that there will not be room enough to store it.”
Mark 10:29-30 — “No one who has left home or brothers or sisters or mother or father or children or fields for me and the gospel will fail to receive a hundred times as much in this present age.”

But is the bible talking about material or spiritual riches?

Cole muted the TV, wanting to say something. He never mutes the TV (even when we eat), so I knew this must be important. I locked eyes with him, though that probably didn’t help. He looked a little less sure of himself, but he launched into it anyway: “Last week I had a performance review, and I prayed really hard the night before for a raise. God knows I haven’t had a raise – even an inflation-offsetting raise – for 3 years!”

“You know what? I got it, and it was a good one.” I did a “Yessss,” we fist bumped and I headed home. I was really happy for him, but I didn’t know what to think about his sudden religion regarding Creflo Dollar and his prosperity gospel.

When I got home, I Wikipediaed Creflo Dollar. I was wrong – his real birth name is Creflo Dollar! I seemed to be right about the rest though. He owns two Rolls-Royces, a private Gulfstream jet, and multiple million-dollar homes. Creflo Dollar Ministries received a grade of “F” (failing) for financial transparency by the organization Ministry Watch.

The next week, I stopped in to see Cole again on my way home from work. Cole is pretty even-keeled, but something seemed a little off about him on this day. He barely acknowledged my coming in.

We sat in silence for 20 minutes watching a fishing show. Without looking my way or muting the TV, Cole said under his breath, “This week, they’re charging me more for my health insurance.” It was said matter-of-factly, but it must have been a real deflation after being so pumped up the week before.

Eventually, I got up to go. “I’m not sure that God wants me to be rich, or even comfortable,” Cole said, as a sort of sendoff. “Remember where the apostle Paul said to welcome suffering? But man, that’s some hard $#!+.”

On my way home, I thought about Cole’s mom, a woman of deep faith, who never had a spare dollar and was forced to endure a long, devastating and ultimately failing fight with ovarian cancer. I’m sure her faith could have been even stronger – whose can’t? – but would that have changed her poverty and sickness? Then I was confronted with the thought that maybe her faith was so strong because of her condition.

At home I looked up Paul’s letter to the Romans:

“Not only so, but we also rejoice in our sufferings, because we know that suffering produces perseverance; perseverance, character; and character, hope. And hope does not disappoint us, because God has poured out His love into our hearts by the Holy Spirit, whom He has given us.” (Romans 5:3-5)

The promise is great, but Cole was right – that can be some tough stuff.