This is my 2nd go at a Vignette post (read the Summer Vignettes here), I hope you find it entertaining or helpful. Let me know what you think.

I Don’t Recommend Hanging It on Your Exterior Door

It’s almost that time of year. Time to celebrate the birth of Jesus. Time for eggnog and Christmas music and office parties. And gift giving. The infernal gift giving.

I did a post last Christmas on What people really want to receive for Christmas. I was stoked to see that someone else thought it was a good idea. Check out this Money Wreath created by one of Personal Finance King’s youngest readers: 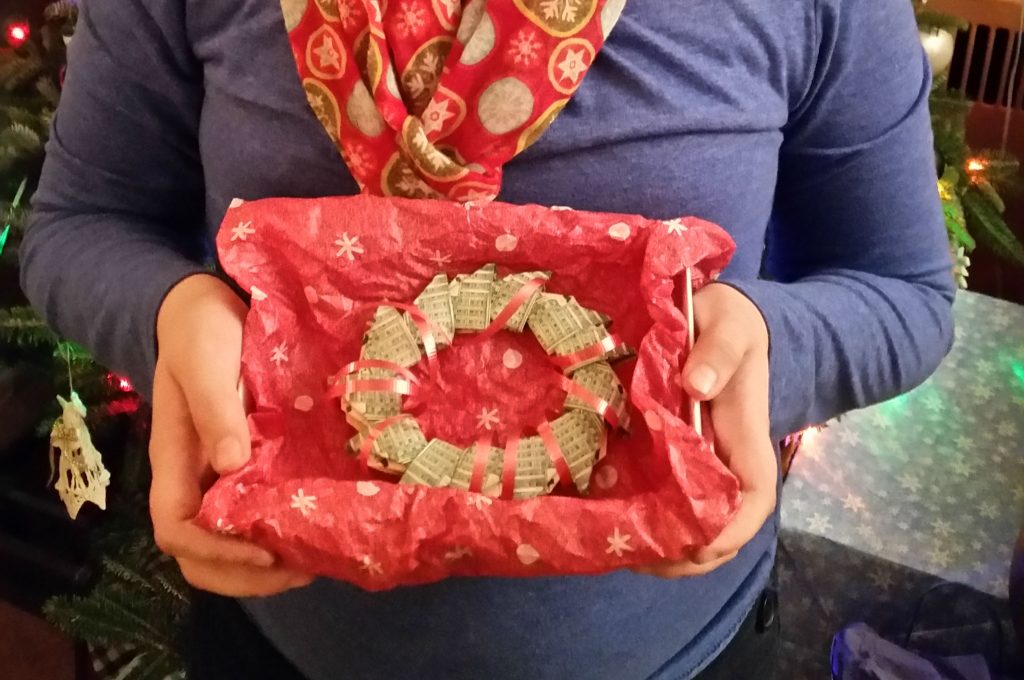 I Think I Prefer the ATM, Thanks

Growing up, mom did all the laundry. She had a rule that anything we left in the pockets of dirty clothes was hers. There were no exceptions, and I remember ‘donating’ some of my hard-earned summer cash to her on a few occasions.

I’ve got kids now, so I thought they could develop some healthy personal responsibility by adhering to this same rule. As the official wash starter (Grey generally folds), I had dreams of collecting a couple paydays before they learned their lesson.

But it didn’t work that way. There was a lot of pocketed items that came through the wash, but it was candy wrappers and used tissues (ewww!) and not-very-juicy scribbled notes from friends. I definitely wasn’t going to retire early on this!

Then one day, I reminded Grey that he owed me $20 for buying him some online game. “No problem, I’ll just put it in my pants pocket in the hamper,” he says. I’d say he’d definitely learned and remembered the connection between money left in soiled clothes, and it riding forevermore in my wallet.

Of course, that $20 never came through the wash, so I had to go extract it the old-fashioned way after all. I think we’ll go straight for that route the next time.

I’m Not Normally This Rude!

Our PT Cruiser (this one) has a broken horn. It works, but it doesn’t stop working for a long time, until it feels like it. Which is possibly worse than not working at all. Especially when you forget about it, and nearly trigger a major road rage incident.

It’s amazing how a blaring that emanates from a car behind you can trigger such emotions! Said the man who innocently thrusts both hands in the air while his horn honks away.

I’ve heard it said that after breaks and steering, your horn is the most important accident-avoidance tool. Sometimes all it takes is a quick tap on the horn to grab someone’s attention and avoid a collision.

When a short tap turns into an interminably-long blast, you start to think seriously about getting it fixed. If it were a horn defect, I could replace it no problem. It’s probably not, so it will need to have a mechanic look at it. I hate to interrupt a workday or a perfectly-good Saturday to take it to the shop though, unless there is something else wrong with the car.

So it waits, and bleats on and on. Less so now though, since the accumulated scar tissue of so many embarrassments has elevated the problem into a very prominent position in my brain.

After many years of limping along with a failing boiler (read about it here), we finally caved last year and bought an expensive new one.

I’ve been gratified to see our utility bill run 26% cheaper this year: 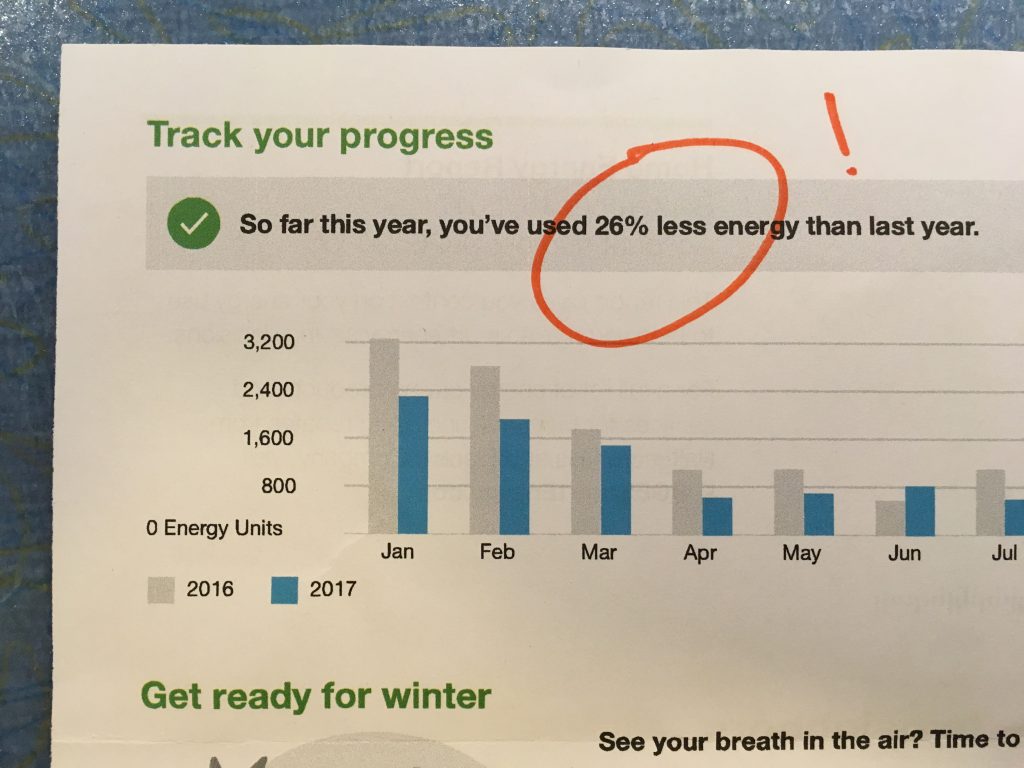 I took the ‘way to go’ letter from the utility and put it on Nora’s desk so we could share in the good news.

But 16-year-old Pippa found it first, and weaponized it like a seasoned political operative: “I see we’re saving money by keeping the house really cold,” she said recently. “I had to knock an icicle off my nose the other day.”

“Pippa, you know we take pride in not turning on the heat until after November 1 every year, nothing has changed,” I respond. “Besides, it’s been an unseasonably warm fall until just recently.”

We talked for a while about energy efficiency and BTUs and stewardship, but no matter what I said, Pippa couldn’t separate how she felt (cold) from the energy saving letter she’d stumbled upon.

Tired of patient reasoning, I resorted to yelling “That’s fake news!” but I don’t think that helped one bit.

Is That Blush or Is Your Face Naturally Red?

A while back, old friends of ours visited from Virginia. The wife sells Mary Kay cosmetics. She’s very outgoing and personable, so she has done very well with it.

I notice when we greet her at the curb that she has one of those (subtle) pink Mary Kay cars with a big marketing message splashed across the back window. Always a student of business and marketing, I inquire: “Do you get many calls from strangers that see your phone number in the window?” 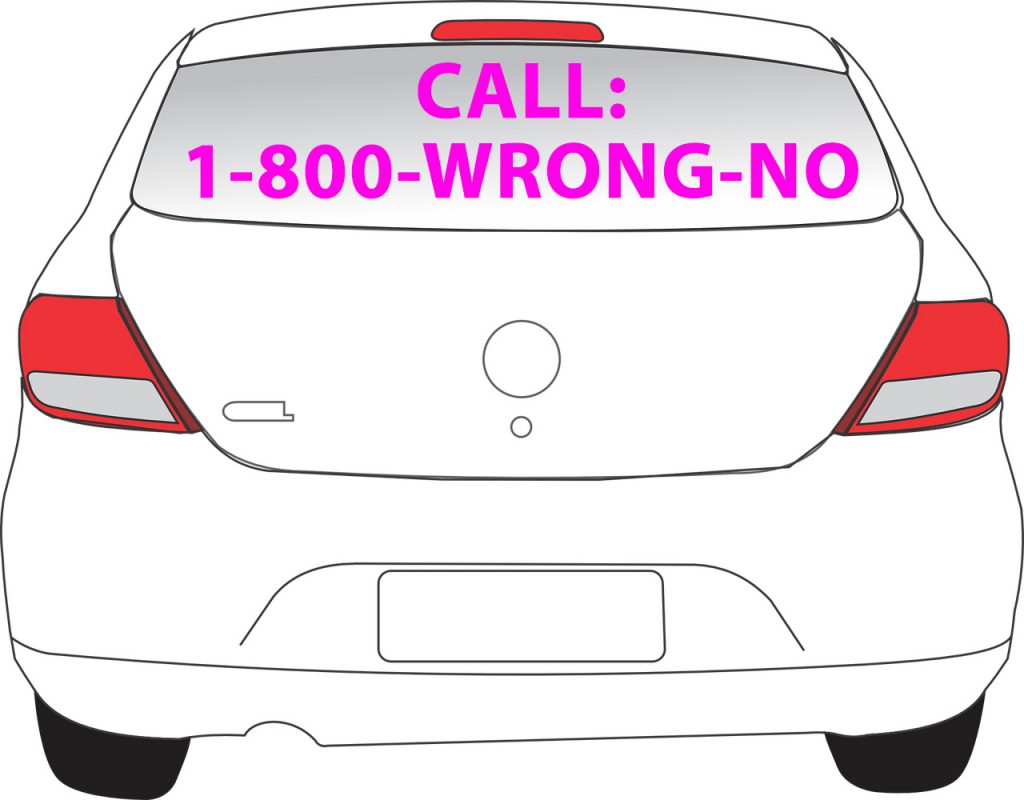 We all burst into laughter together.

We are a board-game-playing family. Mastermind is a favorite.

A favorite of everyone but me, that is. I tolerate it, but the logic of Mastermind doesn’t came as naturally to me as it does to Nora, Pippa, and Grey. As the guesser, I can usually determine the right color combination of the hidden pegs, but it’s painful and time-consuming. So I normally ask to be the peg hider, not the guesser. 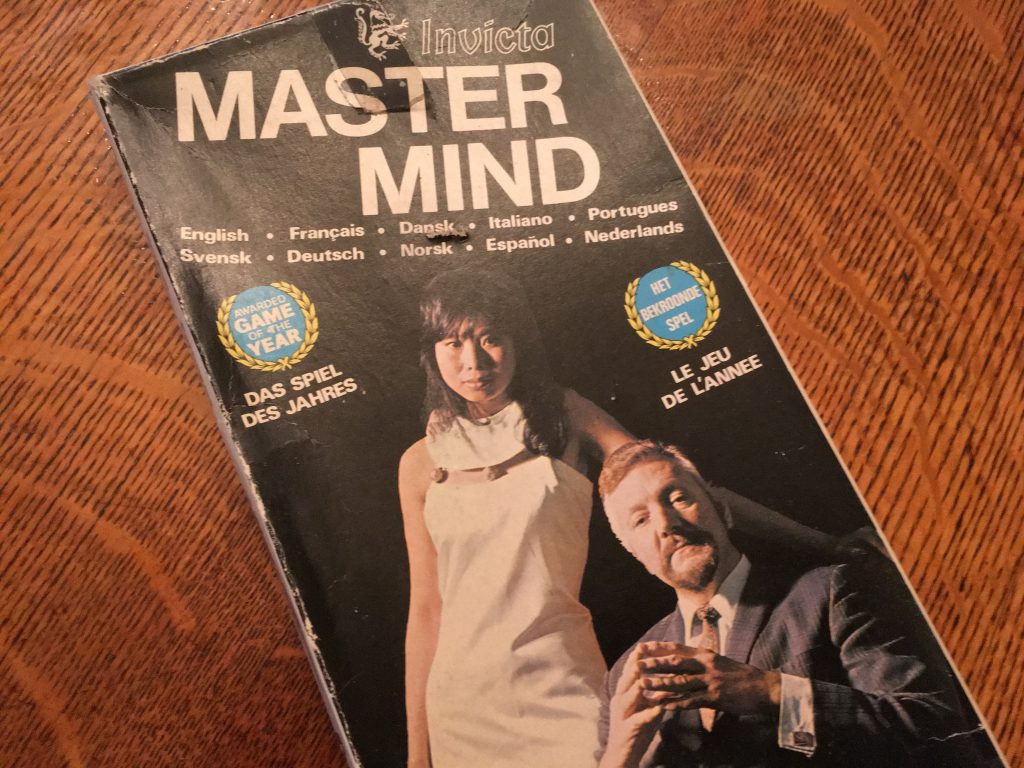 A bored Pippa the other day to me: “You want to play Mastermind?” I stay quiet. “I can guess.”

I retrieve the beat-up Mastermind box, open the lid, and … “What the … Pippa, this looks like a check from your part-time job working with your grandfather.”

“Oh, that’s where that went,” she said, slipping it nonchalantly out of my hand into her pocket.

“I don’t know,” she says, and I get the impression that’s not a throwaway comment. “Are you ready for me to guess, or what?”

I’m Sorry, But You Must Extend Your Pinkie While Drinking Your Chocolate Milk

Nora works in a school. When she comes home, my job is to patiently listen to tales of striving students, misguided parents, and zany colleagues. Nora is a good storyteller and I’m a pretty good listener.

School stories generally trace a familiar arc, but I started to notice a subtle change in September – a new term that I hadn’t heard before: ‘Dean of Etiquette.’

Finally, my curiosity overcame my reluctance to interrupt. I contorted my face into my best quizzical look, which gave me just enough of an opening to insert: “What in the world is a Dean of Etiquette? Are your kids being prepped for the Cotillion? Is this a new position?”

Nora snorted. “A new position after all the budget cuts? No, they just renamed the ‘Dean of Discipline.'”

Nora continued right on as if I never interrupted.

I half listen while also contemplating why there’s sometimes more of a focus on feel-good superficial semantics than on harder and more-fundamental improvements. A title change is a small thing, but maybe it’s not.

No, I Won’t Try Out for Varsity

We have friends with a son who plays high school soccer. A couple months ago, I asked him how it’s going.

“Yesss—!” I replied, but I stopped mid-sss. It was obvious my enthusiasm was way outpacing his. “Isn’t that a good thing?”

“Kinda,” he admits, “But it’s not as much fun. I don’t get to play as much, and when I do, I can’t do any fancy footwork or anything. It’s much more serious.”

I can relate. When I started this blog I had a choice: Have fun and write about what I want to, or take on advertisers and the responsibility of driving lots of traffic by writing about things that don’t interest me, then spend mindless hours promoting each post online.

This is my second year blogging and I’m still on the JV Blog Team. And that’s a good thing.