You are here: Home / Travel & Finance / Guided or Self-Guided? Our ‘Deluxe’ Vacation to Alaska 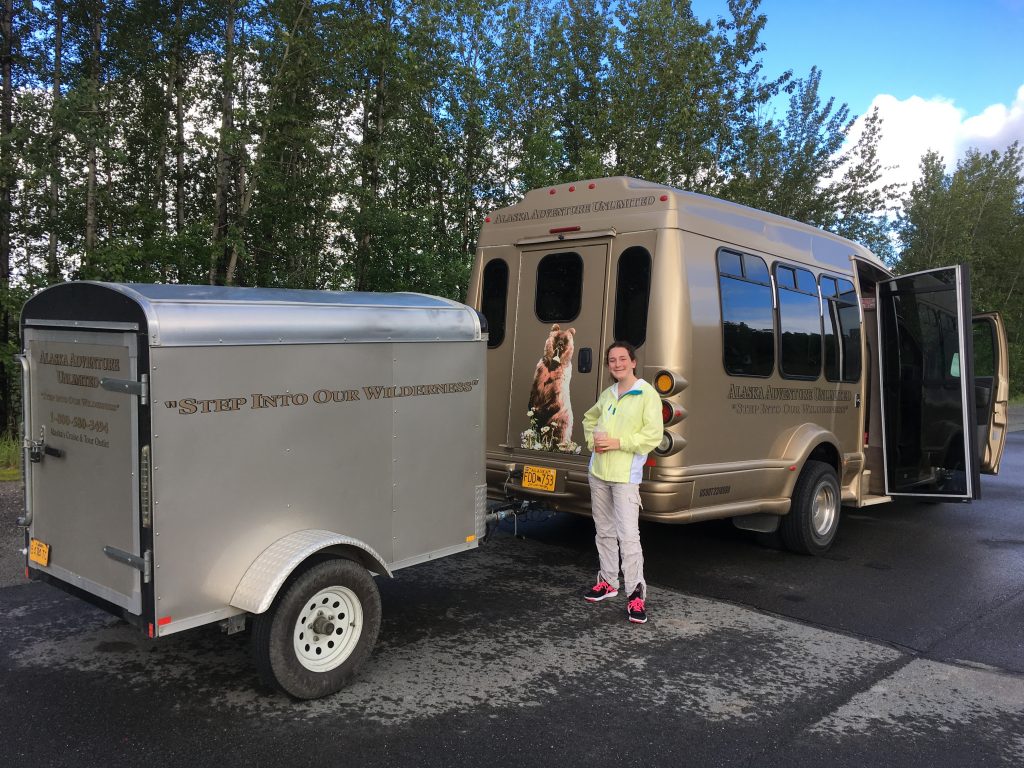 Until this month, we had never been on a guided vacation.

We couldn’t afford it, for one. But more than that, we always took pride in creating our own itinerary and being flexible and changing it up when something interesting came along.

But then something amazing happened. Nora’s mother said she would sponsor us to go with her to Alaska! She had always wanted to go to Alaska, and she couldn’t imagine experiencing it without her favorite son-in-law. (I might have made that last bit up.)

This wasn’t just any vacation. This was the 10-day Grand Discovery Alaska, Deluxe Package, a fully-escorted land-based tour of Anchorage, Denali, and the Kenai Peninsula.

Fresh off this amazing trip, here are my thoughts on the relative merits of a guided vacation.

In the past, our self-guided trips have required a lot of pre-departure research and in-trip scrambling. Where are we going? How are we going to get there? Are we going to be able to do everything?

With our Alaska vacation, there was no research, no scrambling, no thinking.

For her birthday in July, in anticipation of the trip, I bought Nora an Alaska travel book. She never cracked the cover. There was no need for it.

There was one point during the trip where the group was loaded into the back of a big reconditioned military truck. “Where are we going?” I asked. “Do you really want to know?” replied the leader. “No!” everyone shouted in unison. There is something fun in being blindly led on surprising adventures.

This glacier is where we went and it was really cool, in more ways than one. 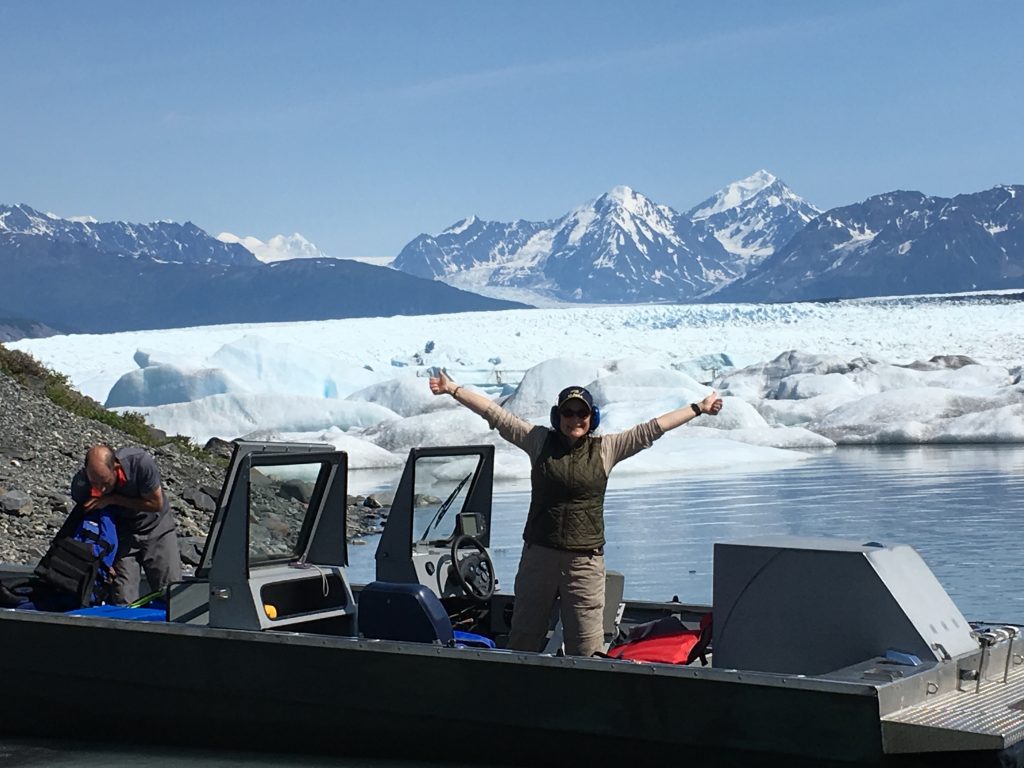 Every day was filled with one or two excursions or visits, and practically everything we did was a hit. Not too surprising since the tour operator lives in Alaska and specializes in offering the best experiences.

Our ‘flightseeing’ excursion in a 8-seater plane where we landed on a Denali glacier was one of the most spectacular things I’ve done in my life. I didn’t see it, but Grey confided in me later that at one point tears leaked out of Nora’s eyes as she contemplated the glory of God’s creation and our ability to witness it in that time and place.

Even the rainy day Plan B itineraries were engaging. When precipitation caused another glacier excursion to become too treacherous, the replacement Musk Ox Farm visit seemed just right. Who knew that musk oxes could be domesticated (sort of) and that their fur (qiviut) is softer than sheep’s wool and 8 times warmer?

Not everything was perfect, of course. A mining for gold exercise at a defunct goldmine comes to mind as overly fake and touristy, but those types of experiences were exceedingly rare.

Because everything is planned down to the minute on a guided tour, there isn’t much room for discovery, beyond the programmed variety.

When we vacationed with a friend in Wales many years ago, Nora and I had read about the rich tradition of men’s choral groups that had originated in the coal mines, and how they persisted to the present day. At the first visitor center, we inquired about seeing one of these groups perform. Nothing was planned, the woman reported…but perhaps we’d like to see a practice tonight at the local elementary school?

Sure, why not. When we arrived, we discovered that we were the only people to attend this practice, during which the men serenaded us with “When the Saints Go Marching In.” A moment of serendipity I’ll never forget and something that wouldn’t happen on a guided tour.

On the flip side, a guided tour doesn’t offer any surprise on the cost side either, which is a good thing. All expenses (except tips) are listed (and paid for) upfront. See Expense section below for a further discussion of finances.

When you plan and execute your own trip, there is a certain level of satisfaction and pride you feel in pulling it off, mistakes and all.

I was super stoked when we witnessed a pod of 7 killer whales (orcas) swimming and surfacing in unison during our day cruise in the bays of Kenai Fjords National Park.

The only thing that would have made it better? If we had researched it at home, chartered our own little boat, and found the whales on our own, for half the cost.

A smaller chance of success, I realize, but double the viewing satisfaction.

When we mounted the steps of the Anchorage-to-Seward ‘A’ train, I felt this creeping sense of superiority over the unwashed masses in the back of the train. I deserved the superior views in the observation car. Of course we’d have our own young pretty tour guide to point out wildlife and explain Alaskan history. And yes, the fawning bartender and open bar (two drinks worth anyway, which is pretty good for a morning trip) seemed about right for people of our caliber. 😉 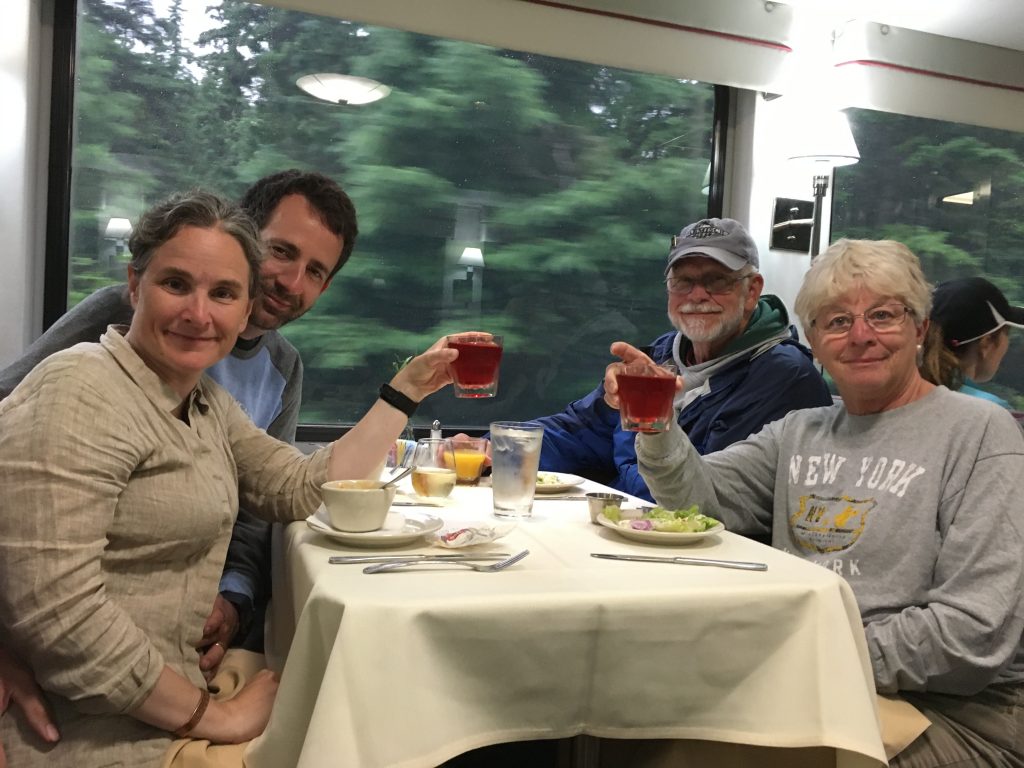 Not everyone is going to have these feelings of superiority – perhaps I was the only one in our group. Everyone has different weaknesses and sins. But in retrospect, I’m thankful I had the self-awareness to recognize this pernicious feeling, so that I could deliberately chart a mental course correction.

This was off the table for us (except for airfare and incidentals), but I have to address this elephant (grizzly bear?) in the room. These guided trips are expensive. We are talking just north of mid-four-figures. Then add in big additional fist-fulls of cash for tipping. (The tour leader alone asked for $10-15 per person per day, according to a sign prominently displayed at the front of the tour van.) And don’t forget the other drivers, pilots, waiters, and bellhops.

Now my MIL isn’t wealthy – she is actually one of the most deal- and coupon-focused people I know (come to think of it, perhaps that’s why she has resources). Rather, she is just very intent on investing in experiences with family as she enters the autumn of life. And I, for one, fully support this investment! 🙂

Our Alaska trip was one of the most memorable I have ever been on. I’m grateful for the opportunity to spend this extraordinary time with family, especially knowing we probably won’t ever do something so grand again.

And I like self-guided vacations too, for different reasons.

Have you taken an escorted trip? Was it worth it?