You are here: Home / Kids & Finance / What Happened When I Accepted a $25 Dare to Wear Superman PJs in Public 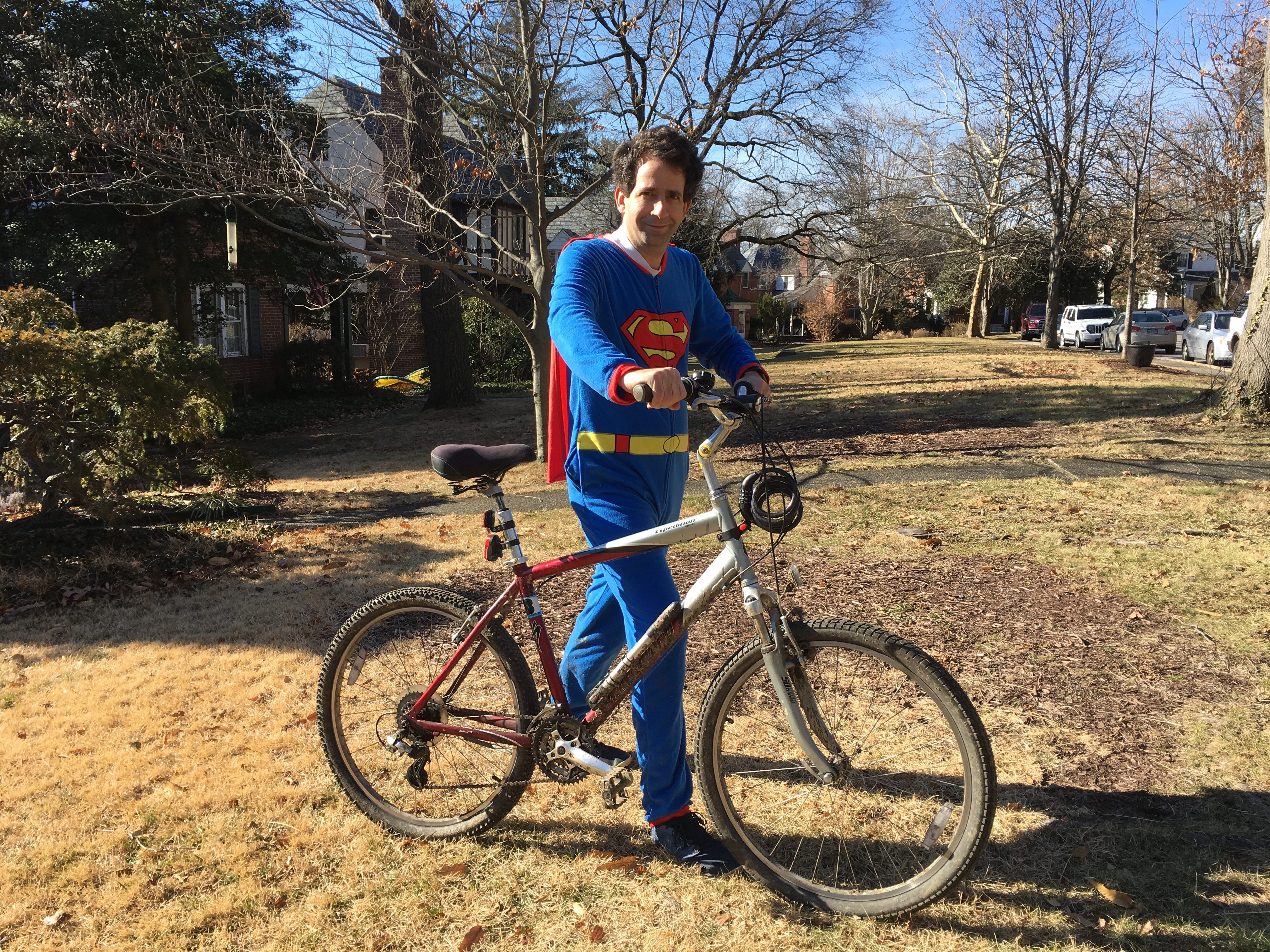 I like to bike. My wife Nora likes to thrift shop. Our son Grey likes to embarrass his parents.

Put all that together and you have the perfect formula for me to make a little pocket money. Got it? Stick with me.

Thrill of the Thrift

A couple months ago, Nora came home from Value Village with her normal gargantuan bag of treasures. You never know what’s going to be in there, but it’s usually a good mix of practical and outrageous. She gets something for everyone, and a lot of it ends up going back.

Well, this time she out-Nora-ed herself – she came home with a head-to-foot Superman pajama outfit, with accompanying cape.

First, props to Nora – it must be hard to find Superman pajamas in size large. I imagine the market of huge 3rd graders must be pretty limited.

Second, there is no way I’m wearing that thing. I’m a boxers and T-shirt kind of guy…

A month or so later, I set up a Saturday bike ride with Grey and his friend.

Out of nowhere, Grey challenged me: “Dad, if you wear the Superman PJs on the ride, I’ll give you $25.”

Grey, like most kids, doesn’t have a great record of paying off dares, so I collect the money up front. Then I don the suit. 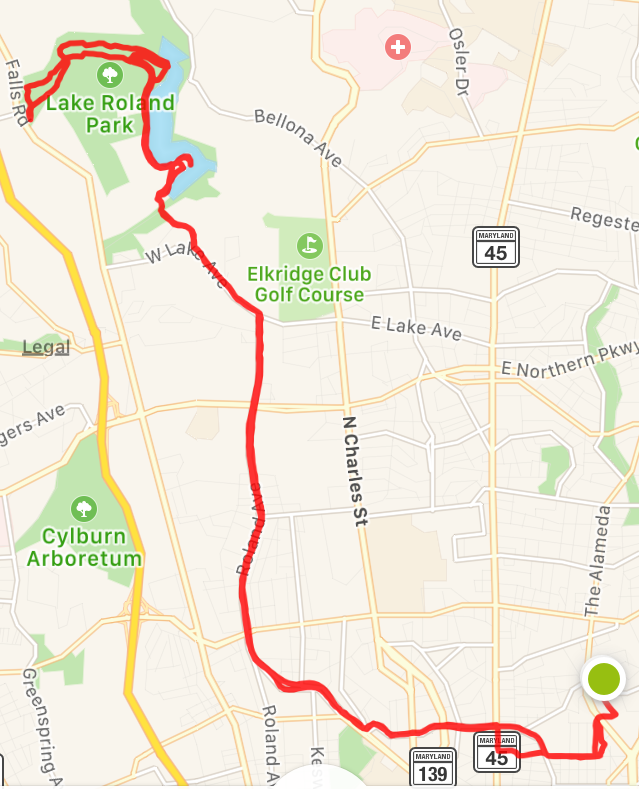 We bike to Lake Roland, just outside Baltimore city limits. It’s unseasonably warm, so lots of people are out, many with their dogs.

Amazingly, no one laughs and points. Just the opposite. Little kids stare with saucer eyes and open mouths. Teens laugh, but in joy, not derision. One mom yells “Hi Superman!”

It’s hard to fathom later, but suddenly I feel a responsibility to represent Superman well. Kids are watching how I act and what I say. I need to be a role model.

I try out some heroic lines, first meekly, then more confidently. I finally settle on “Off to the Rescue!” as my best, delivered with one fist thrust straight ahead over the handle bars.

On the way back, I get an unexpected thrill when a downhill section causes me to accelerate so much that my cape lifts up behind me.

Don’t get me wrong, I won’t don the Superman costume on my own for another cycling outing. But there was a certain something positive I felt in being an ambassador of joy and goodwill to perfect strangers.

It reminded me of when I used to peddle around Baltimore pulling a cart behind my bike, with a little Pippa and Grey loaded into it. I would get so many “All rights” and “You go” and “Where can I get one of those?”

Back home, I wondered if Grey had any buyer’s remorse. “You still glad you did it?”

“Yup!” he affirms. Grey and buyer’s remorse are strangers. He’s quick to spend and has no regrets.

I want him to have the $25 back but I know I can’t – it would ruin everything.

So I do the next best thing: “I’ll give you the $25 back if you donate it to charity. Our church, or an environmental group, or whatever.”

“Let’s wait,” he says. “I want to see what’s in the Samaritan’s Purse catalog at Christmas.”

We do Christmas Child boxes every year. You fill up a shoe box with toys and toiletries, pick a gender and age range, then Samaritan’s Purse inserts a Gospel message and ships it around the world to a needy kid.

It’s a good concept, because it gets kids involved, and it hopefully fills a bit of the material and spiritual needs of recipients.

I was pleased/not pleased that he had selected Samaritan’s Purse. Pleased in that it seems to be a great organization doing important work. And pleased that Grey recognized that, and wasn’t being self-centered in his charity selection.

The ‘not pleased’ factor is related to the leadership of the organization. Samaritan’s Purse CEO Franklin Graham likes to take controversial political positions, and is a heavy Donald Trump cheerleader and apologist. (Nevermind his bloated $622,000 CEO salary.)

I prefer my Christian leaders to be apolitical. Neither major party gets it all right, and democratically-elected politicians are not typically the most upright people.

Sins of the Father?

Franklin’s father Billy Graham was close with President Nixon, but said in 2011 that if he could go back in time, he would have stayed out of politics. Nixon will do that to you.

The 99-year-old evangelist was famous for his ecumenism, or emphasis on unity among churches.

His son Franklin, not so much. He is regularly denounced by other Christian leaders. And no doubt has driven people away from the faith who are disgusted by his divisiveness and hypocrisy.

He justifies his allegiance to Trump by excusing his transgressions as being “alleged” and in the distant past. And focusing on the rightness of his policies.

I don’t know. The alleged bit is a dodge, and I’m not even going to bring up the Access Hollywood tape as evidence otherwise (whoops). Trump has a long public history of cheating on his wives, and he’s on record (Howard Stern for what it’s worth) lamenting that his second wife wouldn’t abort Tiffany, who, for some reason, isn’t particularly close to her father.

I’d like to believe Trump has had a Come-to-Jesus awakening, but his words again belie that possibility. In 2015, Trump said he has never asked God for forgiveness. God works miracles and changes hearts, but from all appearances, it hasn’t happened yet.

Regarding policy, yeah he’s made some positive changes. I’m Pro-Life so I like that. But Trump doesn’t exactly welcome the stranger and alien, so it’s a mixed bag.

Where was I? Oh yeah, Grey’s charity selection. Well now he is waffling, so maybe the money will go someplace else. The money isn’t burning a hole in his pocket, so there isn’t any urgency on his part.

As for me, I’m just glad to be back in street clothes. It was fun for a few hours, but the responsibility weighs on you after a while.