You are here: Home / Kids & Finance / How We Helped Our Teenager Become Responsible for Her Own Tooth Brushing

My daughter Pippa dislikes brushing her teeth and avoids it when she can. Nothing too unusual for a teenager.

However, I recently realized I was enabling her failure to develop her own automatic nighttime brushing routine. I had gotten into the bad habit of reminding her every night that she had to brush. She was readily compliant, but she didn’t own it, so we’d repeat the same process night after night.

If I was out of town or distracted, the brushing often got skipped.

Since she is a junior in high school, we’ve recently been discussing the possibility of her going away to college. Suddenly I had a vision of her totally shutting down all dental care when she left the house.

I could picture it now. By Christmas, she would have a thick fuzzy layer of food and bacteria clinging to her teeth. By spring break, they’d be black and reeking. By summer, she’d suppress any urge to laugh, fearing we’d notice a couple teeth had rotted completely away.

And who would feel guilty about it? Me, that’s who. All because I’d babied her when she was sixteen.

What to Do? Carrot or Stick?

Experts say that to ensure maximum buy in, you should let your kid help determine the reward or punishment for an infraction. We’ve tried this, but it’s a disaster:

Me: “Pippa, what should your punishment be if you forget to brush your teeth?”
Pippa: “Umm, how about I have to stay in Friday night.”
Me: “Don’t you stay in most Friday nights?”

For some reason, the teenager-generated punishments were toothless (haha), and the rewards were fit for royalty.

Nora and I discussed other ideas:

Carrot Option #1: Brush your teeth every night without a reminder and receive a mini Snickers.
Verdict: Uhhh, I think we’re working at cross purposes here.

Carrot Option #2: Brush your teeth every night without a reminder and receive $1.
Verdict: Sounds like the bank (parents) are being punished with this one.

Stick Option #1: Miss a night of brushing your teeth and receive a spanking.
Verdict: We believe in spanking, despite the studies that say you are turning your child into a violent psychopath. But not at 16 years old.

Stick Option #2: Miss a night of brushing your teeth and give up the next episode of your favorite podcast.
Verdict: Strikes fear in the heart of the child (good), but practically impossible to monitor (bad).

Tailored to the Kid

Every teenager is different, so the carrot or the stick will vary from kid to kid. For Pippa, we knew that she responded well to the threat of financial loss.

Previously, when we had come home to an unlocked house two days in a row (when she was responsible for securing it), I blurted out: “If I come home again and the house isn’t locked, you’re giving me five dollars.” We live in Baltimore, after all, where an unlocked house is appreciated in the same way that foxes appreciate free-range chickens.

It was an impulsive threat, but it worked. Since then, whenever she has been the last one to leave the house, she’s never failed to lock it.

With that in mind, we developed a similar system for the bathroom, with a way to track compliance. Every evening I transfer the toothbrush from the holder to resting on top of a picture of me with a trophy fish from an old Outer Banks deep sea fishing adventure. 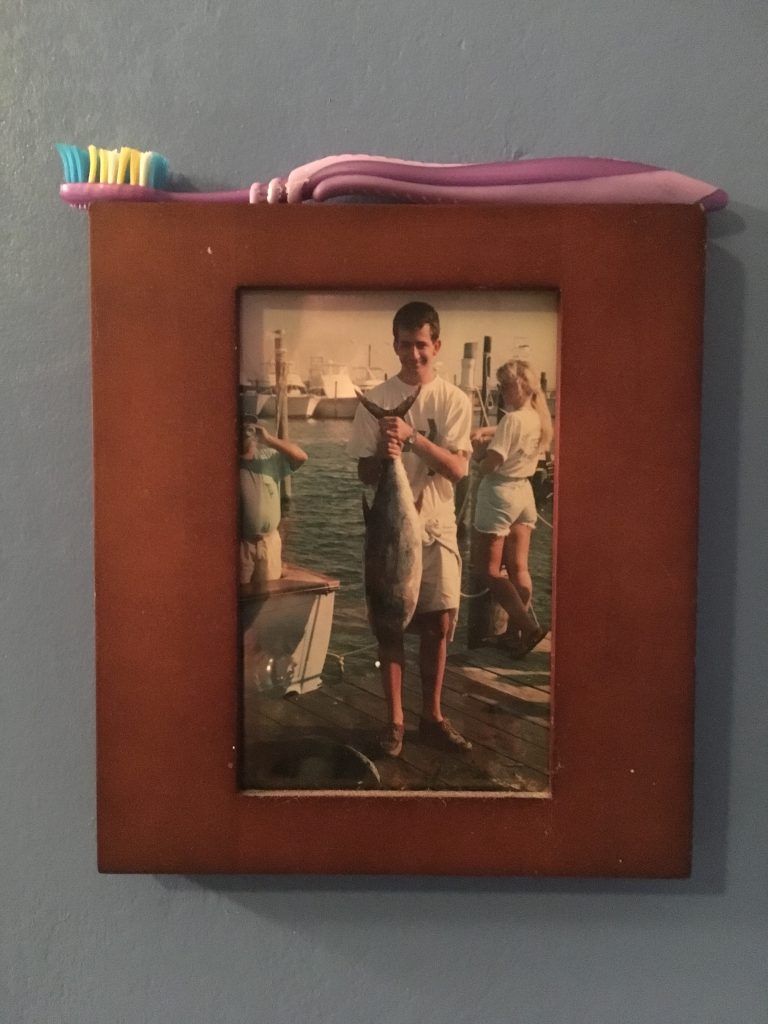 If the toothbrush is still there in the morning, Pippa owes me $2. If it’s in the holder, she owes me nothing. Three months later, she’s only missed once, and she has an excuse. A weak one, but let me explain.

Anytime we develop a new family discipline, the kids try to apply it family-wide. That makes sense for dining table rules, but Pippa used her full imagination when she proclaimed that I owed her $2 if I forgot to move the toothbrush to the photo frame in the evening.

I was like “What are you talking about?” but Nora didn’t reject the notion outright, which gave the proposal way more credence than it deserved.

It wasn’t long before I missed my part, and Pippa triumphantly announced that I owed her $2. Appropriately, I laughed it off.

A few days later, I woke to find the toothbrush still perched atop the picture frame. Immediately, I marched into Pippa’s bedroom to collect my $2.

“I’ll just forgive the two bucks you owe me – we’re even now,” she stated confidently.

“All right, missus, this one time you don’t have to pay me. But from now on, I’m on the collecting end, not the paying end. This is for you to develop a healthy routine, not for me to learn to remember to put your toothbrush in a weird place every night, OK?”

She hasn’t had a missed night since.

Now, the final step: My withdrawal, and subtle observation to make sure she doesn’t backslide. I think she’s got it now, but I want to be sure. After all, I feel partially responsible for her previous brushing failures.

Have kids? How have you helped them take responsibility for things?