You are here: Home / Work & Finance / I Completely Destroyed the Rear Window of My Car 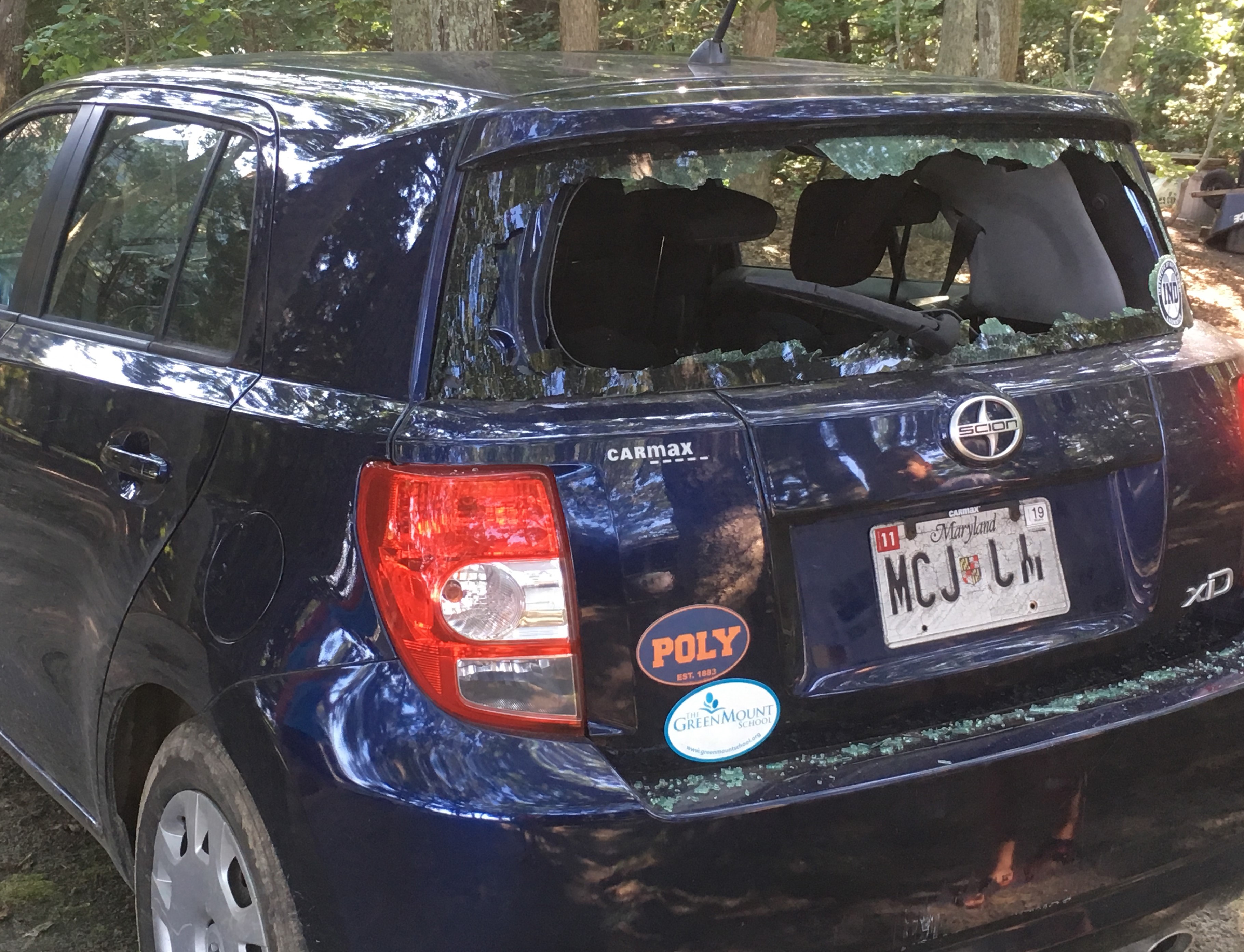 I’m the self-appointed ‘Best Driver I Know,’ so it came as a real shock to hear the rear window of my Scion xD violently implode as I was backing up recently. I mean totally disintegrate into a thousand tiny bits, one of which I later found had rocketed all the way to the front seat, resting in one of the dashboard instrument recesses.

I didn’t realize how close to a tree the hatchback-mounted bike rack was until I was way too well acquainted with it. The car itself never directly touched the tree but it didn’t have to.

Related: I ran out of gas twice in this car – on the same day

I wanted to take the Trump approach and blame someone or something else for the accident, but nothing seemed credible. The rack had been mounted to the car for a week. The tree was large and totally stationary. I just screwed up.

But I could still conveniently associate a bit. “NORA, I PULLED A MOM!” I yelled into the house. My mom had recently backed her PT Cruiser into my dad’s Grand Marquis. Coupling the acts made my transgression seem more ordinary and acceptable.

I’m sure Nora saw right through that, but she was totally gracious. “I’m sure it’s not bad…” Then, once I led her outside: “Oh. That’s quite a mess.”

This was on Long Island where family tends to congregate at the farm during the summer, so I felt sure my little accident would soon have a wider audience. Sure enough, my 9-year-old nephew Hunter came around and immediately started snapping pics. I was torn between wrestling the iPod Touch from his sweaty little hands, and letting him do his thing, pretending like I didn’t give a rat’s ass. The adult that I am, I went rat’s ass.

After he had captured every excruciating angle, he said: “You mind if I post this to Instagram?”

I’m thinking: “They let little squirts on there now?”
I say: “That doesn’t sound like a good idea.”

But it’s not a hard ‘No’ and I don’t say it while firmly squeezing a wrist and locking eyes, so I’m not sure how deeply it penetrated his skull. Not very deep apparently, because I receive a text a couple hours later from a cousin, wondering how I’m doing. “Only thing bruised is the ego,” I reply, sheepishly.

Nora suggests we tape up the window with garbage bags for the long ride home to Baltimore, but I assure her I’ve studied the coming weather – I had – and that it wasn’t necessary. Besides, I wasn’t thrilled about the idea of having to endure the deafening flapping along the full length of the Long Island Expressway, plus 185 miles of I-95.

I don’t know what a new window costs, but I know it won’t be cheap. There’s the window itself, removal of the remainder of the old window, then installation (including defrost hookup) of the new one.

And no, we don’t have insurance to cover these types of things. As I’ve covered before, you end up paying WAY more in premiums than you receive in payouts for that type of coverage. That’s actually true of practically all insurance, but when the potential for loss is gargantuan (six-figure lawsuits), then you willingly make a down payment on the risk avoidance that is car liability insurance. Besides, it’s sorta required by law.

I do a quick google search on my phone of window replacement companies in Annapolis where I work. There are a few, but only one – Superior Windshield Repair – that has 25+ glowing google reviews and a legit five-star rating. I don’t think I’ve ever seen a company with that many ratings earn five full stars. I dial them up, relate the particulars (make, model, year) and they say they’ll call back.

While I’m trying to determine who has the 2nd best rating, for a competing estimate, Superior calls me back. “It will be $432 and we can have it done for you tomorrow,” he says. The 2nd estimate idea instantly leaves my brain, like a formula during a math test.

After a quick detour to FDR’s home in Hyde Park (to admire my grandfather’s gravestone craftsmanship) and SplashDown Beach (we love water parks) in Fishkill, NY, we head for home.

Pretty quickly, the sky develops a plum complexion. It’s just a passing thunderstorm, I tell myself.

Yes, a storm that we passed directly through, followed by a second storm, and a third one. Normally I love driving in the rain, but when the back window is out and everything is getting soaked, you feel every…single…raindrop.

How easy it would have been to sloppily tape up that gaping hole! How is it that Nora is always right?

It’s dark by the time we get home to Baltimore, and I know it will still be dark when I leave for work in too few hours. I hit the bed hard, only stumbling to my feet on the alarm’s third go ’round.

I normally leave for work at 6:15 am to avoid traffic, but today I have to leave 15 minutes early for the car drop off. I fold down the back seat and jam Grey’s bike through the hatch. There’s not enough room in there for a full-size bike like mine. Wouldn’t it be nice if I had a bike rack? 😉

Halfway to the highway, breathing in the humid car air at a red light, I hear a short honk next to me. It’s Koby from the neighborhood.

“What happened?!?” He was agitated, but I attribute that to the general anxiety city residents feel when they see damage to a neighbor’s car. A scratch the full length of the car? Musta been keyed. A piece of cardboard taped in the window? Surely a teen bash and dash.

“I backed into a tree.” Koby’s whole countenance changed; he couldn’t have been happier to hear it. The light turned green and we sped off together.

Forty-five minutes later, I pulled up to the Superior garage. I was surprised to find the office illuminated and someone already working; I had expected to use the night key drop.

He came out to the car and watched me struggle to extricate Grey’s bike. Before long: “Let me drive you to work.”

With the drop off, I’m to work before I normally am. I’m starting to understand the awesome ratings.

Mid-afternoon, the shop owner calls to report the job complete, and without a word from me, that he’ll drop off the Scion at my work within an hour. “Uhhh…thank you,” is all I choke out. I tell my work buddy Roger that I won’t need a ride to the shop after all.

Soon I have my key, my car, and a sparkly new rear window. Back at my desk, I immediately peck out a google review of my own:

I showed up at 6:45 am, expecting to drop the key and bike to work, but was greeted by the owner, who offered to drive me to work in his truck! After the rear window had been replaced later that day, he called and offered to drop off my completed car at my work, at no additional cost. Wonderful service above and beyond all expectations – I highly recommend!

I probably could have found a shop to replace the window for less than $432, but I have zero regrets. When you find a company that takes care of its customers – even a new one like me – as well as Superior, you don’t have wandering eyes. You realize the glass isn’t always cleaner on the other side of town.