You are here: Home / Politics & Finance / Is It Possible to Be a Republican And a Never Trumper?

If you follow the Mainstream Media, you’d think that all Republicans march in lockstep (no Nazi reference intended, heheh).

But no. It’s an endangered breed, but Never Trump Republicans exist.

I am willing to forego all future opportunities in the Trump administration and go on record: I am a proud member of the Never Trump club. And a Republican. Sort of.

I’ve been a registered Republican since I was old enough to vote. But I’m not very loyal. I have nothing but contempt for the concept of party-line voting.

Increasingly, I’m discovering that my strongest GOP positions are those that have been abandoned by the populist/nationalist Trump swerve. I believe in (mostly) free markets and free trade. I believe in balanced budgets. I believe in healthy immigration. These are all principles held by the national GOP until fairly recent times.

Don’t get me wrong – I’m also pro-life and believe in low taxation, which are more current GOP orthodoxy.

Much of my worldview is informed by my faith – one that Trump says he shares.

Jesus was Trump-like in a way. He was a radical smasher of the establishment. He didn’t drain the swamp, but he hurled a meteor-size boulder into it, causing ripples that are felt to this day.

If Jesus had a twitter account, he would have been equally shocking. Jesus was loving, but he didn’t suffer fools either. When Peter thought he was being a bestie by telling Jesus he didn’t have to die, a smartphone-wielding Jesus would have likely launched this burn of a tweet:

But that’s where the Jesus/Trump similarities end.

As a Christian, I often think about ‘What would Jesus do?’ I know it’s become a cliche phrase, but it really is a useful thing to contemplate, even if it is wildly unrealistic for us to emulate.

Look at how Trump treats his opponents. He led “Lock her up” chants during the presidential campaign, without much justification. And he continues to obsessively denigrate Hillary Clinton more than a year and a half after the election.

For contrast, how did Jesus treat Judas, the disciple who betrayed him to death on a cross? He washed his feet the night before his crucifixion.

Picture Donald washing Hillary’s feet for a second. No? I didn’t think so. He is not exactly known for his servant leadership.

Trump and his supporters might argue that the end (gaining and maintaining power) justifies the means, but does it?

I admit to being unhealthily-obsessed with Trump. I regularly check twitter every day. I actually care about which celebrities publicly support or denigrate our president, even though I know it doesn’t mean anything. I skim my iPhone news feed occasionally, searching for Trump stories.

From the beginning of his candidacy, I’ve vacillated between ‘Trump is a depraved genius’ and ‘Trump is an ignorant moron.’ Trump himself would probably go for the former because it has ‘genius’ in it, but I think that probably proves the latter.

Why do Christians like Trump? For a few reasons, I think.

To that last point, I also plead guilty. We proudly hang a family-themed shower curtain in the bathroom: 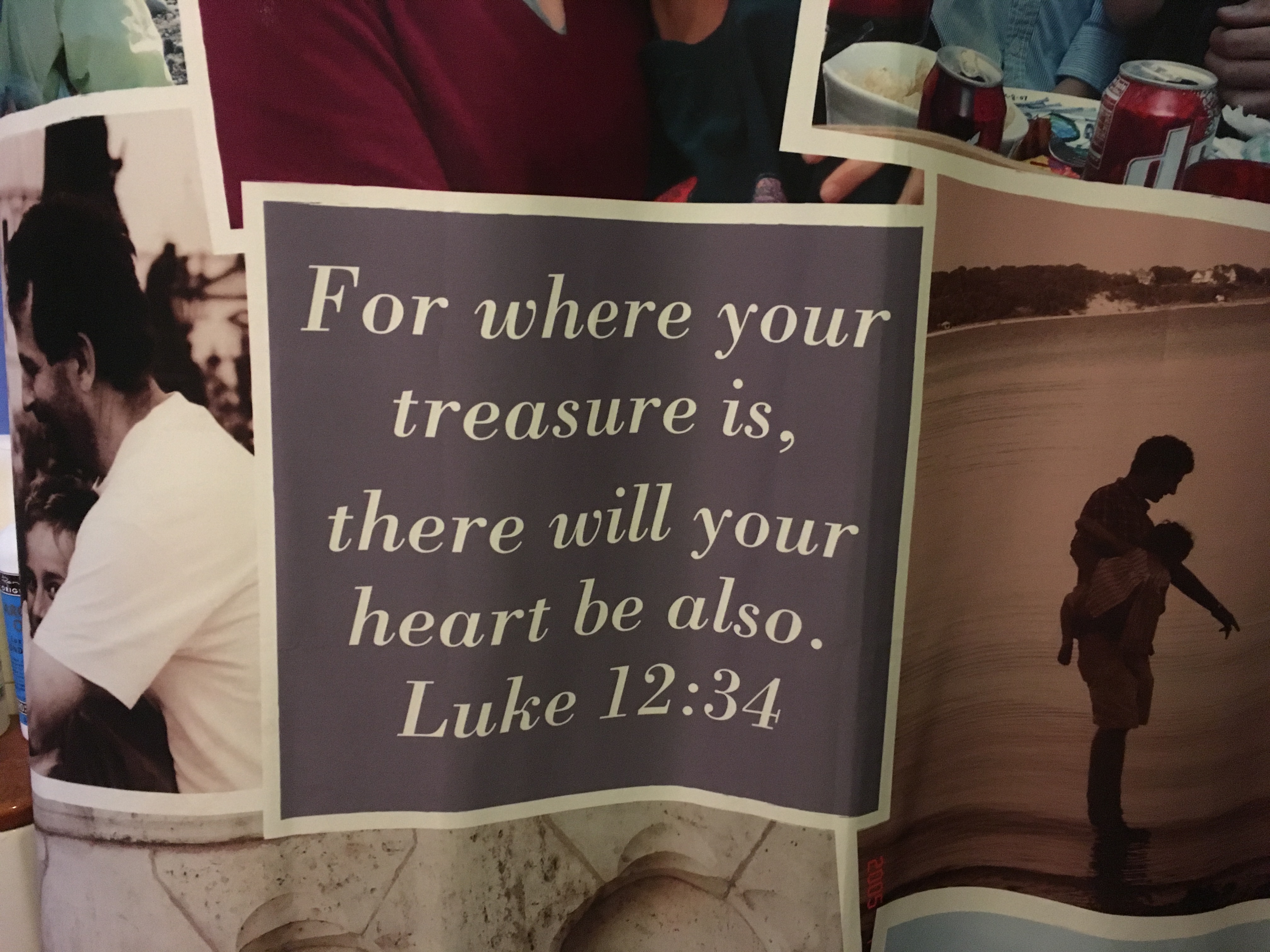 Of course, Luke 12:34 has nothing to do with family, but rather about putting God first in your life. But my human brain substitutes family for faith and because our culture celebrates family, I feel good about myself.

Why can’t I get on board the Trump Train? Because Donald Trump cares about himself more than anything, damn the consequences.

He attacks the press, because he wants people to disbelieve damaging news stories.

He attacks the FBI and justice department, because he wants people to disbelieve their damaging findings of lawlessness.

He divides people by religion and ethnicity and immigration status, because it advances himself politically.

He cuts taxes without decreasing spending, because it fattens his wallet, and the crippling financial reckoning won’t be felt until he is out of office.

He doesn’t divest of his businesses, because he wants to make money off the presidency.

And not least of all, he role plays being a Christian, to ingratiate himself with religious Christians and cultural Christians. Only God knows his heart, of course, but it’s not hard to imagine Trump scheming while Mike Pence is lost in prayer.

Still, I pray for Trump’s success. It is something I am called to, and it’s for the good of our country.

Not so much success, however, that he gets reelected in 2020. Trumpism has been an interesting experiment, but I’d rather leave the establishment-smashing to God. He cares a lot more about our welfare.