You are here: Home / Politics & Finance / I’ve Never Participated in a Demonstration – Until March for Our Lives

I’m not an activist. Before this past Saturday, I’ve never participated in a political demonstration of any kind. No marching or sit-in or boycott.

I have moderate views on most issues, and I’ve always felt the payback on political demonstrations is somewhere between a waste of time and a big waste of time.

I wasn’t even sure if I’d participate in March for our Lives, the teen movement to end gun violence. Nora and Grey left for Maine on Friday for spring break, which left Pippa and me at home alone. So I was looking to her to decide what to do. This is a student-led thing, right?

I was thinking hard about it though. I have two kids in high school and a wife who works in a school, so I’m at least as invested as any other parent.

Nora isn’t the type of person who hears gunfire and rushes toward it, but I’m pretty sure if she was in the hall with students, she would use her body to shield one or more of them. If you work in a school, it’s because you love kids. That’s why the adult casualty rate at Sandy Hook and Parkland was so high.

In the week leading up to the march, I felt a heart tug to participate, so I started googling sign ideas. I’m a marketing guy and nothing beats a pithy written message. As a Christian, I wanted one that would make other Christians think. After all, I think the Venn diagram of ‘Evangelicals’ and ‘Gun Lovers’ is nearly concentric.

I liked this one that I found: 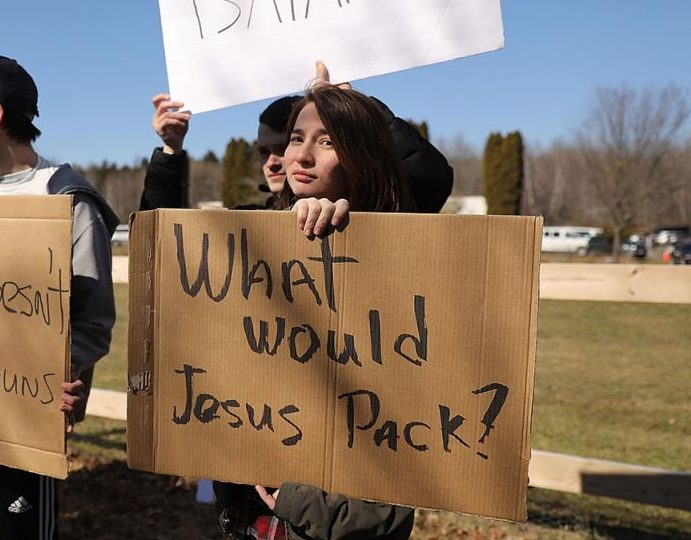 Any great sign needs art, so I asked Grey, the best (and only) family artist, to develop something. “Can you draw a picture of Jesus holding an AR-15?” I asked.

Grey draws like I eat fritos, so he was half done before I had a chance to ask, “You know what an AR-15 looks like?”

But no matter – a few minutes later he finished and presented his work. I thought it looked pretty good, but Nora thought Jesus’ halo looked like a hat and Pippa thought the gun looked like a drone, so Grey turned the halo into a sombrero and added a tagline: 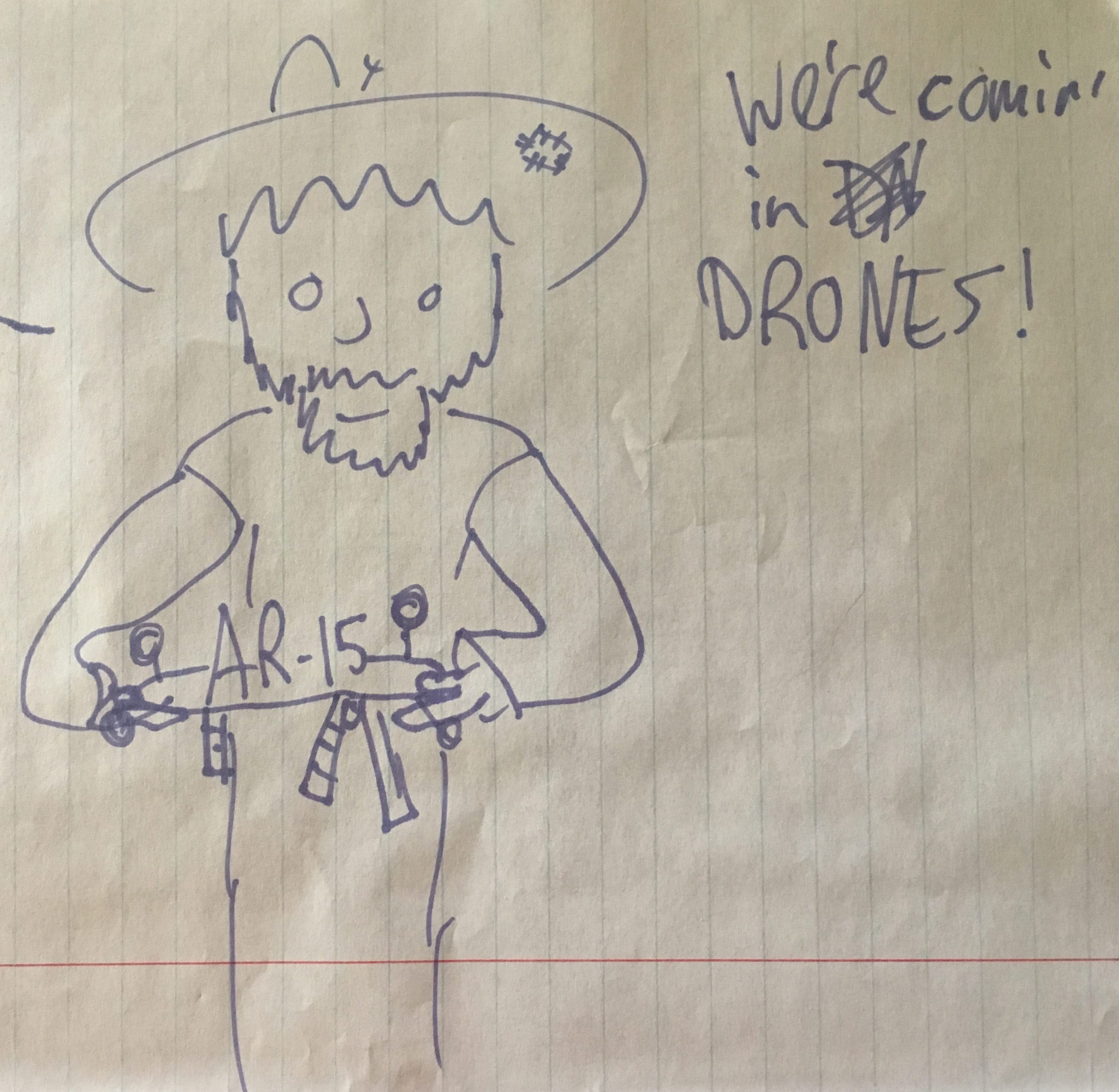 “I think the Mexican Jesus is going to confuse people,” I said.

The sign on hold for now, we had a decision to make – attend the local Baltimore rally or schlepp to DC for the big kahuna?

Baltimore was convenient for logistics and time investment sake, but I was not enthusiastic for a couple reasons.

First, Baltimore rallies are almost always anemic because we are so close to DC, so the majority of people, especially the most passionate, just bite the bullet (no pun intended) and make the 35-mile trek to our nation’s capital.

Also, I knew the Baltimore march would have a different focus – on the street gun violence that puts the city near the top of the nation’s per capita murder rate.

As a Baltimore resident, I’m equally invested in this issue as well, but the roots of this violence are deep and the solution non-obvious. Most all Baltimore murders are committed with handguns, which I think should be legal. And when these guns are acquired illicitly, the notion of improving background checks is silly.

Friday night and Pippa can’t decide if she wants to go to either rally. Saturday morning, under the spell of a warm bed and a mindlessly-entertaining phone, she says she’s out.

Undeterred, I tell her I’m going to DC anyway. I call Nora in Maine with the news and she asks to talk to Pippa. I’m not sure what they discussed but somehow the warm bed spell was broken. “I’m in!” she shouted when she hung up.

Activism on a Budget

Last-minute anything isn’t normally conducive to saving money, but being naturally frugal, my mind immediately identifies the top two potential hits to the wallet: parking and food.

I say parking because it’s too late for public transportation or car pooling, which would have been the best options if we’d had our act together. But we didn’t, so I suggested we drive to the National Arboretum, park for free, and bike the 7 miles downtown.

Pippa rejected that option as way too much work, so I contacted a good college friend who lives on the East side of DC, right off I-295. “any chance ur home this am?” I texted to Gigi, hoping I didn’t sound too desperate.

An eternity later – aka 40 minutes – my phone dings and I fall on it. It’s 10 minutes before we are scheduled to leave and I had already resigned myself to a $30 lot fee.

But no, she had good news: “Hi! Just woke up. I’m around!” I asked if we could use her visitor parking pass and if she wanted to march with us. Amazingly, she cancelled her plans and agreed to go. Yay!

We parked outside her condo, walked the 2 miles to Capitol Hill and fell in with the other demonstrators. 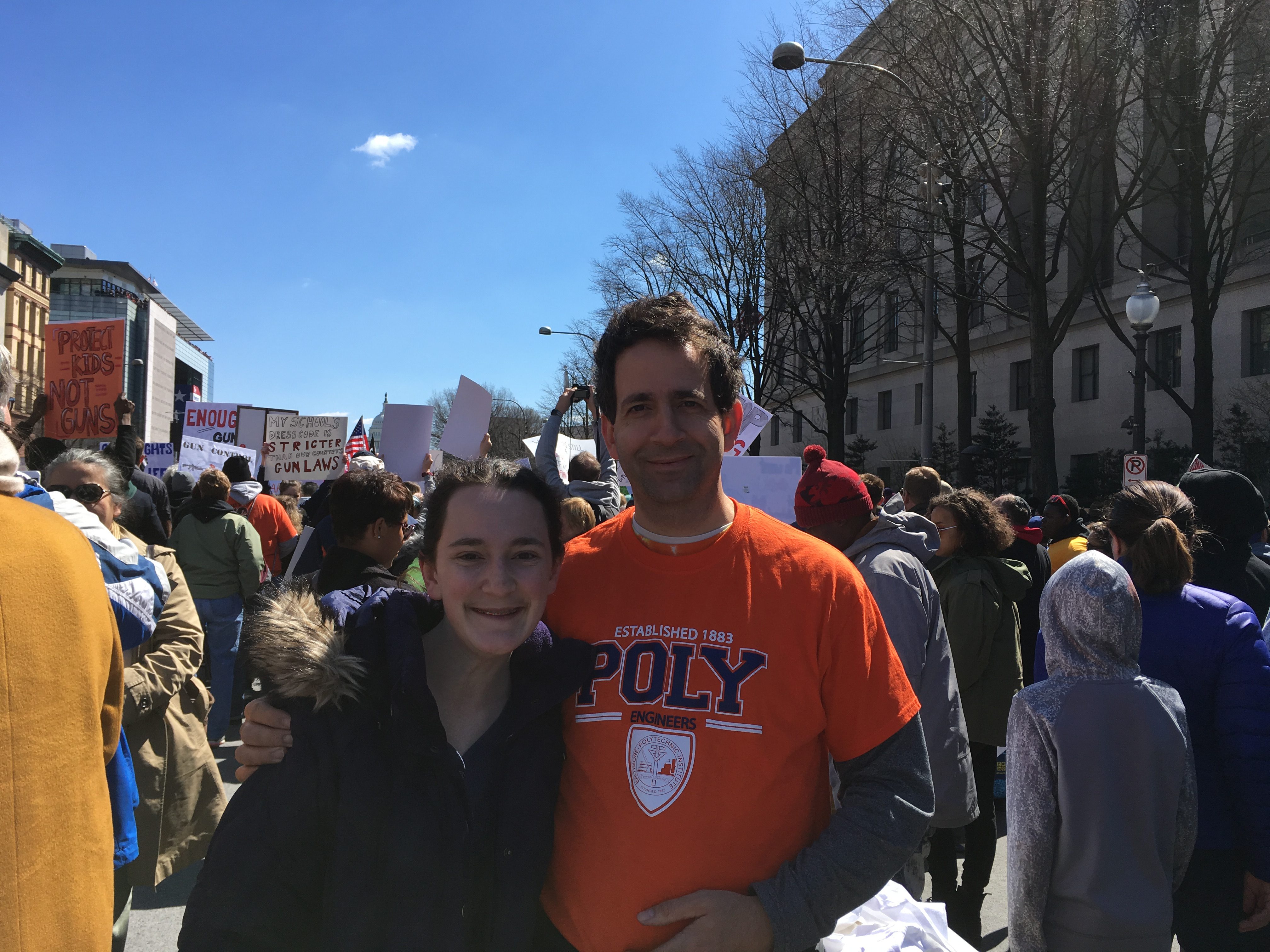 It turned out to be more of a stand than a march, but it was inspiring to hear so many passionate teen (and younger) speakers and to see (on a screen anyway) Lin-Manuel Miranda perform his latest Hamilton-influenced collaboration.

Related: Our Hamilton the Musical Experience

Shunning the food trucks, we munched on peanut butter sandwiches, fritos, and grapes I hurriedly packed that morning.

I had heard that some Christian women had felt excluded and alienated from the big Women’s March in January 2017, but I didn’t feel any hostility. There was some rude and crude signage, but they were all less offensive than what you’d see and hear in a typical R-rated movie.

Alas, we were sign-less due to our indecision, but I felt vital anyway.

Later that evening, we joined family for dinner. It was a get-together that was planned weeks earlier.

Most of my family maintains rural lives and retains conservative values.

“Hey Barn, I heard you went to that march in DC today,” one of the guys said. “We went shootin’ instead.”

“That’s great,” I said, careful to not recklessly lunge for the shiny lure. I was happy to go there, but was determined to not sound whiny or radical.

And frankly, I think sport shooting and hunting are awesome pursuits. I grew up hunting with my dad, sharpshooting in 4-H, and skeet shooting with family. I enjoyed it, but would have liked it even more if I was any good at it. The ritual goose cleanings didn’t help either.

Subtlety isn’t a thing in our family, so I wasn’t surprised when the ribbing returned after dinner in the form of a question: “Remind me, was that rally today for guns or against guns?”

In other words: Why are you acting so weird by going to one of those libtard things that affects my God-given Constitutional rights?

Because no rights detailed in the Constitution are absolute. You can’t buy an automatic machine gun. You can’t yell ‘Fire’ in a crowded theater.

Because we’re the only country in the world that has more mass shootings than holidays. The Onion says it best.

Because it’s easier to buy a gun than Sudafed or lawn darts or fireworks.

Because if it takes 2 minutes for a school officer to respond to a shooting, the AR-15-wielding gunman could have fired 90 rounds already. That’s if the officer isn’t hiding (Parkland), or unarmed (a Baltimore requirement), or accidentally firing his gun.

Because armed teachers will leave their guns in the bathroom, dangerously discharge them, and will one day accidentally kill an innocent student.

Because no one should be afraid to go to school.