You are here: Home / Politics & Finance / How I Learned that Deficit Owls Rule the Roost 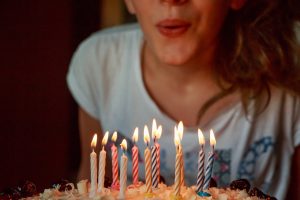 Last weekend, my niece had her Sweet Sixteen family birthday party. I was looking forward to celebrating with her, of course, but secretly equally excited to talk with Cole and Sienna before the election.

I had a theory. The national annual deficit and growing accumulated debt aren’t much of an issue this election, despite their increasing liability.

How better to test that theory then to talk to two voters on opposite sides of the political spectrum.

So I sidled up to Cole, my conservative cousin, in the buffet line. “Hey man, what would you say are your top 5 things you care about in a presidential candidate?”

He didn’t hesitate: “Pro-life, defense of marriage, shipping illegals home, ISIS smack down, and won’t blow the budget. Do you see why I like Trump? Why do you ask?”

“Nothing, just doing an informal survey.”

Ok, my theory is half wrong, now to find Sienna, my liberal friend. I find her near the liquor cabinet, keeping one eye on her Dewars and one eye on Cole.

She doesn’t mind engaging with him for brief skirmishes, but she finds it emotionally draining if it goes on. And worse, she gets annoyed when Cole doesn’t seem affected by one of their disagreements – from all appearances, he has the emotional range and memory of a goldfish. Sounds like a put down, but I think it’s a benefit in terms of mental health and happiness.

I asked Sienna the same question I asked Cole. She had to think a little, then: “Feminist issues, minority rights, the environment, fiscal responsibility, and gun control. And by feminist issues, I mean reproductive rights for all women, equal pay for equal work, domestic violence protection, rights for sex workers, and protection from female genital mutilation. And by minority rights, I mean…”

I was tuning her out now. My first thought: Sienna is a little cheater in this survey of mine, giving me broad categories, then providing multiple issues under each one.

Even more disturbing: I’m realizing I’m 0 for 2. Cole and Sienna do care about a balanced budget – they both mentioned it in their Top 5.

So what gives? If I were to expand this small sample across the entire U.S., everyone would vote for a fiscally-responsible candidate. I don’t think sampling works quite like that, but still, Cole and Sienna hardly agree on anything.

Time for a follow up question. “Sienna, how do you think we should rein in spending and/or increase revenue?”

“Oh, that’s easy, I’d cut 50% from the Pentagon budget, and also ask the wealthy to pay their fair share.”

“What about entitlement programs,” I say, knowing that they account for a majority of the federal budget.

“No, that wealth redistribution is important for the most vulnerable and needy in our society.”

Hmmm, back to Cole.

“Oh that’s easy,” he says. “I’d eliminate fraud and corruption – that’s a big savings right there. Then, I’d cut taxes. Sounds counterproductive, but the resultant boost to the economy will more than offset it.”

Sounds like trickle-down economics, which has been mostly debunked. “What about entitlements?”

“Oh, I’d totally reform welfare to put people back to work. The health programs and Social Security can stay as is – I’ve worked hard to contribute to those.”

Therein lies the rub – neither Sienna nor Cole want to touch the expensive programs, and payroll taxes don’t come close to paying for them. And good luck raising taxes to fully fund government.

In a democracy, candidates score votes by promising higher spending and lower taxes. The last balanced budget? During Bill Clinton’s presidency in the late 90s.

Since then, it’s been all downhill, with an acceleration during the Great Recession when the Feds made ginormous stimulus expenditures.

Today, 6 cents of every federal dollar is spent on interest payments, to the tune of over $400B a year. That’s a lot of cabbage! And that’s with historically low rates of just over 2%. Payments will balloon when rates rise.

How to respond? Depends on where you fall:

Deficit Hawks are extinct as far as I can tell. I don’t know anyone who doesn’t believe government needs to step in and give a seriously-stumbling economy a boost, for psychological confidence-boosting reasons if nothing else.

And Deficit Owls are generally the domain of ‘The World is Ending Soon Anyway, So We Don’t Have to Worry about It’ groups. Perhaps, but for Christians who believe that the end times are imminent due to their clever matching of biblical signs and current events, I give you this: Jesus doesn’t know when He’s coming back. Only the Father, as explained in Matthew 24:36 and Mark 13:32. I don’t know about you, but if Jesus doesn’t know, I sure can’t figure it out. And I thought me and my Dad don’t communicate well!

That leaves Deficit Doves. The problem comes when Doves morph into Owls, due to weak leadership and an inability to make hard choices.

After all, families must learn to balance their home budgets, why shouldn’t government do the same? To do otherwise is to pass a massive burden to our children and grandchildren.