You are here: Home / Travel & Finance / I Lost My Shirt in Belize 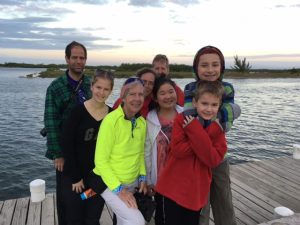 In January, Grey and I went to Belize with my mom, my sister, and my brother, and their families.

We weren’t planning, or budgeting, to go, but as the trip drew closer, it became clear that Grey and I could get away (Nora and Pippa couldn’t), and that another multi-generation family trip probably wouldn’t happen again for a while. So we dipped into the rainy day fund to make it happen.

If you read this blog, you’ve learned that travel is one of our few reckless financial indulgences, enjoyed with no regrets. We might get a better return on investment for a new video game console for the kids (where ROI = [hours of enjoyment] / [investment]) but who can remember a specific video game memory 20 years later? It’s all a haze. A pleasant haze maybe, but a haze nevertheless.

In summer 2016, we went on a lovely summer trip to Paris and the Loire Valley with good friend Fiona. We’ve gone to Europe a handful of times now, so I have the money thing mostly figured out: Take very little cash, then withdraw some local currency at an in-country ATM, and pay for the rest via credit card. Simple, secure, low cost.

I thought Belize would be similar. Big mistake.

It hardly needs stating, but always do your due diligence before you travel to a new country. It can save you a bundle.

I went to Belize with $250. At the end of the first day (a long shuttle ride from the airport to Placencia), I was already down to $170.

Turns out, everything in Belize is cash-only and U.S. dollars are accepted currency. If I had done even the most basic research, I would have known that.

By day two I had committed, along with everyone else, to a pricey ($70 per person) Monkey River tour. For those keeping score at home, that’s another $150 for the two of us (including tip), leaving $20.

A lousy Andrew Jackson, with no bank or ATM within shouting distance.

So I’m reduced to begging for a loan from my family, an uncomfortable situation because everyone else has a carefully-calculated reservoir of cash. And because I’ve had a reputation of being stingy since childhood.

I’m going to say that cheap reputation is unjustified, but penny-pinching people always say that don’t they? (Unless you are one of the few that celebrates your frugality) I got the loan with minimal grumbling, but I could sense some discomfort.

I finally found an ATM, but it was painful: A $7.75 fee and a 1% service charge. A real contrast to my free Bank of America ATMs at home.

Of course, I didn’t want to withdraw too many Belize dollars, because then I’d have to go on a vacation-ending shopping spree, or be charged a fee (and perhaps a crappy exchange rate) when I changed them back to U.S. dollars.

So naturally, I undershot, causing me to visit the ATM a 2nd time later in the trip! Another $7.75 fee. This horror movie was so scary, I was looking through my fingers at the ATM screen now.

My only consolation? I wasn’t the only one who failed to do my homework regarding Belize.

My brother Grant (you can read about his other adventures here) flew from Baltimore to Houston, where he was grounded due to not having the proper notarized documentation for single parent and child travel, a requirement of the Belize government. He had to cool his heels there until his wife Krista, back in Baltimore, could get the paperwork completed and faxed to Houston.

I don’t know about you, but if I were to run off with the kids, it wouldn’t be to Belize – the ATMs are too expensive there.