You are here: Home / Misc Finance / My Jury Experience Opened My Eyes to a Broken Baltimore

At first I thought it was a terrible mistake. I thought my outfit or education or skin color would surely disqualify me in the eyes of the defense, as it had before. But incredibly, I was empaneled with 13 other jurors (12+2 alternates) for a sting case. 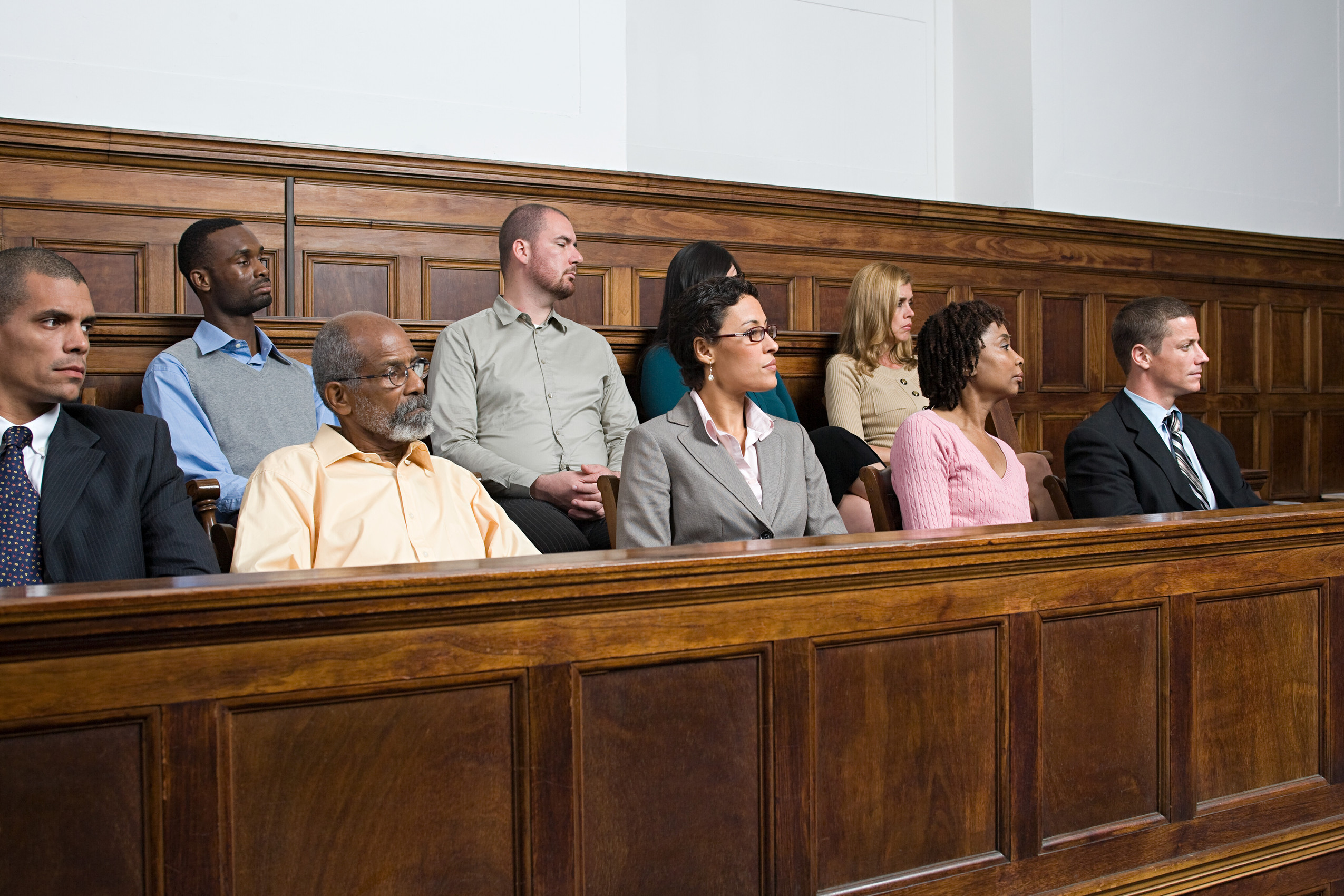 Over the next couple of days, we learned how an undercover Baltimore cop pulled up to a known drug corner and bought dope with marked money. Transaction complete, he pulled away, while the cavalry descended. It’s known as a Buy-Bust, we were told.

The only defense witness I remember was a character witness who noted that the defendant was a father who wouldn’t risk his relationship with his son by engaging in risky behavior.

A day and a half in, the prosecution and defense delivered their closing statements, and we were led to a cramped deliberation room. I figured I’d keep quiet at first, then make the guilty verdict unanimous.

But it didn’t work that way. One-by-one we went around the room and the other jurors expressed different degrees of doubt about the defendant’s guilt, and how the case was handled.

I was dumbfounded. Was I mistakenly directed to the wrong deliberation room?

Had they heard the same evidence I had? There were some minor inconsistencies in the case, but I didn’t think they amounted to…even a small pile of beans.

When the figurative mic got to me, I felt 26 eyeballs bore into me. I leaned forward and swallowed awkwardly: “I think he’s guilty.”

A hush. Then came the left-field responses. I remember like it was yesterday.

One woman said, “I was arrested and locked up and I was treated like shit!” I’m thinking: Ummm, you sure you’re eligible to be on a jury?

A man: “Imagine that defendant was your brother! How would you feel then?” I’m thinking: I’m pretty sure that’s why they don’t let family members serve on juries.

And my favorite from another man: “I don’t think the defendant’s guilty, I think the cop that bought the drugs is guilty – they should lock him up!” I’m thinking: How do I get out of here?

This went on for a while, my frustration slowly building, before my mind stumbled on a crazy idea. “How many people in this room think that OJ Simpson is innocent?” I asked. This was 1998, a couple years after the former football star was found not guilty of killing his ex-wife and her boyfriend. A trial that many people thought – me included – was corrupted by OJ’s money and celebrity.

A majority of hands went up, including one guy who raised two. It reminded me of OJ trial H-Hour when the verdict was announced on TV, and many black people cried and danced, while many whites went slack-jawed: 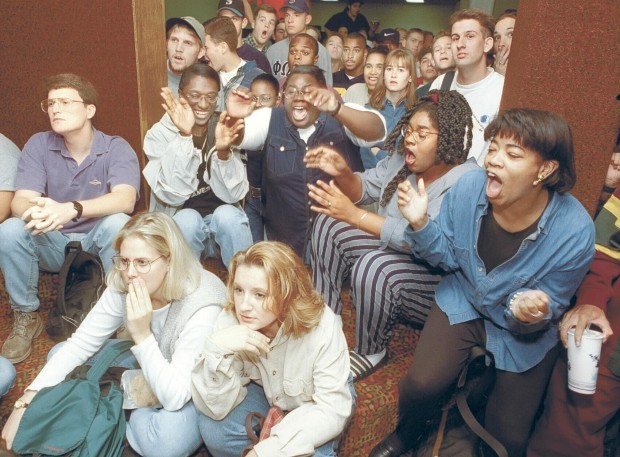 There we have it, I thought. This wasn’t about the merits of the case. It was about experience and worldview.

I had heard that the relationship between police and residents was fraught in some neighborhoods, but I had no clue really. Except for moving violations, all my encounters with police were positive. The police officer who came to my grade school and let us try on his badge and holster. The smiling and waving cops at the Kingsville Fourth of July parade. The professional and upbeat officer at the sobriety checkpoint.

It would be years before I comprehended the vicious downward spiral of inner city life and its policing. As best I understand it, this is how it starts and how it worsens:

And on and on, slowly getting worse every year.

With businesses and middle class families deserting these ghettos, where is the Church? To the credit of many pastors and laypeople, it’s still there, but it struggles to compete with the siren call of the street.

From the outside, nothing seems too amiss. The reservoir full of super-heated cooking oil doesn’t boil – it just simmers. Until a frozen turkey is lowered into it, and it explodes. 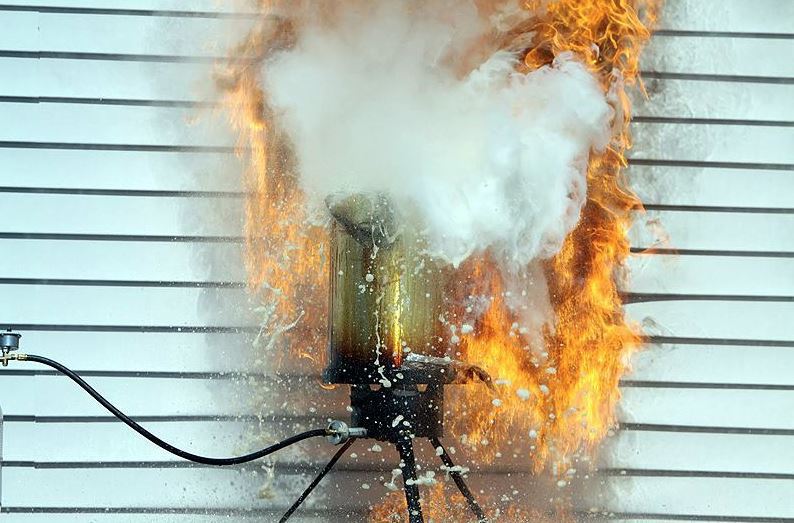 In 2015, the meat was Freddie Gray, who died in police custody. Baltimore exploded into riots, and the dysfunction was laid bare for all to see.

What is the government’s response? The federal government ignores, the state throws money at it, and the city flounders.

Since the early 1990s, $130M in public and private money was invested in just one neighborhood – Sandtown-Winchester, where Freddie Gray was arrested. The effect? Over 1,000 homes were built or renovated, schools were refurbished, health services were launched…and it’s still one of the poorest and most violent areas in Baltimore. The state spends nearly $17 million just to incarcerate its former residents and life expectancy is 10 years below the national average.

City politicians are more focused on election than on new approaches that might turn the tide. In the recent primary, City States Attorney Marilyn Mosby was re-elected, despite a poor conviction rate. Why? One of the main reasons was the way she aggressively pursued criminal charges against the police officers who arrested and transported Freddie Gray the day he died. Never mind that legal experts said the charges would be impossible to successfully prosecute – it was the ballsy approach that counts.

What is a Christian to do?

Engage with City People. One of the contributing factors to Baltimore’s decline is how many people have fled the city – 5,000+ in 2017, and hundreds of thousands more over many decades.

God can soften a heart, but overt ‘Road to Damascus’ events are rare. Primarily, he works through people. “The harvest is plentiful, but the workers are few.” Matthew 9:37

Pray: That God would use you to love people in someplace hard like Baltimore.

Tether Yourself to God. Volunteering at a soup kitchen once a month, or writing a check to an after-school program is good, but it’s not enough. A city rescued from poverty and violence is more comfortable, but it’s not truly saved.

“I am the vine; you are the branches. If you remain in me and I in you, you will bear much fruit; apart from me you can do nothing.” John 15:5

I wonder if everyone in Baltimore regularly prayed these two things, how much different the city would be.

For a related piece, read Why we live in Baltimore despite its problems.