You are here: Home / Love & Finance / When Nora’s Car Died and I Rushed to Replace It 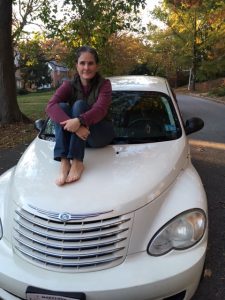 I was driving down the New Jersey Turnpike in our trusty PT Cruiser, straight off the plane at JFK airport. I’d come home early from a family vacation to return to work. I had drained my vacation leave.

Nora, Pippa, and Grey and Nora’s college roommate Fiona were still in Hungary. Nora and Fiona both work in schools, so they could afford to spend a whole month in Eastern Europe. Time-wise anyway.

A casual glance at the instruments, then panic – the car temp is HOT! No physical manifestation, just a red-lined thermal gauge. Should I pull over or try for the next exit? I limp to Exit 2, then check into a flea bag motel. I’ll be parked outside Pep Boys when they open at 8 AM the next day.

A long wait, then the news: The engine is cooked. I might be able to nurse the car home, but it would need a head replacement. Already north of 100K miles, the repair cost would outstrip the value of the car.

The 82 miles home was the longest 82 miles I’ve ever gone. I’d drive for 15 minutes, the engine would overheat, I’d stop, let the engine cool, top off the coolant, and start all over again. And all the time I was thinking: Nora is going to kill me.

I’m not sure why, but Nora loved that PT Cruiser. She even had a name for it: Pretty Thing. What do I do?

Like most other budget-conscious Americans, I went to the holy grail of 2nd-hand things: Craigslist. A search for ‘PT Cruiser’ returned too many results, all within easy driving distance. Are there a lot of PT Cruisers out there, or just an out-sized number of people looking to get rid of them? No matter. Nora will want a replacement Cruiser, so that is what I’ll find, and pronto – she’ll be home in one week!

I connect with a young woman in Owings Mills, a suburb of Baltimore. We meet and I notice right away that the front tag is missing. That’s OK in some states, but not Maryland.

“Oh, I only use the rear tag. I work at a jail and when we park there, we all back up against the building so that no one can trace our cars and track us down.” She seemed very blase about it.

“That’s different. Have you ever been pulled over for it?”

“Yeah, once, but I explained it and it was OK.”

Ever so slightly, I could feel my Spidey sense tingling.

I circled the car, did a cursory inspection of the engine (had to maintain my Man card) and asked to take a test drive.

It seems to handle alright. “How long have you had it?”

“About 3 months. I wanted a VW Golf GTI, but my parents didn’t think it was practical. They finally came around.”

The tingling became a small temblor. Who ditches a car after 3 months?

I told her I’d think about it and went home. I called a few more sellers. Typical conversation:

Me: “I see on Craigslist that you are selling a PT Cruiser?”
Him: “Which one?”
Me: “Ummm…never mind.”

Nothing is right. I call Tasha, the owner of the first car. “Hey, mind if I come see it again?”

Tasha isn’t the first owner, so the car has a number of years and miles on it. She is asking $8,700, the same price she paid, she said.

I tried to haggle – “Will you take $8,500 for it?” – but she must have sensed my desperation, and stayed firm. Successful haggling depends on the ability to walk away, but I was too emotionally invested. Nora would be home in 5 days.

“OK, I’ll give you $8,700 assuming it passes state inspection.” Maryland safety inspection is required every time a car changes ownership.

Problem was, Tasha had zero urgency. “No worries, I’ll get to it on Saturday.”  The same Saturday that Nora got back from vacation.

My mind was racing. How could I get the car in time to meet Nora and the kids at the airport with it? 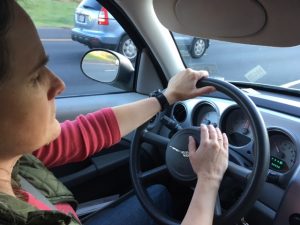 Don’t get me wrong. I didn’t imagine she wouldn’t notice Pretty Thing had been replaced, like how parents will replace an expired goldfish without a toddler’s knowledge. But I knew she’d be super impressed by my effort, and pleased it was another Cruiser. And I hoped it would assuage my guilt.

“I was hoping to get it earlier than that…If I took it now and got it inspected myself, would you pay for any upgrades necessary to get it to pass? And the cost of the inspection?” I couldn’t believe what I heard myself saying. Once I paid for it and she signed the car over, she would have no legal obligation to me.

“Sure,” she said. I felt pretty good. The car has just passed inspection 3 months ago. To give myself an even better chance of success, I planned to return the car to the same service station where it had just been inspected. And come to find out, it was just 4 miles from my office!

“Can you have a certified check by tomorrow?” she asked. “If so, I’ll drop the car off at your house tomorrow night with my boyfriend.”

Yessss! Everything was coming together.

I got the certified check. I called the station and found out the inspection would cost $80, an amount I texted to Tasha.

That evening, Tasha was punctual. We exchanged pleasantries. She signed over the title, I handed over the check. A hearty handshake, then she went to leave. Just as she reached for her boyfriend’s car door, I remembered: “Hey, what about the 80 bucks?”

“Oh, yeah,” she replied, “I forgot.” This was not an Oscar performance. Not even regional theater worthy. She pulled a wad from her pocket, thrust it at me, then hastily retreated and sped off.

“Goodbye,” I said cheerily, pretending not to notice she would have shorted me, given the chance.

Needless to say, my Spidey tingling was a full 8.0 Richter at this point. If there were small buildings near me, they would be tumbling to the ground.

No matter, it was just paperwork at this point. Inspection, then licensing.

The next day, a work buddy helped me drop the car for the inspection. Two hours later, my jaw was on the floor. “Yeah, I know it was in here recently,” said the shop foreman, “But the ziggerwatty is daggone worn out. That’s a real safety hazard you know!”

“How much?” I asked feebly.

A faint “bye” and I hung up. I didn’t want to hear any more. I felt sick. Not because we couldn’t afford it, but because now I saw clearly that God had been sending me signals, all of which I ignored, because I had my own plans. My Spidey sense wasn’t some super hero thing, it was God providing direction. Maybe if I prayed more and better I would have seen it before now.

Maybe now that my eyes were open, I could act more in accord with God’s will for my life, and achieve better success. I was now determined to trust that Tasha would be true to her word, despite my initial misgivings.

I sent her a “I can’t believe it, but…” text with a photo of the repair receipt. She too was shocked, but said she was good for it. She’d get a certified check and mail it to me. To establish trust, I told her to not worry about it, that a personal check would be fine.

A week went by and I sent a nudge text. She’d been busy, she was on it, I’d see something soon.

Another week and no check. I sent another friendly reminder. My spirit soared when she responded with a photo of a certified check in the proper amount with my name on it. This was happening!

Another week, then 2 more, and my optimism vanished like water vapor. I texted. Nothing. I called. Straight to voicemail. I’d been blocked and there was nothing I could do about it.

Would things have ended differently if I was in lock step with God’s plan for my life? Maybe, maybe not. Sometimes He uses trials to test us and draw us closer. Regardless, He does want us to pray and listen.

The irony? Despite all my efforts to accelerate the process, I still failed to have the new PT Cruiser on the road by the time Nora got back. The repair combined with a hiccup in registration meant the car was still on the sidelines when she landed.

Nora being Nora, she couldn’t have cared less. She was just happy to be home, and glad that I had a plan in place. After hugs and kisses from Nora and Pippa and Grey, I felt my whole ordeal just slip away. The financial loss and bitterness felt like a distant memory.