You are here: Home / Kids & Finance / Pippa Broke Her Arm, Then Shattered My Expectations

A year ago this week, on Monday, September 11, 2017, Pippa and I were playing a spirited game of badminton in the yard like we often do after work/school. It’s pretty competitive, with lots of grunting and yelps of victory, but it’s not very serious. Fun is the main goal.

On one rally, I hit a sizzling (OK, sort of anemic) spike to her left. She quickly transitioned to her backhand, launching the birdie high and deep on my side. It’s a common tactic employed to pin your opponent to the baseline, and buy time to return to court center.

As my gaze was focused skyward, I heard a dull thump. When pivoting back to center, Pippa had gone down hard. My arms dropped to my sides, and the birdie floated to earth.

No movement. “Da-a-ad!” You know how when they are babies and they get hurt, you can tell by the tone of the cry how serious it is?

It wasn’t a cry or a whine, but it made my neck hairs stand on end. It was the sound of fear and shock and distress all bundled together.

In an instant, I was standing over her. She was sitting up now, cradling her right arm. I looked at it, then I couldn’t look at it. Her forearm had a disquieting jog in it, just as it had nine years before, when she had an awkward fall from her school’s monkey bars.

Should I state the obvious? No, best to just focus on logistics. “We need to get you checked out,” I said, straining for my normal voice. “Let me grab your insurance card.”

We start for Greater Baltimore Medical Center (GBMC) in Towson. I call Nora to say Pippa has had an “accident” and to meet us there.

“Dad, what if I broke my arm again?” I couldn’t look at her face.

“I don’t know anything to do except to pray,” I reply. I say a silent prayer. Later I wish I had said it out loud.

In the waiting room at GBMC, the memory of all the formative moments that have occurred here washes over me. I was born here. My kids were born here. I had rushed Pippa here when she broke her arm in second grade – the same day my nephew Hunter was born here. On the other side of the building was where Pippa had released an extended blood-curdling scream, as the doctor tried to forcefully re-position – without any anesthesia – her partially-healed arm.

Nora now on site, we are escorted into the emergency room where, after an X-ray, the obvious is confirmed. Forget about badminton, legible handwriting, and maybe winter formal.

Next came the ridiculous dance that is American healthcare. GBMC attempts to set us up with an orthopedic doctor…who isn’t covered by our insurance. Through Nora, we have Kaiser Permanente, which uses its own doctors and facilities to control costs.

Soon enough, we have an appointment with a Kaiser doctor. I’m relieved he recommends surgery. I still have mental scarring from the seven – seven! – casts that Pippa went through many years previous, as they attempted different non-invasive approaches, only to resort to surgery in the end.

Surgery, a cast, then a new lifestyle for Pippa. Learning to live with a partial disability is a good thing, I tell her, trying to positively spin.

She doesn’t care that much about the potential loss of the school badminton season in the spring, but I do. For some reason, her badminton rise from junior varsity to varsity to the top of varsity has meant more to me than her academic accomplishments.

I know how that sounds, and I wouldn’t think or say it if she were a mediocre student. But she’s always been a good, motivated student and I just sort of take it for granted. I was a good student. Nora was a good student. It’s just expected, even if it shouldn’t be.

But athletic prowess? No, that’s not a thing in our family. I played JV tennis and ran cross country in high school. Though ‘flailed’ might be a better term than ‘played,’ when it came to tennis. I did well at running, but honestly that’s one step above NASCAR in terms of athletic pursuits.

My daughter was a bona fide athlete, and I loved it.

On September 22, she went under the knife. She had a plate and six screws implanted in her right forearm.

After the swelling subsided, she was fitted for a hard cast.

One month after the surgery, she had already graduated to a removable cast.

She appeared to be making good progress, but her range of movement, and confidence, were limited.

Life is what happens when you are making other plans, right? But I also knew from Jeremiah 29:11, “For I know the plans I have for you,” declares the Lord, “plans to prosper you and not to harm you, plans to give you hope and a future.”

Did prospering in this context mean playing competitive badminton again? I had my doubts. According to my best recollection, there was no “Badminton Covenant” between God and man. At the time, I felt Pippa would be doing well if one day she could simply enjoy a rainstorm without experiencing an accompanying arm ache.

After the new year, Pippa picked up her racquet again. We stood ten feet apart and lightly hit the birdie back and forth. We were done after five minutes.

Every few days, we’d try again, slowly backing away from each other and spending more time at it.

I felt she was making progress, until the physical therapist said to be sure to call if the screws in her arm started to come loose. The whole idea totally freaked her out. “Dad, could that happen?!?”

“Of course not honey,” I said, basing my response on the combination of zero years of orthopedic training, and 16 years of Pippa training.

She didn’t really believe me, but seemed reassured anyway. If I would play my role as a fake orthopedic specialist, she would play hers as a trusting patient.

The end of February, and badminton team tryouts, were less than a month away.

By tryout time, Pippa seemed practically back to normal. She complained of some soreness and decreased wrist/arm flexibility, but she looked good to me. She made the team no problem as the #2 singles player. (There are three singles players and four doubles teams on both varsity and JV). 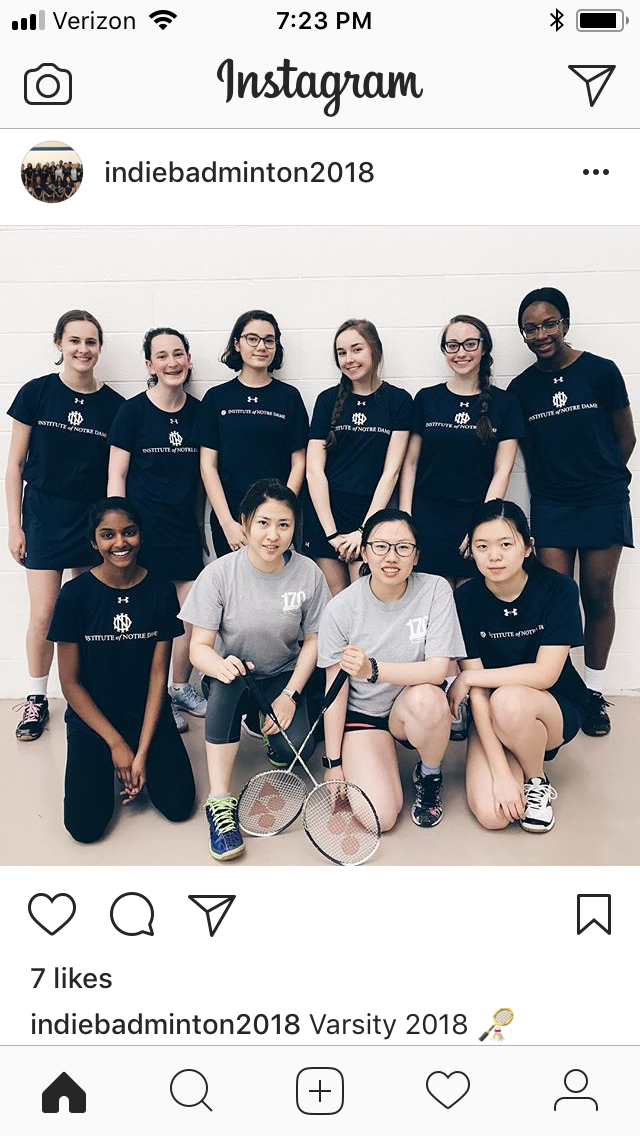 Then she graduated to the #1 singles player when Jasmine, the former #1, decided to play doubles.

Pippa’s school team tends to be weaker than others in the conference. There are fewer badminton-loving Asians in the school, and there is no affiliated middle school feeder program. So Pippa might be a #2 or #3 singles player at a top badminton school. As a result, she lost her first two matches against #1s, as did everyone else on the team.

The coaches faced a decision: Endure the season like this, or combine Jasmine and Pippa to create a doubles Dream Team.

Jasmine was game, but Pippa required some convincing – she had never played doubles before.

Her coach took her aside. “You two would be unbeatable together,” he said. “Jasmine is so graceful and powerful. And you…you are like…a rat on crack.”

Pippa died – from laughter. OK, she said, she’d do it.

Her coach was right. They did pair well together. Check out how they (near side) slide in and out of playing position during this match at Maryvale:

And how one would cover for the other despite missed shots. (They are far side this time).

The first week of May, all the IAAM conference teams meet for the season-ending championships, to crown the best singles and doubles players. It’s held at Roland Park Country School, which has room in its massive gym for seven concurrent matches! In the “B” Conference tournament, there were 30 doubles teams competing from six schools.

Tourney rules state that first match losers are relegated to the consolation bracket, and second round (and later) losers go home. As one of the best regular season doubles team, Pippa and Jasmine received a first round bye. There would be no room for error.

In the Sweet 16 round, they handily topped John Carroll, then beat Maryvale in the quarterfinals, both in straight sets. The semis and finals were scheduled for the following day.

On the way home that evening, Pippa and I discussed how far she had come. Not just in her physical recovery from a broken arm, but also in her maturity. It was two years ago that she was a timid freshman, and now she was a more self-assured girl – in badminton and in life.

“Is it me, or do you get better when the stakes are higher?” I asked. “You really seem to be laser focused, with hardly any errors.”

The following day, in the semifinals, Pippa and Jasmine were up against two Chinese students from Oldfields, an exclusive boarding school north of Baltimore.

They lost the first set 15-21. One more set loss and they were out. “Well, it was a good run,” I thought to myself. I started to relax a bit.

I was the only one relaxed. I think Pippa and Jasmine determined that if they were going down, they’d go down with guns blazing.

The second set was back and forth the whole way and went down to the wire. I resumed position on the front edge of my seat, more keyed up than before. They pulled it out in overtime: 22-20 (must win by two).

A short break then into the final set. By now, I was like a pre-teen at a horror movie, barely able to look. You could totally forget about me shooting video or taking any photos.

The third set went by in a flash, and I don’t have much memory of it. I just know I ended on my feet, clapping and shouting like a crazy man, along with Nora and my mom. Pippa, like any good teenager, pretended we were invisible.

Pippa and Jasmine were doubles champs!

And I felt sure my cardiac health must be good, if I could survive the heart-pounding I had just gone through.