You are here: Home / Travel & Finance / How a Prized Pocket Knife Was Imperiled on a Trip to See the Rockettes

You know how all the guys (and some of the women) carry guns in rural Texas?

In our family, all the guys carry pocket knives. It’s part of the 2nd Amendment, right?

On the way out the door, you grab your wallet, keys, phone, and jackknife.

I rarely use it, but no matter, it’s family tradition. My dad carries a knife, my brother carries, my brother-in-law carries, even my niece’s boyfriend lugs one around. I think it’s how she knows he’s the one (as well as you can know when you’re 17 anyway).

There’s nothing better than a sharp pocket knife when you buy a toy entombed in one of those human-proof plastic clam shells, with the kid owner perched at your elbow shaking with anticipation. Or when you have one apple and two hungry kids and a wife.

I think the knife also serves as a tenuous connection to my family’s coarse-hands heritage. My paternal grandparents ran a fruit farm, which is still in the family after hundreds of years of sweat and toil. My maternal grandfather went straight from 6th grade to the bluestone quarries of Ulster County, NY, eventually becoming so accomplished that he won a plum assignment: the cutting of Franklin D. Roosevelt’s memorial gravestone in Hyde Park.

If they were alive today, I’m sure they would scoff at anyone (like me) who sits at a desk all day and stares at a computer screen. You call that work?

My dad takes jackknife culture to the frustrating extreme. He will agonizingly open his Christmas presents with his knife, slitting one piece of scotch tape at a time, then meticulously fold the wrapping paper and insert the gift tag into the book (it’s invariably a book). He does this totally unaffected by laments that we are waiting for him, and to just tear off the wrapping paper already.

Come to think of it, Dad overdoes everything. It’s not just knife use. If he’s having roast duck, it has to be drowning in cherry sauce. If he buys a new used car, it’s going to be the largest one on the lot. If he drives to a work site, he is going to load two of every tool in the car, like it’s a rolling Noah’s Ark. And no iced tea can be consumed until it has been so saturated with sugar that not one additional crystal will dissolve in it. Then add two more packets for good measure.

One other thing he overdoes: Pocket tools. In addition to the knife, he always carries a full-size tape measure and at least 4 different-color pens. He’s the rare man who actually uses the full pocket payload of cargo pants.

No harm, no foul. Except if you take a day trip to New York, where simple tools like box cutters and rental trucks have been cruelly wielded to terrorize the populace.

That’s when you leave your jackknife home, or at least in your car.

The trip was a last minute pre-Thanksgiving splurge. Nora said “Hey you want to see the Rockettes do their Christmas Spectacular? I think you’ll love them, and I’m paying!”

Then she invited my parents (without the treating bit), which meant, with six of us, that we had to take the largest car on the lot – Dad’s car. I never said there weren’t advantages to his overdoing things.

We all pile in for the 3-hour drive to New York with me at the wheel. Arriving at the Staten Island ferry terminal, we pull into a small, out-of-the-way lot (the same one we used when we went to Hamilton), where all-day parking is $15. Not bad for NYC!

We walk to the terminal and onto the best deal in public transportation – the complimentary Staten Island ferry, which runs 24/7 and leaves every 30 minutes on the weekend. They are rare, but free lunches do exist (unless you’re a tax-paying New Yorker).

Twenty-five minutes to Manhattan, then we walk to Wall Street to mug next to the Charging Bull: 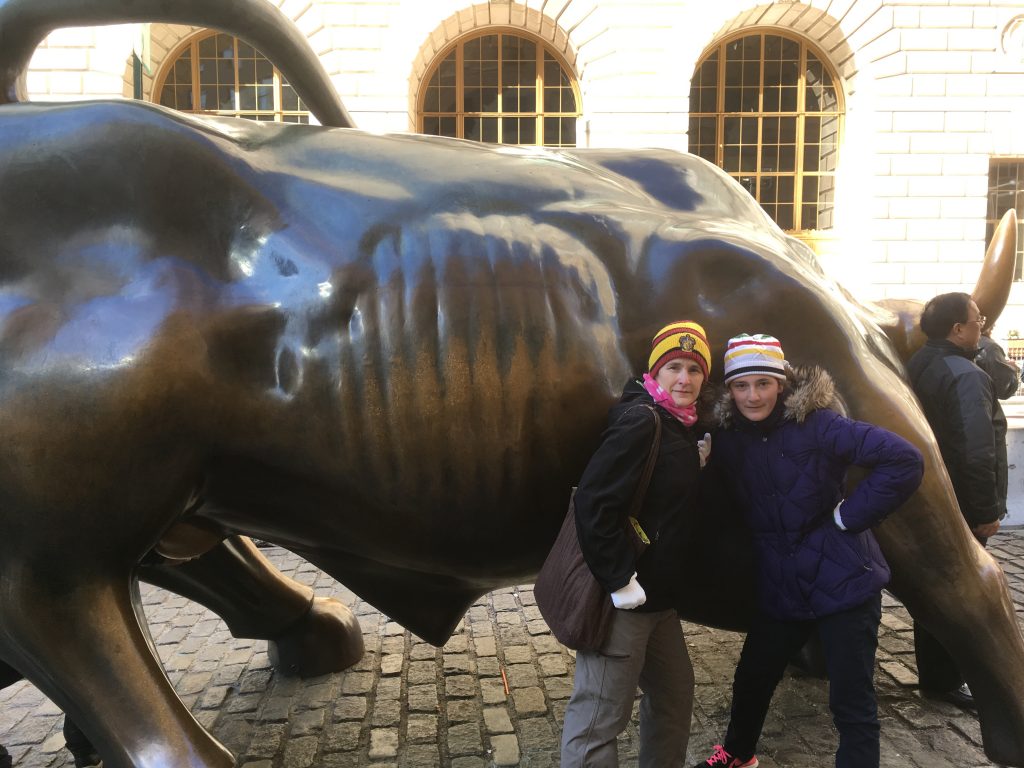 And then the nearby Fearless Girl:

Then a couple more blocks to Trinity Church, where Alexander and Eliza Hamilton (and her sister Angelica Schuyler Church) are buried. You might recall that Trinity became the tallest building in the U.S. in the 1840s when it supplanted Baltimore’s Phoenix Shot Tower, as detailed in this post.

We left the church with just enough time to hop the subway and walk the remaining blocks to Radio City Music Hall. Enough time if there weren’t a big parade, that is.

Normally I love parades, even when I don’t know anyone marching in it. But not when they stand between me and the Rockettes. It was cold, but I could feel my armpits start to moisten.

Finally, a break in the parade. A human wave pours across, like water from a dam.

We race to 1260 6th Avenue with 5 minutes to spare. We join the queue, which moves briskly along, despite a security check. 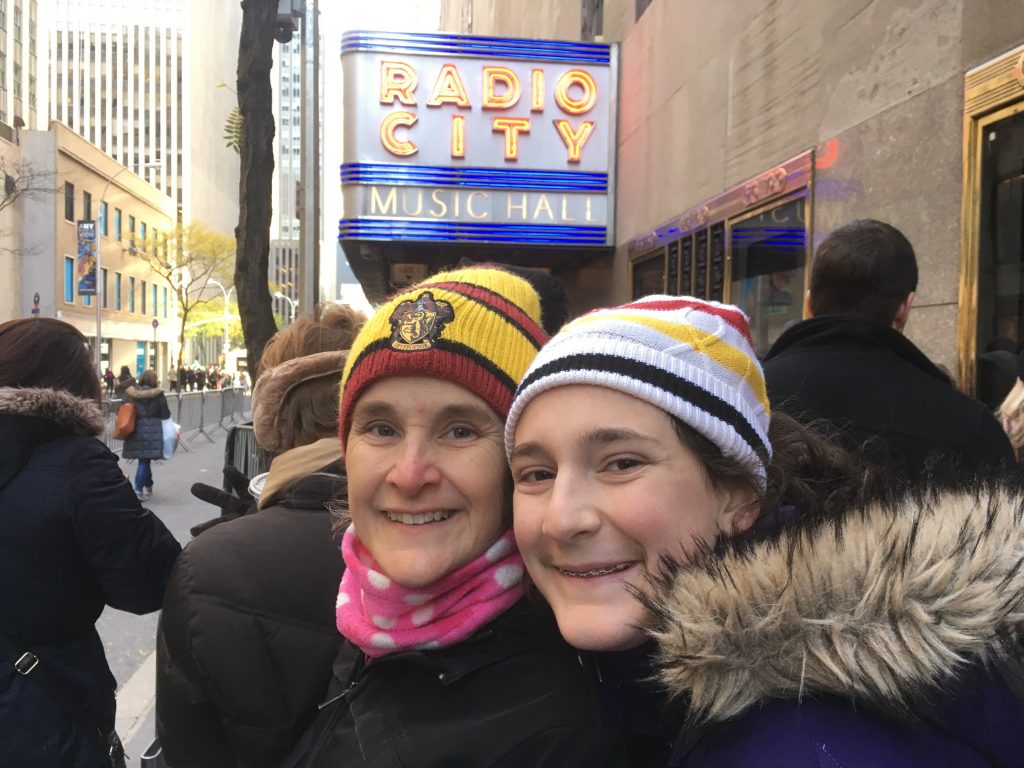 As we approach the X-ray machine, I notice my dad’s complexion shift a shade lighter, a stricken look creasing his face as he starts to empty his pockets. I realize a moment after he does that I’m the only one who left his pocket knife at home that day.

I’ve been in this position before, at BWI airport.

I remember I didn’t have time to reverse course and check my carry-on, so I took the low-percentage route – I slipped the knife into my shoe. I jammed it in there with my wallet and keys and phone, and said a little silent prayer as it set sail on the conveyor of truth.

Sure enough, while I was still mid-scan in the human X-ray machine, I could just see through the translucent plastic the X-ray video feed watcher signal to a fellow TSA agent to do a manual check.

A check that was painfully slow and deliberate. First, he pulled on surgical gloves, as if he was doing a rectal exam. Then he produced a grabber tool, like a shortened version of a beach trash-picker. One at a time, he pulled items out of my shoe until he found the knife and held it in the air in the tool’s pincers.

As I was the only one waiting and the obvious owner, he turned to me and said, “Did you know this was in here?” Which is kinda like when a cop pulls you over and says, “Do you know why I pulled you over?” The answer is obvious to everyone, but you don’t want to say too much.

Whatever I said, I must not have raised any further alarms. No room with pulled curtains. No cavity checks. I got off with a simple knife ‘donation’ and felt lucky for it.

Thinking that Radio City security might be laxer than airport security, Dad did the ‘Act Normal and Play Dumb’ routine. But that’s harder when you have a knife that is as big and beautiful as his is: A vintage stainless Ka-bar Rigging Knife, with brass liners and a marlinspike for loosening knots.

Sure enough, he was pulled aside.

Dad turned abruptly on his heels and disappeared outside with his knife. He’d departed in such a hurry that he’d left his wallet and keys in the X-ray bypass basket. Safely past security, I scooped up his belongings and waited there with Grey. I assumed Dad was striking a deal with a valet or a homeless man.

Before long, he was back with his knife still in hand! He realized he’d forgotten his wallet and keys, and his attempt to retrieve them from me breached security. The guards were sure that they had a malicious (or at least insubordinate) actor on their hands.

They expelled him from the venue and shouted after him, “If you try coming in here with that weapon again, you will be barred from ever entering.” I’m pretty sure Dad didn’t hear it; he was already long gone for a second time.

I looked at my watch and realized if we didn’t get to our seats, we’d miss the start. There was nothing more for me to do to help Dad anyway. He’d have to find success – or not – on his own.

Grey and I scrambled up many flights of stairs to the affordable section ($60 per seat) and settled in just in time for the start. I was quickly whisked away into a fantasy-land of singing, dancing, and kicking. A lifetime’s fill of kicking!

A couple times my mind wandered. Once, I imagined my dad jacked up against a wall, guards hurling insults at him. Another time, I pictured him happily turning graceful circles on the Rockefeller Center ice rink.

Ten minutes in, he burst through the section doors! Lots of commotion in the dark as he knocked and stumbled to his interior seat.

The show continued on, as light and sweet as cotton candy. I was pleased to see it end with a Living Nativity and a Christmas carol, although disappointed later to find out this scene has recently been watered down.

Afterward, I had to know: Did Dad donate the pocket knife, or did he find someone to temporarily hold it for him?

He wouldn’t say, he just motioned for us to follow him. Out of the Hall, down the street, and just around the corner – directly across from the Rockefeller rink – he reached his hand into a huge planter of chrysanthemums and pulled out his knife! 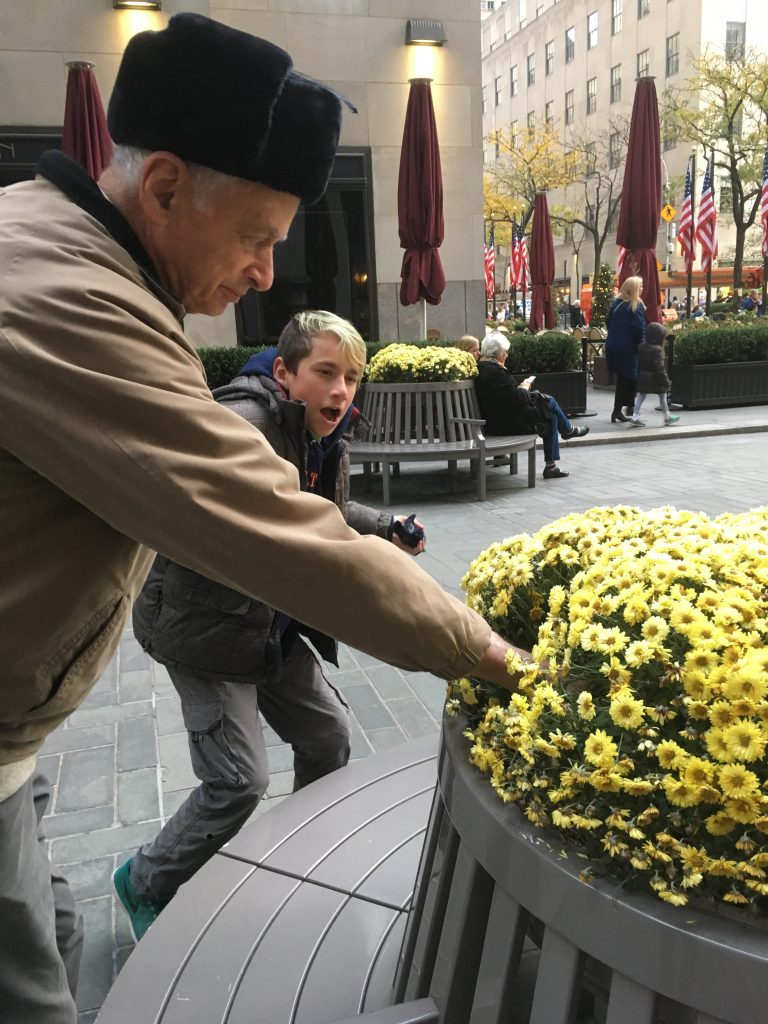 How is it that in a city on edge, where all the streets around this part of Rockefeller Center are closed to vehicle traffic, and video cameras are perched on every corner, and every third person is a police officer, that my father is able to slip a substantial sailor’s knife into a bunch of mums?

I’m not sure, but I’ll never look at a planter full of flowers the same way again. I’ll always wonder what is hiding beneath the blooms.