You are here: Home / Misc Finance / I Ran Out of Gas on the Highway on Monday

Last Monday, I step into the car to go to work. It’s chilly and dark. It’s drizzling. And I’m almost out of gas. It’s Monday morning all right.

I feel like I have enough gas to get to work. It’s a bar gauge, so it’s hard to tell, but the last bar is only slowly blinking, indicating that I still have the fast blink period to go. I’ll be OK.

I’m cruising along the highway with the news on when I feel a little hiccup. My stomach clenches; I know instantly what it is. My hand flashes out to kill the radio – I need total focus. Seconds later, the starved engine quits and my Scion slowly decelerates. My only thought is to get out of traffic as much as possible.

There’s a shoulder but it’s edged by a guardrail. It will have to do – the other side of the road is no better, and I don’t have the momentum to get there anyway. I slow to a stop and put on my flashers. There is about a foot between my car and the highway’s white line. The car rocks side-to-side every time a vehicle shoots past.

I have two immediate thoughts:

I’m not far past an exit, so I’ll head that way. The drizzle has stopped, thank God. I have to wait for a break in traffic to exit my car. I glance in my side mirror and see nothing but a string of white and amber headlights as far as I can see. This is a primary Maine-to-Florida interstate, so traffic gaps are rare, especially at the beginning of rush hour like this.

I see a small break, and I explode out of the car. I almost get the door closed again before the next line of cars and SUVs is on top of me.

Again, I’m thankful for something that hasn’t happened: A flat tire. I’d suffer a severe case of the yips if I had to change a tire in this environment.

I lock the car, but I’m not sure why. I activate my Runtastic app to chart my distance. I start a slow jog against traffic. I can’t see the exit, but I’m sure it isn’t far. I try to push it out of my head, but I know that if someone is surprised to see me in the semi-dark and slams on their brakes on the wet road, that I’m as vulnerable as a bowling pin to a sliding ball. And a lot less durable.

I get to the clover leaf. My attempt to cut across it is foiled by a wide ravine filled with runoff rainwater. I backtrack to rejoin the road and eventually reach the end of the exit ramp. The promised land – not one, or two, but three gas stations! Hallelujah! 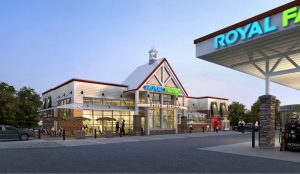 I make a beeline for the station with the largest mini-mart, a Royal Farms. Just inside the RoFo is a sale tower of 2-liter Sprites and Cokes. I pick up a Coke, pay the $1.05, exit the store, then promptly dump its contents into the gutter. I think of Nora, who loves Coke and would be a little distressed to see it wasted like this. (I like Coke too and I contemplate how I’m pretty sure that little shared affinities like this are part of what make us a good couple.)

I fill the plastic bottle to the top – just over half a gallon of gas. I check my app – it was 1.1 miles to get here, so all I have to do is jog that far again, with 2 liters of gas this time.

Back on the cloverleaf, I see a distressing sight on the interstate: Emergency vehicles – a police car and a tow truck – racing by. Already? They can’t impound my car after I have come so close! I increase my speed, even though I am already panting too heavy.

On the highway shoulder now, I see that the cop and the tow driver have stopped short of my car. When I approach, I find them attending to an accident that’s been relegated to the same shoulder. There is barely room to squeeze by. I get through, but am halted by a “Hey!”

I turn around to face the policeman. I wonder what he must have thought at that moment. I’m out of breath, sweating profusely, eyes bulging, carrying a homemade explosive in my hand. I calm my nerves and explain the situation, oozing my utmost sincerity. It works!

On to the Scion, where I drain the gas into the tank. Back behind the wheel, I’ve never been more excited to hear the engine catch and roar to life. I accelerate on the shoulder, then ease back into my normal commute.

Running way late, and part-way to work already, I do a rough calculation – I’ll just be able to make it to work without another stop. Then I’ll run out during lunch for the fill up.

Well, now I know exactly how far my car can drive on 2 liters of gas – 18.9 miles. Or .5 miles short of work. I can’t believe it! Off the highway now, I pull into the road’s center turning lane and apply my flashers again.

Nothing to do but retrieve the same Coke bottle from the back and jog a quarter mile to a Shell this time. It’s hard to explain, but the second time feels almost routine, like I have a certain comfort level in the process. Maybe the lack of vehicular meteors flashing past played a role in that improved outlook.

I’ve told you about my Dad’s obsession with cheap gas, but I didn’t mention his dual obsession with draining every drop from a fuel tank before refilling. Had I inherited that same eagerness to take risks and push the envelope? And how does that translate into other areas of my life, like my personal finances?

The Bible has a number of references as to how the sins of the father are visited upon the son. I sometimes can’t help but notice when I repeat a behavior that my Mom or Dad was known for, both good and bad. You spend a couple decades of your formative years with them, so that’s not surprising.

It’s not a sin to run out of gas, but maybe arrogance is a contributing factor. And perhaps this experience would give me a better awareness of other times when I mindlessly emulate things I learned in childhood, from my parents and others.

I know one thing: I’m going to do what’s necessary to not run out of gas again. Not even once, much less twice.