You are here: Home / Travel & Finance / Road Tripping through Kansas on $35 a Day

Pippa’s 17-year-old cousin Liz has always wanted to visit Kansas. I’m not sure why.

This summer, before both hit their senior year and the unknown that follows, Liz decided it was now or maybe never. So she recruited three people to go with her:

July was the best time for everyone, although Pippa also planned to visit Grandma (Nora’s mom) around the same time. So it was agreed that she would fly from Denver to Kansas City, for pickup by the group.

On July 17, Liz, Brittany, and Grammie rolled out of Baltimore in Grammie’s PT Cruiser. They had three Airbnb reservations – for the first three nights – but everything else would be arranged on the fly.

It wasn’t discussed, but it was generally understood that this would be a low-budget trip. Liz, Brittany, and Pippa are all poor high school students paying out of their own pockets, and Grammie was deliberately not underwriting any group activities. After all, these girls are on the cusp of adulthood, and any cheating might retard their development.

Grammie supplied the car; the girls bought the gas.

The first night’s stop was Indianapolis. After they checked into their Airbnb, they discussed dinner. There were three casual restaurants within a short walk.

“I’m just going to stay here,” said Brittany, launching a mini stretch and a yawn. “I brought some food with me.” She pulled out a blue insulated lunch bag.

“Don’t be silly,” replied Grammie. “You’re coming with us – you can bring your food with you.”

Brittany reluctantly agreed. Seated in the restaurant, she kept her bag out of sight under her chair. Grammie and Liz both had hot dogs, while Brittany discretely pulled little morsels from her bag throughout the meal.

The next day, they drove the rest of the way to Kansas City International Airport. Pippa popped out at the appointed hour, and Grammie announced: “Girls, Kansas City has some of the best barbecue in the world, and Joe’s Kansas City Bar-B-Que reportedly has the best in Kansas City! It’s not far from here!” She was feeling very satisfied about the pre-trip research she had done.

No complaints, so Grammie punched up google maps, and one of the girls maneuvered the Cruiser into traffic. All three had recently gotten their driver’s licenses.

It wasn’t long before they pulled into Joe’s parking lot. They could see a line snake out into the parking lot.

Inside, it was rocking. Lots of noise and little tables positioned close together. They perused the menu: 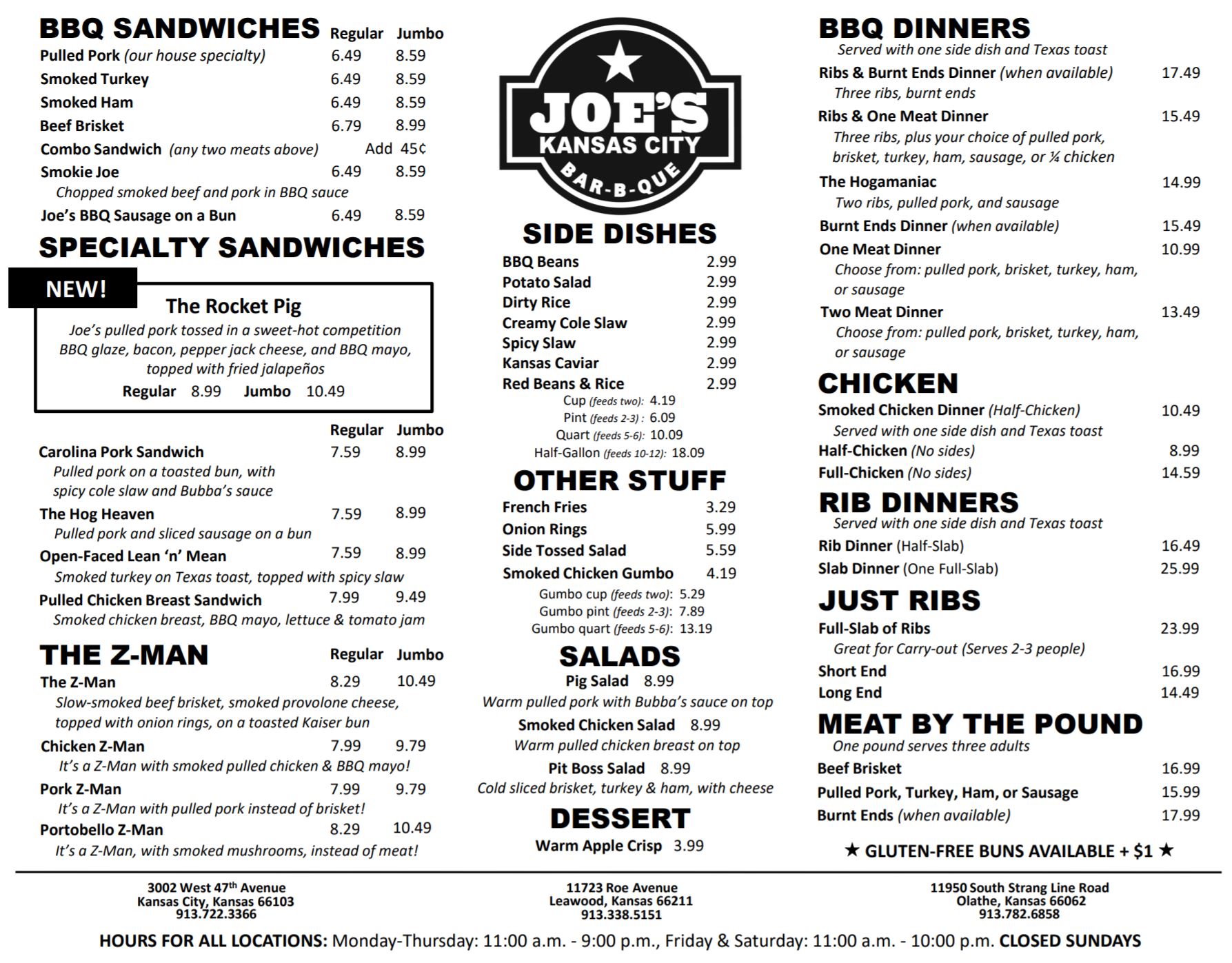 “I have to get the ribs,” Grammie said after just a few seconds, slamming the menu closed.

Liz and Pippa each ordered the regular pulled pork BBQ sandwich. Brittany got the smoked chicken gumbo. Everyone drank water. The final bill:

Obviously, Grammie had the most food, so she gave each girl a rib, and shared most of her cole slaw and texas toast. All of which was hungrily devoured.

“How was the gumbo?” Grammie asked Brittany.

“Not my favorite,” she replied. “It had a weird taste.”

Brittany didn’t say anything then, but it soon became obvious that either:

Before long, Liz informed the rest of the group that Brittany had a $3 per day food budget.

“Whoa,” said Pippa. “So that okra gumbo thing she ate at the barbecue place was a splurge?”

Liz provided additional background: “As you guys know, Brittany is leaving for Thailand next month, for a two-year stay. She’s teaching English for a Christian organization. She’s saving up every cent so she can buy a motor scooter when she gets over there.”

It all made sense now, but for the rest of the trip to be successful, everyone would have to re-calibrate plans…and expectations. They had planned for a low-budget trip, but this was going to have to be Marianas Trench low.

In retrospect, it’s amazing how creative you can be when your budget is minuscule. After that Joe’s KC BBQ restaurant visit, there were no other restaurant stops the rest of the way. For sustenance, they relied on a few tactics.

1. Stre-e-e-etch the goodwill of Airbnb hosts. This was the #1 tactic. Every night they stayed in an Airbnb, ranging from $28-$60 (that’s $7-$15 each). Needless to say, most of these didn’t advertise breakfast, but that was the first thing they asked when they checked in: “You have anything we can share for a light breakfast?” The hosts were, without exception, happy to oblige. In fact, they hit for the full cycle at one: Dinner (pasta, sausage, cake and hot chocolate) when they checked in, breakfast (OJ, milk, tea, cold cereal, bananas, crescent rolls, toast with butter and jam) in the morning, and peanut butter sandwiches, bananas and cookies that they packed for lunch.

2. Grocery store visit. Once they stopped at a grocery store for inexpensive provisions: fruit, green peppers, and peanuts.

3. Milkshakes and root beer floats. OK, Grammie did cheat a little. When the girls seemed to flag somewhat, she would boost everyone’s spirits by buying a round of root beer floats or, once, Chick-fil-A milkshakes.

There were savings elsewhere also. The girls used all their charm to convince Chet the mechanic to put their car on a lift and clear – for free – the A/C line that was draining all its liquid byproduct directly into the cabin of the car.

Not that Chet minded. “None of the native Kansans could seem to quite believe that we had come to Kansas for the sole purpose of seeing Kansas,” says Grammie today. “But they all loved us for it.”

For this blog post, Pippa opened up her notes for me to review. After 3,000+ miles, three natural wonders, one national preserve, a zoo, a rodeo, two museums, a salt mine, seven Airbnbs (six for Pippa), and lots of improvised meals, Pippa’s cost was:

Not bad! I’m proud of how these young ladies were able to honor their friend’s unstated need to keep expenses cellar-dwelling, without impinging on any of the fun.

I’m just glad I wasn’t along. I enjoy root beer floats as much as the next person, but I get grumpy when they take the place of meals.