You are here: Home / Travel & Finance / RV-ing It on Water – Skippering Our Own Chartered Boat on the Erie Canal

When the kids were younger, our vacation planning went something like this:

Related: Vacationing to France on a Budget – Our Trip to Quebec’s Eastern Townships

The catalyst for one trip began with Nora’s interest in a British canal holiday, which was a natural extension of her burning Anglophilia. (Ever since I’ve known her, she’s had a deep love of tea, British royalty, and Regency period fiction). 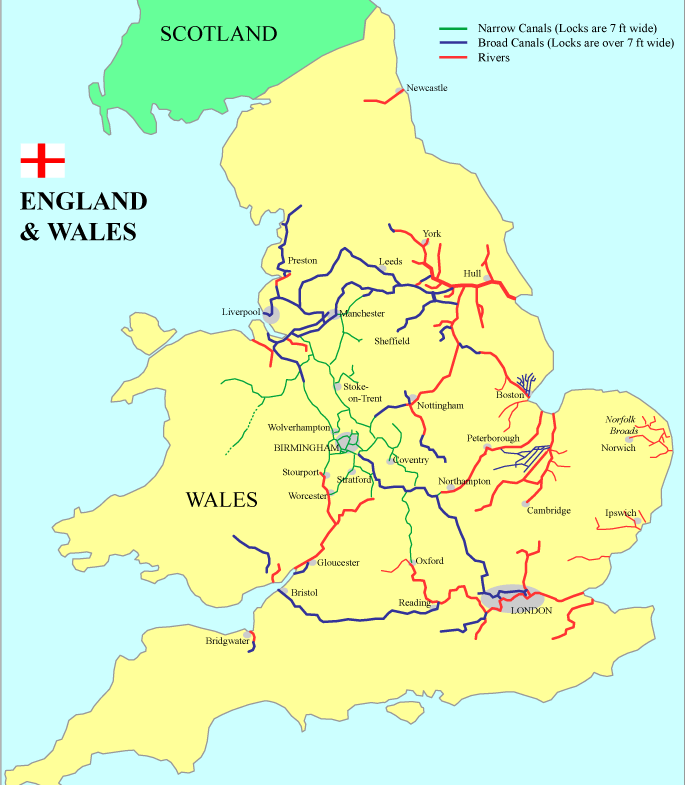 Originally built primarily for irrigation, the UK canal network was transitioned to leisure use in the latter half of the 20th century. Today, there are 2,200 miles of canals and rivers throughout the United Kingdom, all fully navigable by a 7′ X 56′ narrowboat, and featuring cool aqueducts, locks, and tunnels.

But any way we looked at it, we couldn’t swing it, given the cost of airfare to transport the four of us to London.

So Nora got to work – what’s a good stateside alternative?

How about an outfit with watercraft that are patterned after the traditional English narrowboats, is based on an old canal that has been transitioned to recreational use (sound familiar?), and is within a day’s driving distance from Baltimore?

She had found Mid-Lakes Navigation, a family operation that rents Lockmaster Canalboats on the Erie Canal. Designed and built by the company in its own shipyard, the diesel-powered boats are available for charter for 3, 4, and 7 nights. 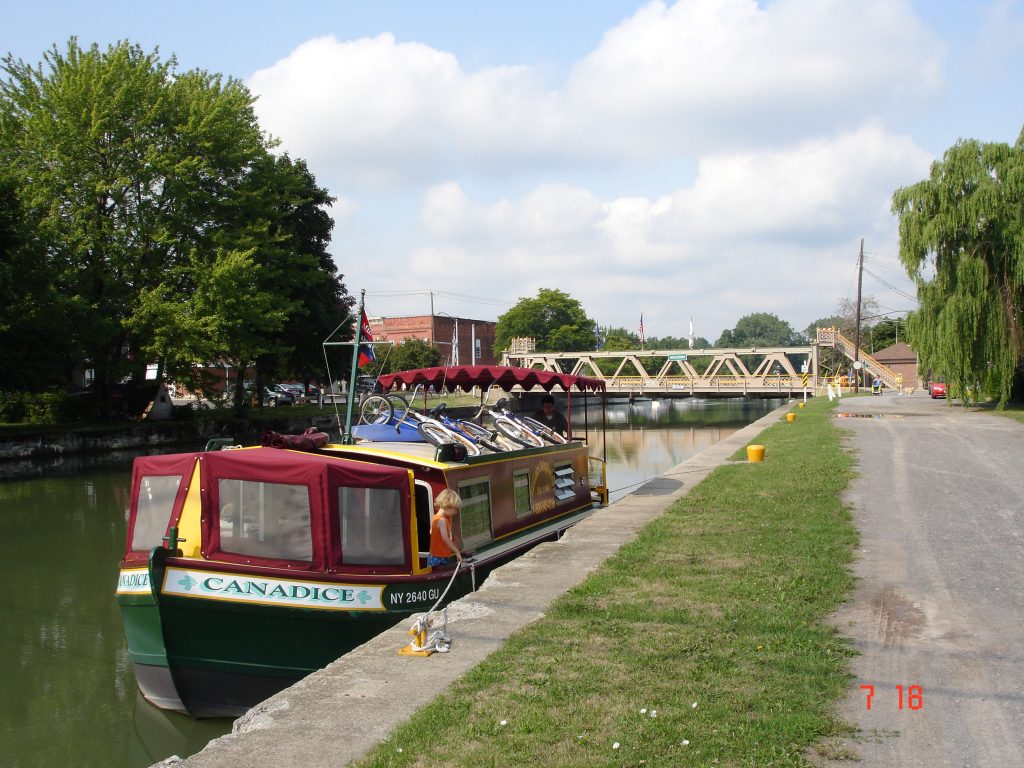 So on a Saturday in July, we drove to Macedon just east of Rochester, NY and for $2,600 we chartered the 34′ Canadice for a week. The cost is all-inclusive (except food): fuel, tolls, docking, orientation and cleaning.

After a quick training that included practice maneuvering through a lock, we were on our own! I’ve never owned or rented an RV, but I imagine piloting the 3-bed Canadice offered a similar feeling of adventure and (comically-large-object) control.

But at a top speed of 6 MPH. This would be a relaxed vacation indeed! 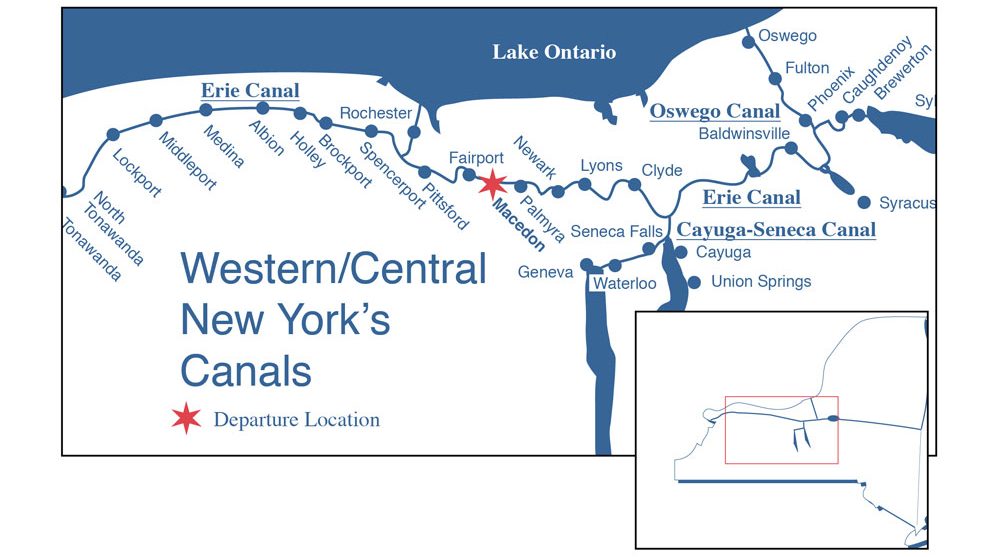 With the option to travel either direction, we chose west. In hand we had a copy of the 72-page Cruising the New York Canal System. We eventually dog-eared this trusty guide that gave the exact mile marker (down to a tenth of a mile!) of each item of caution or interest along the canal.

There is a lot to love about piloting your own boat on the historic Erie Canal, but these things stood out as highlights.

Rochester, We Have a Problem

Rochester is the only place you might call a city on the western Erie Canal, and it’s not even on the canal. Twenty-one miles west of Macedon, you take a sharp right off the canal onto the Genesee River, then dock at Corn Hill Landing. Located on the edge of downtown, Corn Hill is the oldest residential neighborhood in the city and is dotted with beautiful Victorian homes.

From there we walked a short distance downtown, where we read books to the kids in the beautiful old Central Library of Rochester and Monroe County. After a barbeque lunch, we were back at the boat, where…nothing happened. We turned the key and nothing happened! 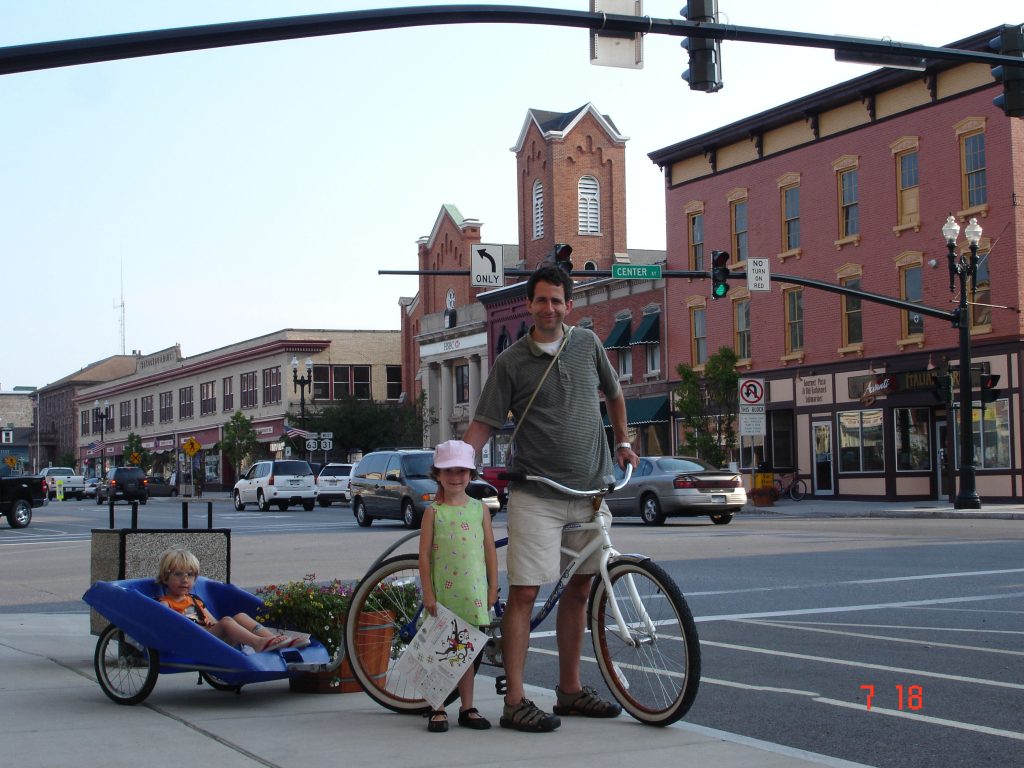 So we put out an SOS call to Mid-Lakes. Fortunately, each boat comes with two bikes and we brought our bike-mounted kid carrier, so we weren’t without options. While Nora waited for help, I pedaled along the towpath once used by mules, with Pippa and Grey in tow. A couple hours later, a mechanic arrived and we were on our way again.

Further along, in Brockport, we were fortunate to cross paths with Lois McClure, a replica 1862 canal schooner on a goodwill tour to celebrate the 180-year-old 524-mile canal system that connected New England, New York, and the west.

To celebrate this history, concessions were offered at throwback prices: 25 cents for ice cream and popcorn!

Further along, we docked in Medina and visited the Medina Railroad Museum. Grey, like most little boys, was train crazy, and was mesmerized by the museum’s massive 204′ X 14′ HO scale train garden.

Appropriately enough, the museum is housed in a retired freight depot built by the New York Central Railroad in 1905. Four of the original twenty-two freight doors were devoted to exporting Heinz pickles that were made just down the road. 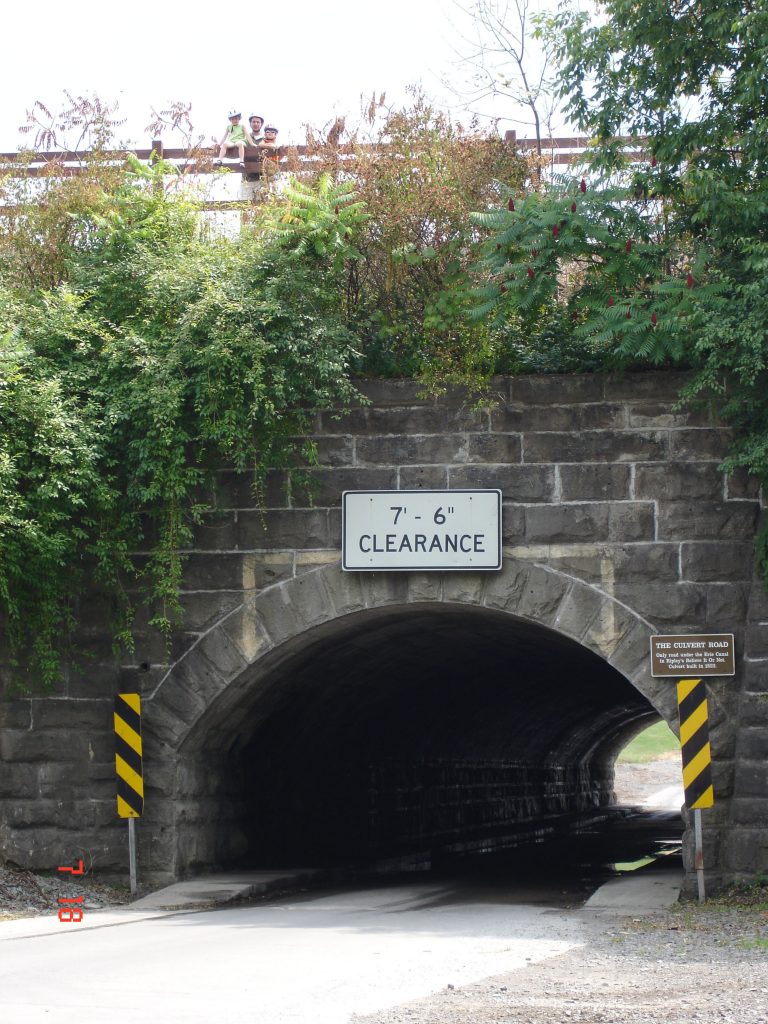 During the same stop, we biked to the nearby Culvert Road, the only road that passes under the canal. Originally built in 1823 and enlarged in 1916, the culvert drips continuously like a rain forest. 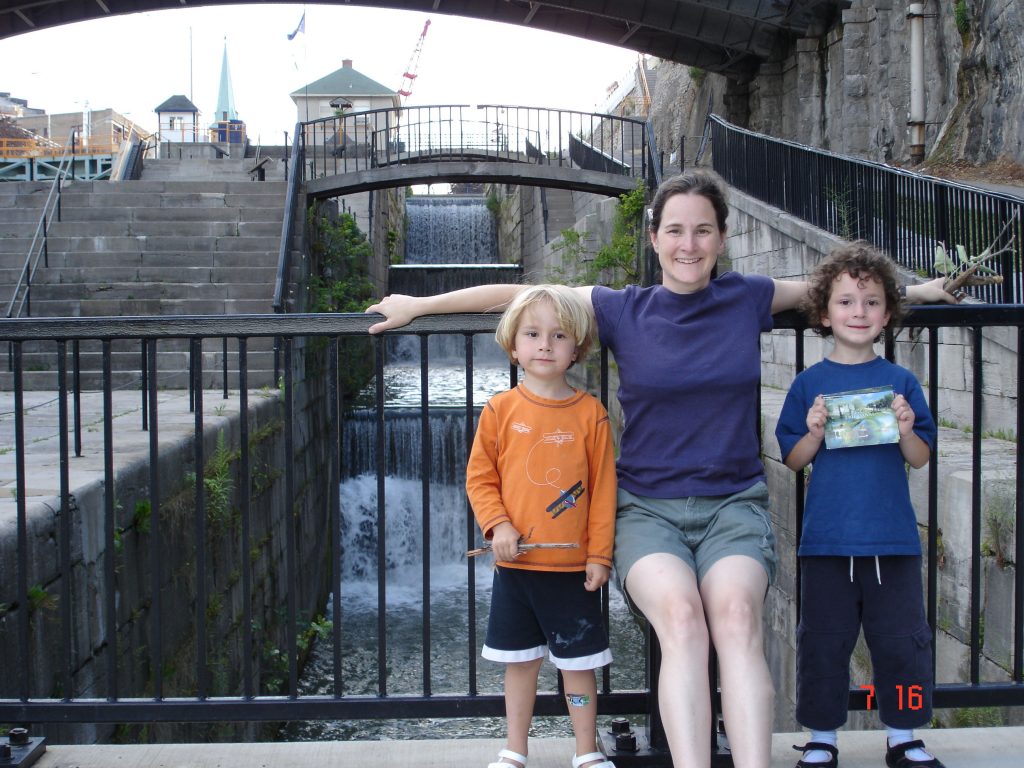 There are locks to navigate all along the canal, but Lockport is unique in its need to lift your boat 49 feet, to the top of the Niagara Escarpment. In 1862, the ‘Flight of Five’ locks opened to great fanfare. These locks are still intact for touring but no longer in use. Today, two back-to-back locks utilize 3 million gallons of water to do the work of the previous five. 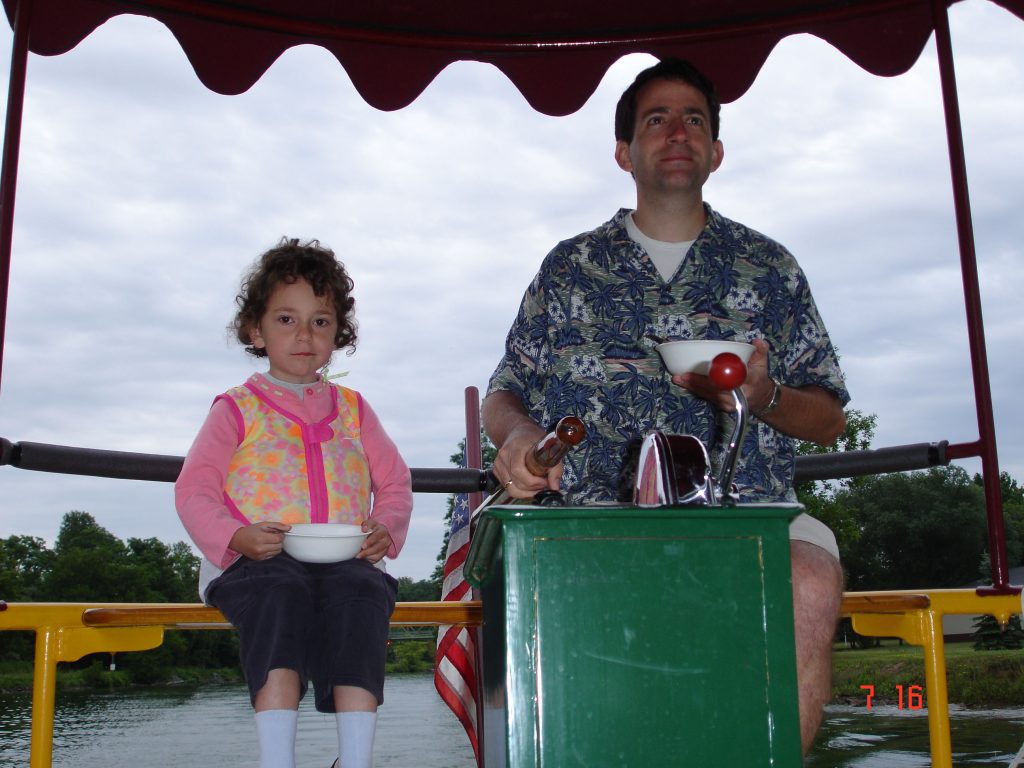 We weren’t sure if we’d be able to make it the 101 miles to the western end of the canal in Tonawanda, given that we only had one week for the round trip, but a couple early morning starts made it possible. 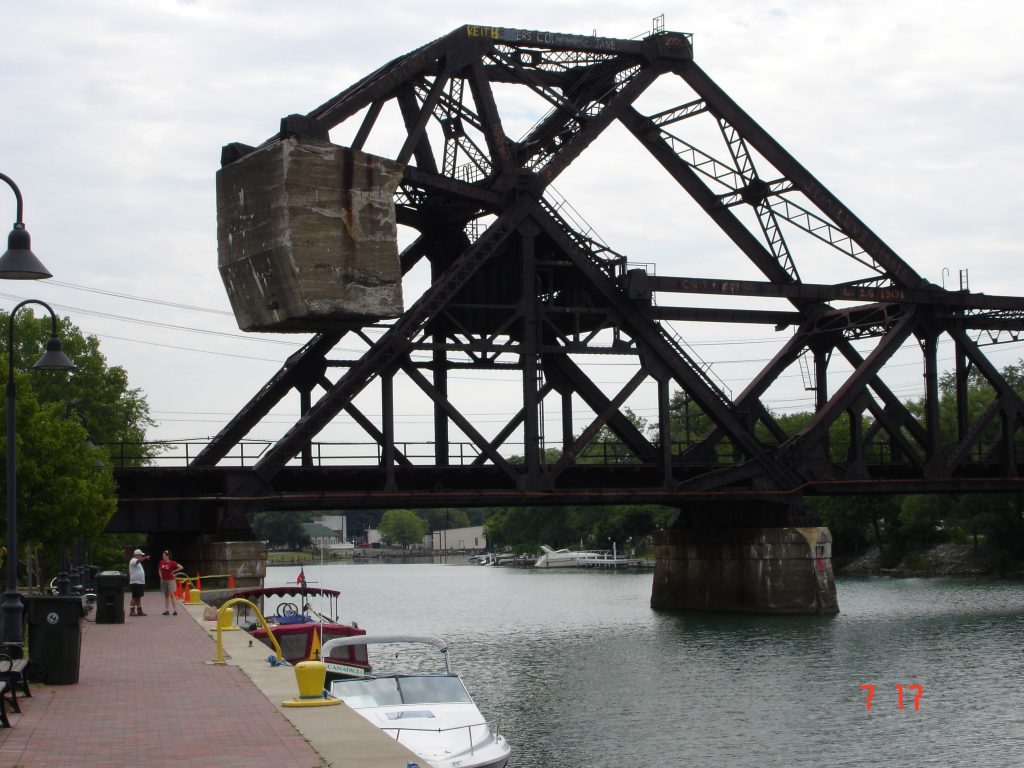 Tonawanda is positioned where the canal meets the Niagara River, half-way between Niagara Falls and Buffalo, which are about 10 miles away. We docked against its massive canal walls and hopped a northbound bus.

What a powerful and awe-inspiring halfway point! 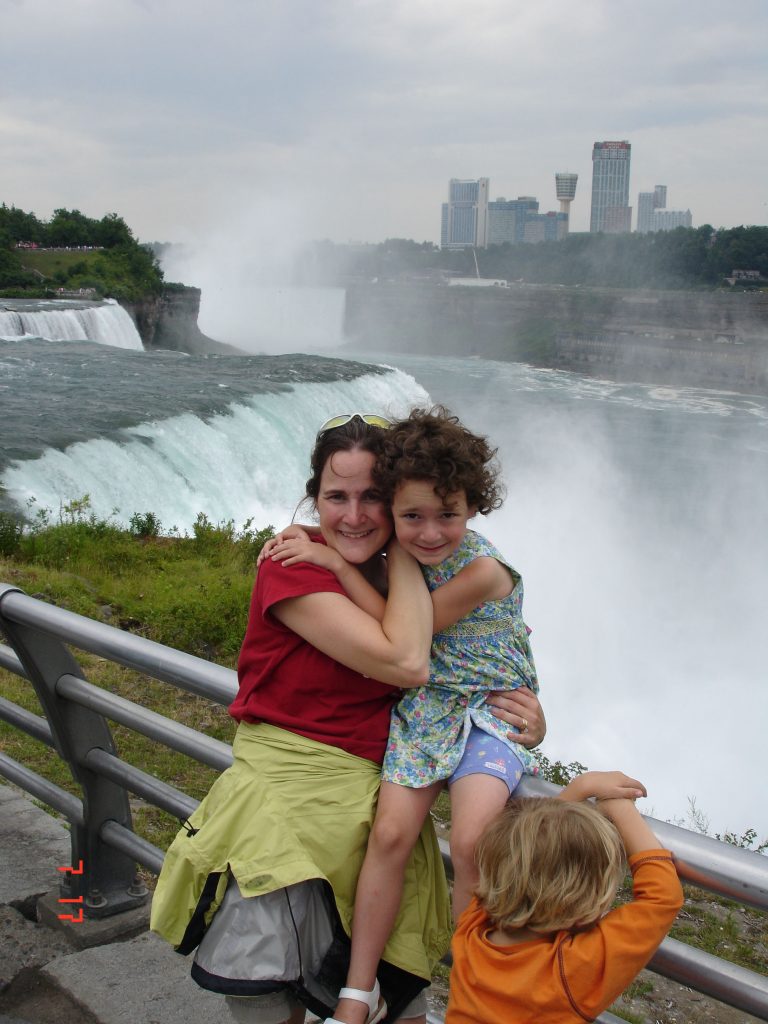 The UK canal vacation would have been lovely I’m sure, but it could be no match for the beauty and grandeur of this natural wonder.

Have you chartered a boat on vacation? How did it go?