A few months ago, our family went to a funeral home viewing for a family matriarch. As is typical, there were a number of people there who we didn’t know. So, in addition to the giving of condolences to her son Liam and his family, there was an equal amount of gaining knowledge about the far branches of the friend/family tree.

It was a somber affair, but I couldn’t help but giggle when I overheard someone ask Nora if she was the mother of Liam’s wife Francesca.

You need to know that Francesca is a few years older than Nora, not 20 or 30 years younger.

For some women (and not a few men), that question would have been devastating. Age-guessing questions asked of middle-aged women are as much of a minefield as asking an early “When are you due?” to overweight child-bearing-age women. You might be seen as a clever guesser, but you are more likely to make a massive jackass of yourself.

I’d say Nora and Francesca show a similar signs of aging in the face (smile lines, subtle bags under the eyes, etc.), but their hair couldn’t be more different. Francesca has beautiful dark brown hair with red highlights, while Nora has gone partially gray. Pretty typical for a mid-forties woman, though you might not know it in beauty-obsessed America.

Nora takes aging in stride, and even revels in it a bit. She tells the kids that each hair that turns silver is a sign that she did something wise. And she’s been tickled pink by the trend of young people dying their hair gray.

Hair care (coloring and cutting) is one of those things that doesn’t cost much on a monthly basis, but it really adds up year over year. Especially for women. So we have made a concerted effort to avoid hair maintenance expense, without looking too much like Wolverine (me) or Medusa (Nora).

How do we do it? Getting free trims, avoiding disposables, and going au naturale.

I’ve been getting free trims from my Dad since I was an infant. I can count on one hand the times I used someone else – a couple times when I was away at college in Maine, and once when I spent the summer on Mount Rainier in Paradise, Washington (yes, the closest thing to heaven on earth).

Sure, I get the occasional nicked ear or random scalped spot, but he’s pretty good for an amateur. He’s even received a few out-of-family gigs, including a last haircut deathbed request. You know you’re trusted when you get the commission for the Eternity Cut.

Naturally, we’ve continued the free trims tradition with Pippa and Grey, with Nora or my Dad doing the honors. It’s important to not make paid cuts forbidden fruit, so they have had the option to use a pro barber/stylist – and they have tried it – but they always return to the kitchen stool. Grey more than Pippa, since long flowing hair remains the fashion for girls today.

You’d think razor blades are diamond-encrusted, considering what they cost. But no, that’s just a result of the Blade Wars, where manufacturers compete with each other to cram the most blades (and technology) on one razor head. And like copier toner, blade sales are big cash cows. Read more about the Razor-Razorblade Model here.

So I use an electric razor for my daily shave. I know, I know, the cut isn’t quite as close, and I’m not fully in touch with my forefathers/masculinity, but I’m able to do 90% of my morning shave while reading my Sports Illustrated. That’s gotta be worth something! 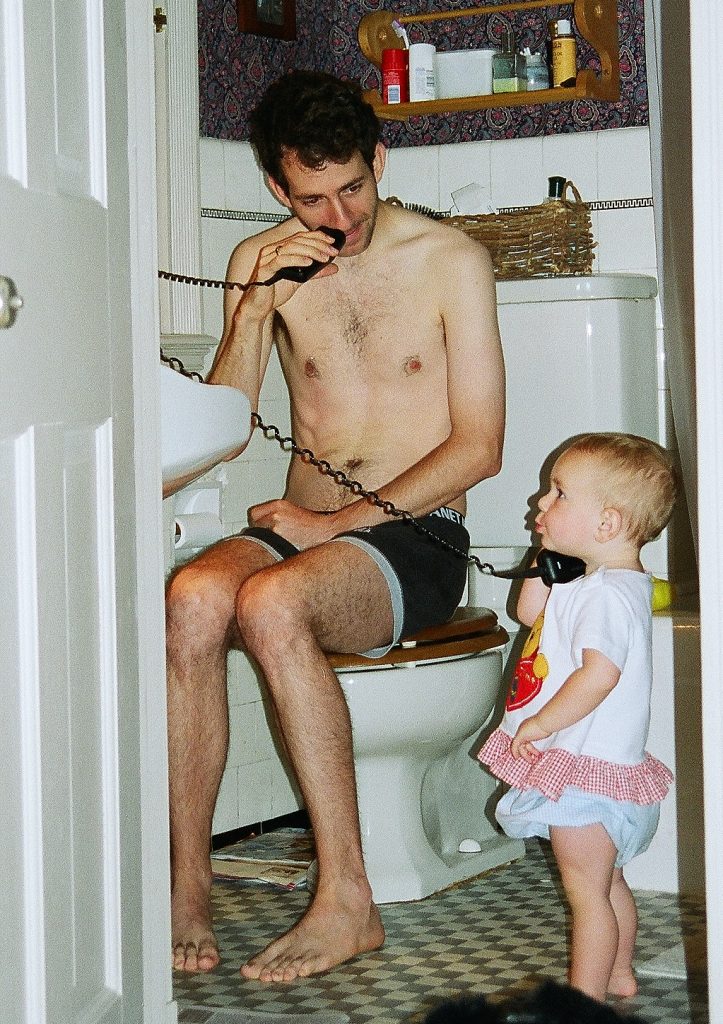 If you really need to be in touch with your forefathers/masculinity, go totally old school like my Dad, who uses a straight razor that he hand-sharpens with a strop. It’s surprisingly efficient (his time record for a shave is 2 minutes, 8 seconds), but it takes some getting used to. I tried it once and ended up looking like I’d suffered a Freddy Krueger facial attack. First and last time for me!

Here he is shaving:

Here he is using the strop to sharpen the razor:

Nora always complains about how everything costs more for women. “If men wore bras, they’d cost half as much,” she says.

As it goes with women’s underwear, women’s hair care costs multiple times that of men’s. Granted, women generally have longer hair, and have more requirements, but no doubt there is a built-in cost bias as well.

Nora’s solution? Skip the salon entirely. It’s not that she doesn’t like to be pampered (she does, especially massages), she’s just a highly pragmatic woman who has done a cost/benefit analysis and determined the benefit doesn’t justify the cost.

Now I know that age discrimination is real, and Nora’s calculation would have a different multiplier if she were a TV anchor (or looking for a job). But she works in a school, where some gray strands signal gravitas rather than senility.

Going au naturale doesn’t include letting her leg and armpit hair go wild, thank God. Nora likes to be counter-culture on a lot things, but she has her limits.

What about you? Do you bite the bullet and enjoy professional hair care? Or make do with home hair care? Why?