These are things that I’ve found interesting but they don’t each deserve their own post, so I’m combining them in a series of vignettes. I’ve never done this before, let me know what you think of this approach.

I started a grocery list, left it on the counter, and came back to this message from 16-year-old Pippa: 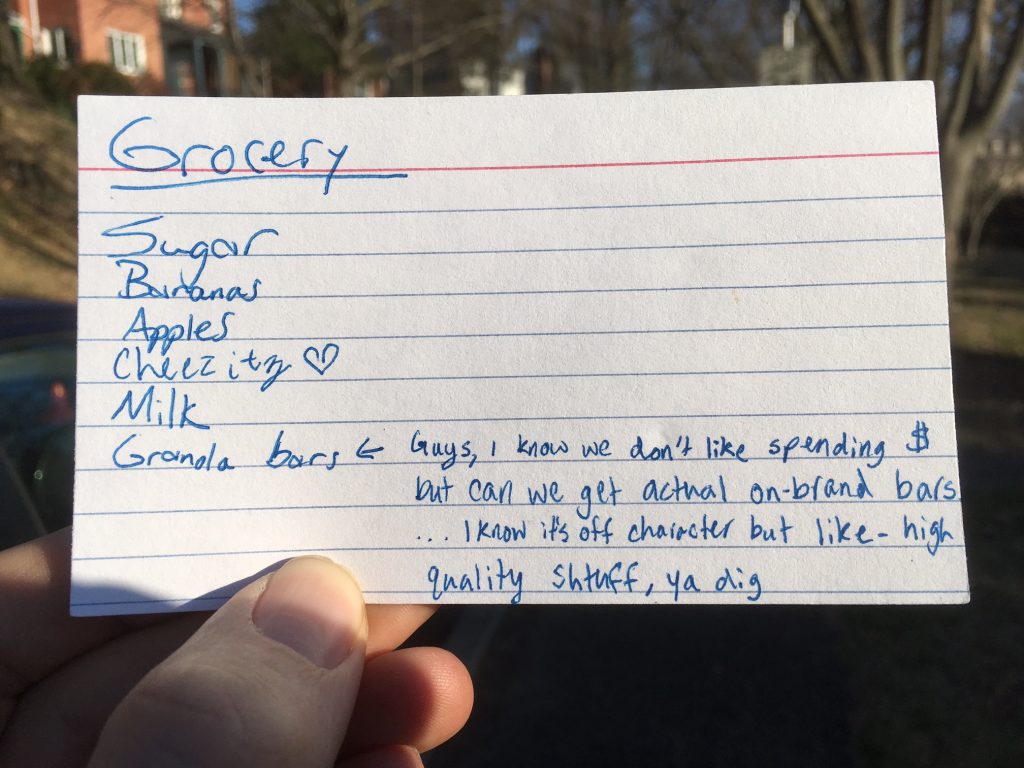 The struggle is real.

Stadium gift shops are the starter drug markets for marital financial infidelity. If you think you are weak, avoid them at all costs. Stick with hot dogs and beer – everyone knows exactly how outrageously expensive they are.

Stop Messing with Negative Perceptions I Have of My Wife! 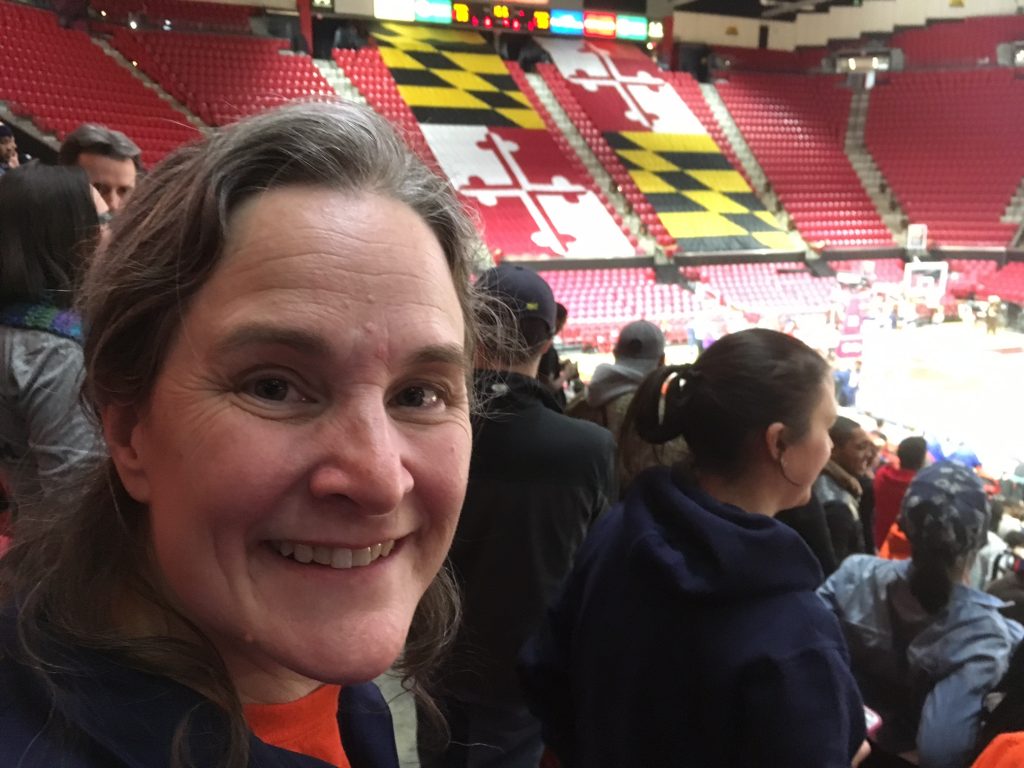 In March, I went with Nora to support her school’s boys basketball team, which was playing an important game at the big Xfinity Center at University of Maryland, College Park. After the game, we got separated and I didn’t know whether to keep looking or give up and meet at the car. Nora doesn’t have a phone, so I couldn’t text/call her. I was annoyed.

Finally I found one of her school friends, who didn’t know where she was either. “Of course, she doesn’t have a phone,” she said. A pause, then: “That’s part of her charm, isn’t it?”

I hate it when my negative feelings are viciously assaulted like that!

I Don’t Really Feel That Strongly about Fracking

I was sitting at home minding my business, when the doorbell rang. It was a guy with a clipboard. How quickly can I get him to move on? 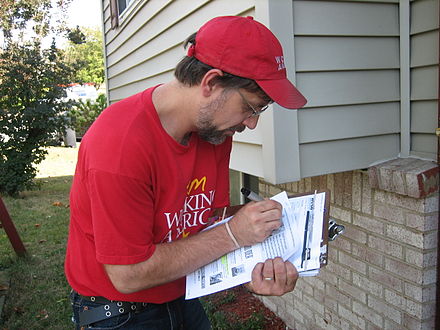 I’m cold without being rude. I keep the screen door between us. He wants to talk about fracking. He was recently in Annapolis fighting for something or other. He’s been going door-to-door for such and such number of days. He’s passionate. He’s earnest. He’s engaging. I open the screen door. We talk some more. I invite him inside. Before I know it, I’ve written Food & Water Action Fund a check for $20 to help ban fracking in Maryland. And I felt good about it.

Before he came, I hadn’t given two thoughts about fracking in Maryland. I still don’t care much about it. But, through his passion, he recruited me to his cause. A good reminder about how to win friends and influence people.

I received a marketing email the other day. It included these lines:

Our heart bleeds for Charlie Brown when evil Lucy moves the football at the last minute. We identify with the victim, not his nefarious love interest, because we’ve all felt the pain.

In marketing, I’m all for the use of cultural touchstones – stories and characters that we have all grown up with and can relate to. Unless, of course, you have the facts wrong and there is no shared touchstone. Then it’s distracting, maddening even.

Lucy as Charlie Brown’s love interest?!? Yeah, and Garfield leads a Zumba class and watches what he eats.

You Get What You Pay For

We have good friends who live nearby. They are frugal like us.

They have a 15-year-old. He wasn’t begging for a cell phone, but they figured they’d get him an inexpensive one for those after school pickups or other emergencies and it could double as an MP3/game player for road trips.

So they turned to discount provider FreedomPop. You pay a low price for a refurbished phone and then get 200 minutes, 500 texts and 500MB of data each month for free.

Here’s the Dad’s take: “It is kind of spotty service on the Sprint network, but the price is hard to beat. Funny thing is the microphone on the phone doesn’t work, so in an emergency, he can call and he can hear me, but I can’t hear him.”

“If only he was harder to hear at home sometimes,” he concludes.

Any Interest in a Broken Toilet as Well?

In a sermon, our pastor told us about his November visit to Ocean City, Maryland. He was shocked to see the Sea Scape Motel being demolished. He had had a transforming church retreat at the motel when he was a youth, and it held an important place in his heart.

He approached the demolition zone and saw the motel marquee tossed on top of a pile of rubble. He asked a nearby worker if he could have it. “Fifty dollars and it’s yours,” he said.

Ok, he said. “After we walk the boardwalk and get lunch, we’ll be back for it.”

He and his wife had a pleasant visit to the beach, then stopped by the work zone on their way back to the car to go home. He approached the same worker.

“You know, another lady came by and offered me one hundred bucks for it,” the worker said.

“Oh. Well, if she wants it that bad, she should have it.”

The worker didn’t miss a beat: “I doubt if she’s coming back though. It’s yours for $50 if you want it.”

Lesson: Always be prepared to walk away, especially if you sense a con. If you are too attached to any earthly thing, you are susceptible to being taken advantage of by grifters.

I Feel Sorta Bad, But… 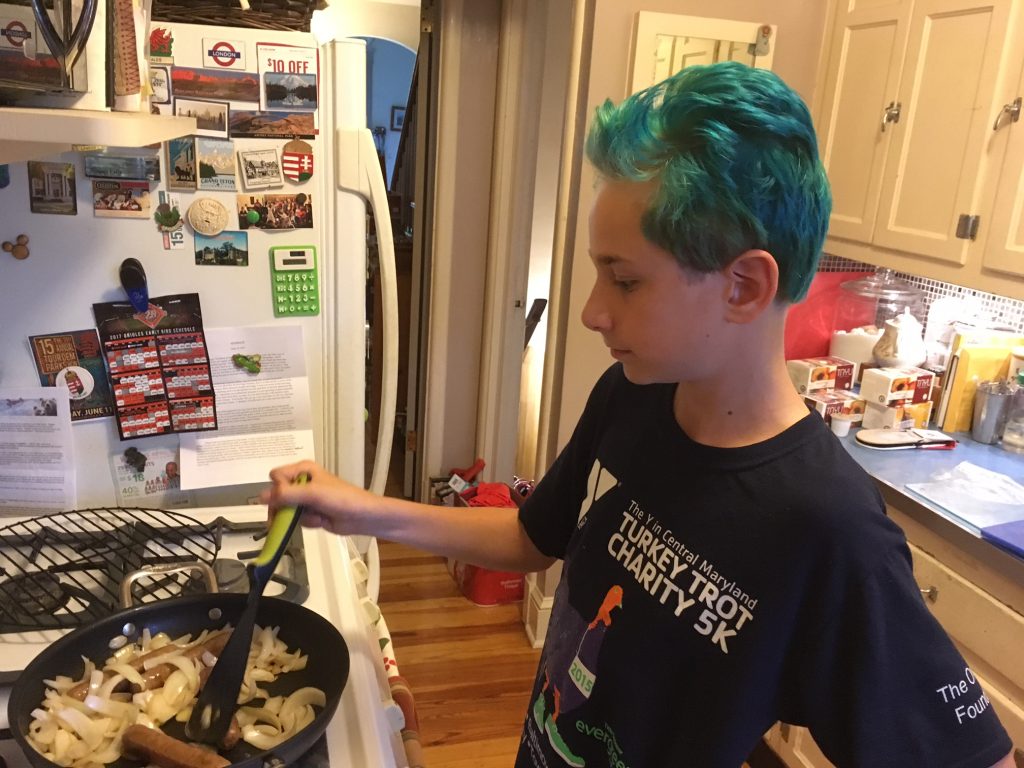 Grey wanted to color his hair greenish blue. Or maybe it’s blueish green. He’s paying for it? No problem.

He’s 14, so he’s responsible for finding the salon and making an appointment. All I’m doing is driving.

He says we are going on Wednesday because they have 50% off on coloring that day only. I am so proud of him!

Come Wednesday, we go, he gets his hair done, he goes to pay and it’s $75 – full cost. Turns out, you need to print the coupon off their site to redeem the offer. He pays the full amount.

Some parents might bail their kid out of such a misunderstanding. It won’t be their last bailout either.

Anything happen in your life this summer that you have learned from?