You are here: Home / Work & Finance / My Time in the Bathroom When I Should Have Been at My Desk 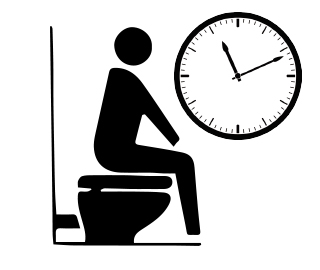 I had a former job where I spent extended periods in the bathroom. I know what you’re thinking: Poor Barnaby. Must have be suffering from urinary tract infections or chronic explosive diarrhea.

Well, I wish that were the case (ummm, maybe not), but the truth is more embarrassing: I saw work as a time when I could catch up on my pleasure reading. I justified it by telling myself that I worked twice as hard and three times as efficiently as my co-workers and I deserved the long breaks.

The cognitive dissonance was strong, but I could block it out. Until one day when I was on a coffee run with Sebastian (more about Sebastian here). Sebastian’s a bit of a gossip (I never complained about it, mind you), and he told me about our colleague Tiffany, who had been caught watching whole episodes of Breaking Bad on Netflix at her desk. Our employer discovered it when the IT department investigated what was hogging all the company network’s streaming capacity.

You should have seen my outrage. How could anyone do that at work? No wonder she never got anything done! And on and on.

It didn’t take long afterwards to hit me: What a hypocrite I am! I thought of Matthew 7:5 – “First remove the plank out of your own eye, and then you can see clearly to remove the speck out of your brother’s eye.”

Beyond the hypocrisy, I felt convicted by Colossians 3:23-24: “Whatever you do, work at it with all your heart, as working for the Lord, not for human masters, since you know that you will receive an inheritance.”

I’m not sure how you measuring these things, but I was probably working at 95% heart, at best.

Why does God call us to work so diligently, even in non-ministry roles? I’m not sure, but it’s hard to argue with the rightness of it – even from a secular perspective. My employer is compensating me for a full day’s work, so I am obligated to give that.

According to Paul’s letter to the Colossians, our reward for hard work is an ‘inheritance,’ but what is that? We know that work won’t earn us a ticket to heaven, so it can’t be that. And it’s certainly not the income from the work, although that’s a nice byproduct.

As is typical, God’s inheritance doesn’t have a $ in front of it. I think it’s simply more joy in the Lord, as argued on Desiring God. When we do what he commands us to, we enter into deeper harmony and fellowship with him.

That’s better than any paycheck.