You are here: Home / Travel & Finance / Top 8 Free and Offbeat Things to Do in Baltimore 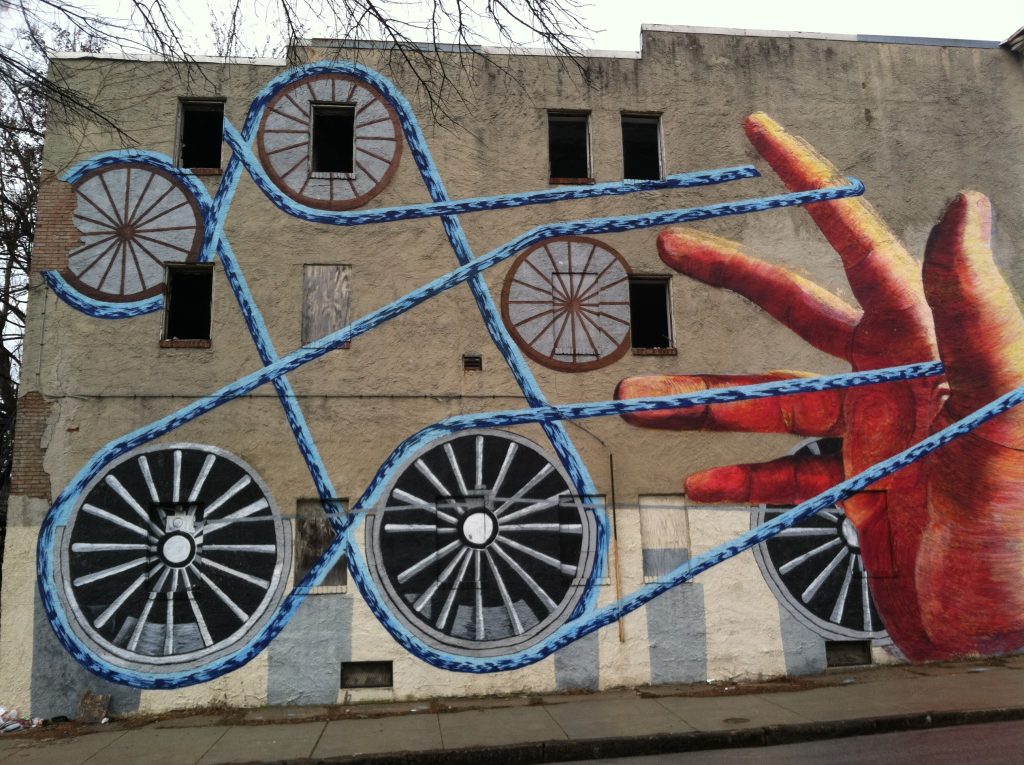 I’ve lived in and around Baltimore practically my whole life, so I’m a bit of a casual expert on what to see and do around town. Especially worthwhile things that are free.

I have a few mantras I stick to:

First, don’t do what everyone else is doing. Someone once said “the masses are asses” and I don’t have any evidence to refute that. On a hot summer day, the Inner Harbor is shoulder-to-shoulder with melting adults and their sticky kids. You’ll find the Ravens parking lot bustling with wobbly tailgating fans, all the way through the game. I think Baltimore’s National Aquarium is a gem, but $40 tickets to squint past two rows of people to glimpse what you might be able to see at your local Chinese restaurant? Really?

Second, just because something is free, doesn’t mean it’s worth doing.

Third, Baltimore is a quirky town. If you spend all your time in the Inner Harbor at Ripley’s Believe It or Not and Shake Shack, I feel sorry for you – you are missing out on what makes Baltimore unique…and charming.

The Book Thing suffered a major fire in March 2016 and a city mourned. It shut down and no one knew if it would recover.

Last weekend it reopened, and a city rejoices.

The concept is simple: The Book Thing is the world’s largest ‘Little Free Library,’ housing over 200,000 books.

We’ve been going to The Book Thing since when it was located on Charles Street, over 15 years ago. (It has moved to the Abell neighborhood off Greenmount Avenue). It always seems to be on the precipice, about to cease operations. But it never does.

Unlike a library or bookstore, you don’t go to The Book Thing looking for a particular book. You just go looking, and you never come home empty-handed. It’s the best…searching for the right word…thing.

Let’s face it, Baltimore has a lot of ugliness. Literally.

Houses are sloppily boarded up. Trash is everywhere. Rats rule the streets. Even snow doesn’t help brighten things for more than a day or two.

Baltimore has a lot of beauty too. The spectacular view of the downtown skyline from atop Federal Hill. The vibrant glowing neon of the hulking Domino Sugars and Natty Boh signs. The orderly lines of sailboats along the docks of Canton. Determined humans that model every skin shade from alabaster to midnight. 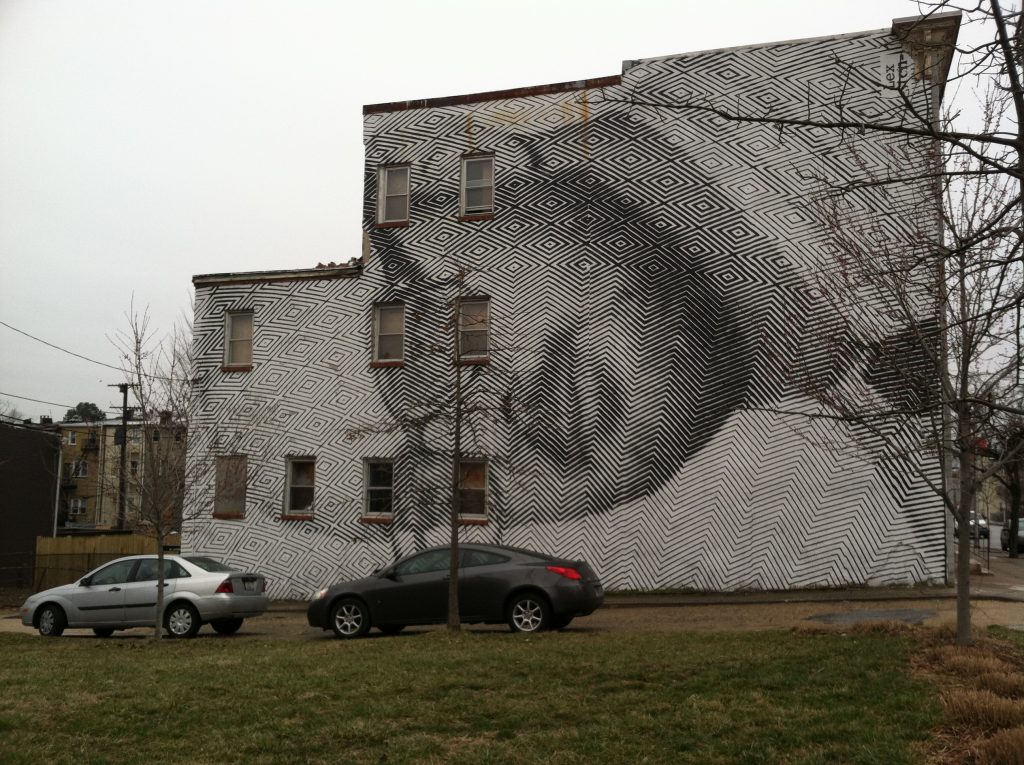 Combine the ugly and the beautiful and you get the stark beauty of Baltimore’s 250+ wall murals, which are often painted in blighted neighborhoods.

One such area is Station North, which has recently become more respectable. It’s now a hub of artists and edgy pop up stores and restaurants. And as a result of Open Walls Baltimore, it boasts dozens of wildly disparate murals that sprawl across multiple stories. Curated by Gaia (the Baltimore Banksy), the project attracted talented street artists from all around the world. 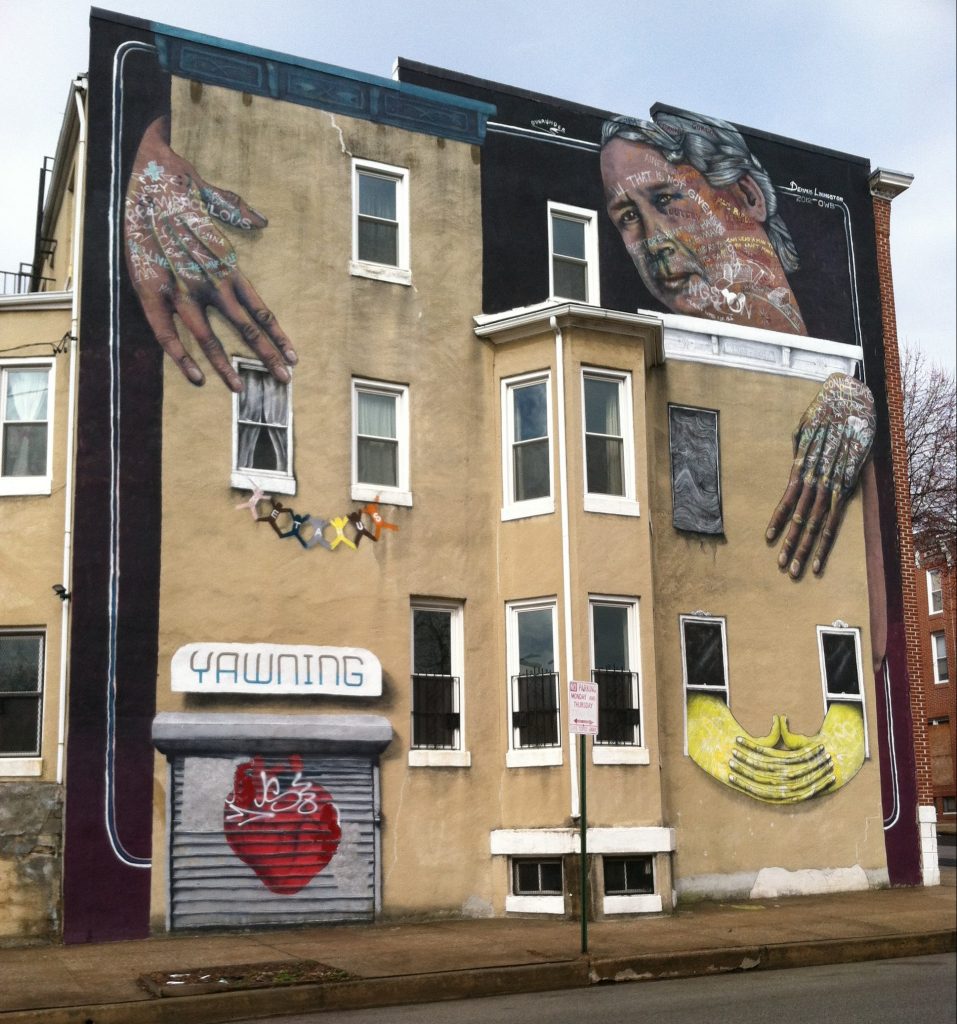 Just go. I adore these inspiring larger-than-life murals, and you will too.

You can see another mural in one of my recent posts.

It seems like everything is segregated now. Schools, churches, neighborhoods. The places that aren’t – NFL games, the airport – are socio-economically segregated.

One place that’s still wildly integrated in all ways? The farmer’s market, my favorite place to people watch.

If your favorite amusement park is Disney World, you’ll like the Sunday morning farmer’s market downtown under the Jones Falls Expressway. It’s big and loud and has something for everyone. 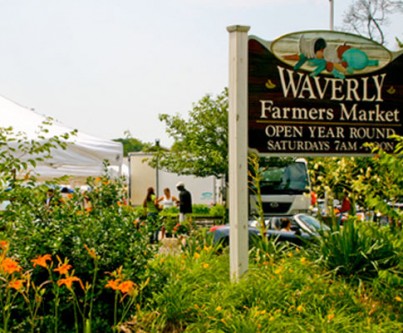 If your favorite amusement park is Dutch Wonderland (Pennsylvania), go to the Saturday morning farmer’s market in Waverly in North Baltimore. It’s intimate and friendly, and, unlike its big brother downtown, is open year round.

Visiting either market might cause you to bump into one of two things that could benefit you:

Normally, conventions are about as interesting as cardboard, but this being a ‘free and offbeat Baltimore’ list, were not talking about the “3rd Semi-Annual Symposium for the Mid-Atlantic Real Estate Mortgage Brokers Office Managers Association.” 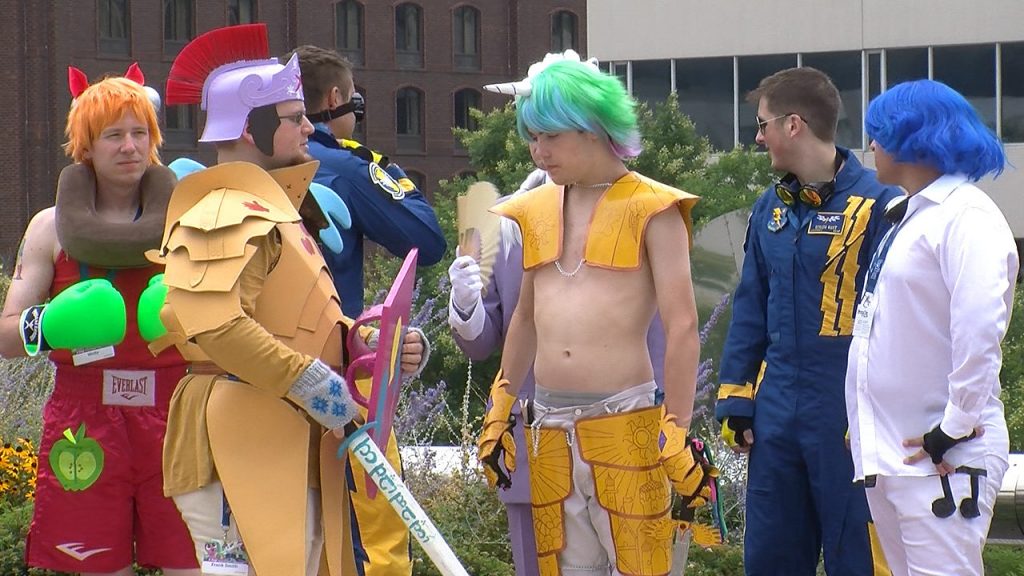 No, I’m talking about grown men in pony costumes. I’m talking about BronyCon, the world’s largest convention for fans of the animated TV series “My Little Pony: Friendship is Magic.” Fans who are 85% male(!), according to a 2013 survey.

The Brony phenomenon is so weird and popular, that when someone offered to make a documentary to explore it, it broke Kickstarter, becoming the second most funded documentary project in the site’s history. The result is Bronies: The Extremely Unexpected Adult Fans of My Little Pony and is all yours for $19.99.

Starting out as a one day event with just 100 attendees, BronyCon has grown over the years to a weekend-long extravaganza drawing over 9,000 fans from every corner of the globe. The next one is July 27-29, 2018.

In a similar vein, but less ‘unexpected,’ is Comic-Con and Otakon. Both are Baltimore fan conventions, until Otakon decamped for Washington, D.C. this year. Which is sorta like hearing that your weird artsy cosplaying cousin is moving to stuffy Georgetown.

Fort McHenry is the home of amazing history from the birth of our nation. That’s important school stuff, but when we go there, we skirt the visitor center and old fort cannons and ramparts (always wanted to use that in a sentence!), and make a beeline for the water. We unfurl a blanket in the shade, empty our picnic basket, and just laze there, feet from the lapping water. 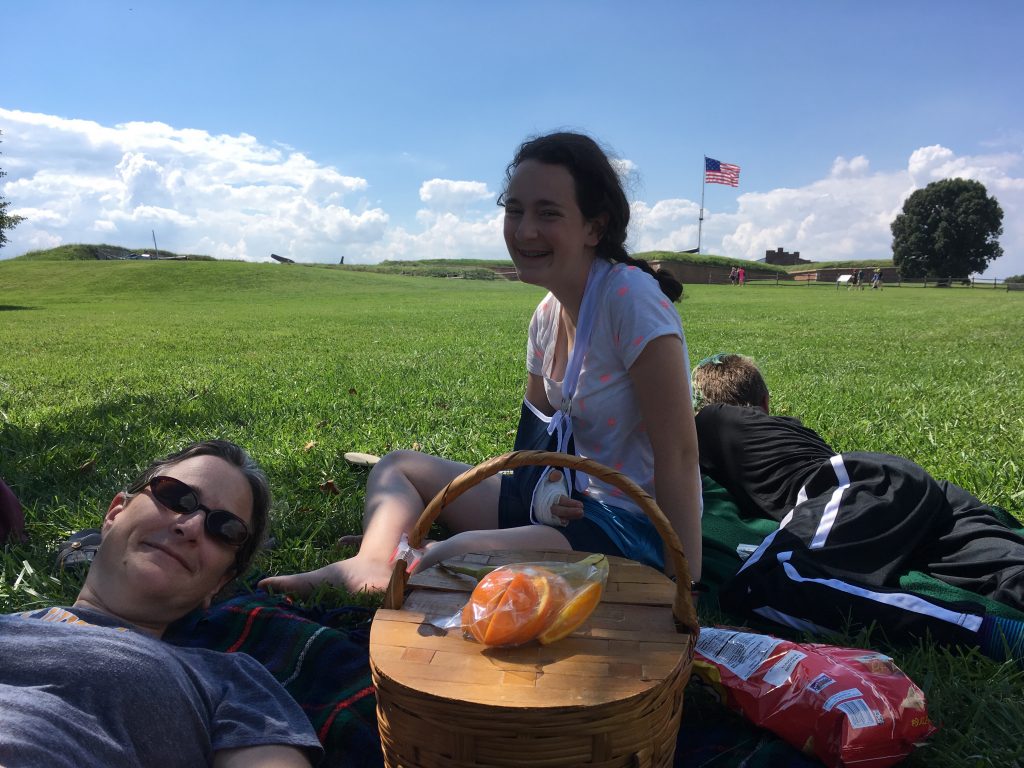 The same reason that the peninsula end was a good strategic defensive location, makes it an awesome vista to appreciate nature, and Baltimore’s gritty industrial waterfront. And constant boat traffic (from tugs to sailboats) keeps the scenery ever in flux and interesting.

Note that the fort gates close at 5pm, so if you plan to picnic, brunch or lunch is your best bet.

What makes a great parade? Is it plastic-smiling and waving politicians walking behind a car draped with their campaign signs? Is it kids walking aimlessly behind their school/troop banner? Is it an endless line of nausea-inducing cars revving their engines, but going nowhere fast?

No, it’s music. And Baltimore’s St. Patrick’s Parade has the best music. Scores of Irish dance troupes that perform on wagons or on the street, to high-kicking jigs and reels. Pipe and drum bands that wail mournfully, then joyously. Even a few wacky mummers groups come down from Philadelphia.

This isn’t official; it’s something I’ve developed over the years and can easily modify based on the interest of the visitor. It’s one of my more popular Free Baltimore items because who doesn’t watch TV and movies and deep-down love celebrity life? Even Hollywood-hating Trumpsters peruse the People magazine (or is it National Enquirer?) in the grocery checkout line.

This Top 8 list is almost exclusively city focused, but this tour starts with a drive north of the city to Glen Arm, where Julia Roberts and Richard Gere nearly got hitched in the church scene in Runaway Bride. Not an Oscar-caliber movie exactly, but it’s worth popping corn for, and, more importantly, my mom was featured as a wedding audience extra (for about 1 second). The best time to visit is 9:30 am on Sunday, when you can see the outside and inside, and catch a worship service!

From there, it’s back to the city, to explore sites associated with three famous writer/director natives: John Waters, Barry Levinson, and David Simon (who’s actually from DC). 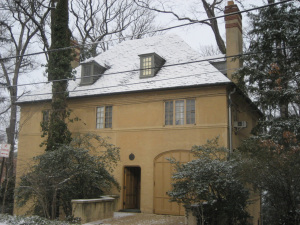 John Waters doesn’t live too far from us (when he’s in town), so we always do a turn by his house, which is surprisingly conventional-looking for such an anti-establishment guy. I’m not a fan of his early degenerate films, but later efforts like Hairspray are more respectable. Swing by Mergenthaler Vocational Technical School, which was used for high school shots, then motor over to The Avenue (see ‘Funky Hampden’ section, next), where many scenes were filmed.

Barry Levinson made the iconic Diner (1982) in Baltimore, launching the acting careers of Mickey Rourke, Kevin Bacon, Ellen Barkin, and Paul Reiser. Amazingly, the same diner building is still located in Baltimore, near city hall, and you can still eat in it – it serves as the home for fancified indoor picnic tables as part of a Food Truck Park. It’s seen almost as much work as a Hollywood back lot – the same diner building was also featured in Sleepless in Seattle, Tin Men, and Liberty Heights.

David Simon and I go way back. I read his Homicide: A Year on the Killing Streets book early on, and watched a bit of the TV show (Homicide: Life on the Street) based on it. So a trip to Fells Point is a must do, to see the facade that was used for the police headquarters. And now you can step inside this 1914 Recreation Pier building for a glimpse of the stunning Sagamore Pendry Hotel redevelopment. I’m sure there are lots of Simon’s The Wire set locations around town too (including, you guessed it, the diner), but I never watched that show much, as it felt too cynical and depressing.

Other TV shows that are/were shot in and around Baltimore include Veep and House of Cards. The Sun has a cool map that shows shooting locations for these.

Baltimore suburb White Marsh, famous for its mall, decided a number of years back to do an alternative retail development: The Avenue, its re-creation of downtown shopping. One word: NoThankYou. Why create a fake street with mall stores and restaurants when you can window shop on a real city street, with all non-chain stores?

Hampden, in North Baltimore, has a funky vibe, with an odd mix of hipsters, yuppies, and even some natives (blue collar whites), who haven’t been pushed out yet. There are over 100 stores and restaurants, almost all of them unique.

Coming soon on this blog: Top 8 Free and Offbeat Historic Things to Do in Baltimore. Stay tuned.

What are your favorite free things to do in Baltimore?